Covid-19 and the Money Mine 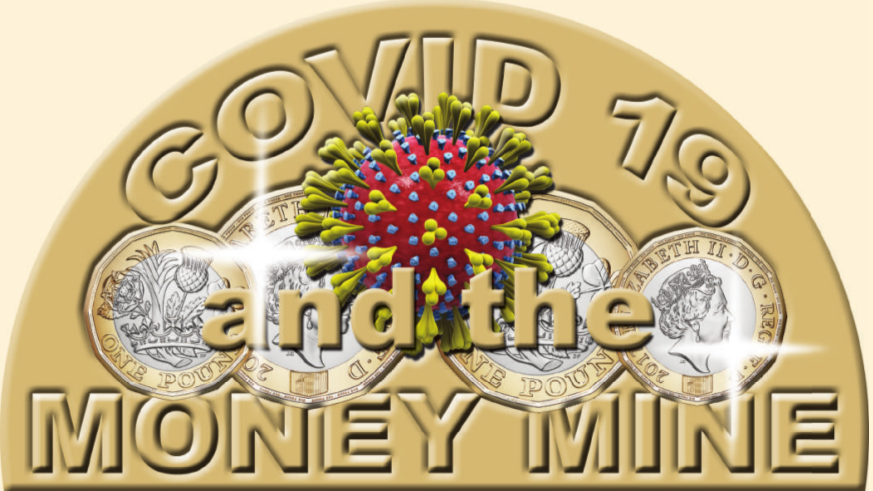 Capitalism has not directly caused the covid-19 pandemic. This coronavirus is by no means the first, and will not be the last, species-jumping outbreak. Nor could socialism guarantee to prevent something like this happening as it is a natural process. However, its rapid spread to ill-prepared recipient societies is most certainly exacerbated by capitalism.

Capitalism has become global while retaining national structures. It is this contradiction that allowed the virus to wreak the havoc it has. The competition engendered by those national structures restricts coordinated international action to temper the worst effects of the disease.

Presently, there is some supra-national cooperation into antiviral and vaccine research, no doubt spurred on by inhibited profit-making caused by national lockdowns. But, stable doors and bolted horses come to mind.

Of the 18 major pharmaceutical companies, 15 had withdrawn from research and development in vaccines, antivirals and antibiotics. There just wasn’t sufficient profit to be generated, unlike from addictive painkillers, tranquilizers and impotence drugs.

Similarly, ventilators and PPE equipment could have been manufactured and held in storage. That a pandemic of some sort was more than likely, and its effects devastating was shown by the Cygnus flu simulation exercise in 2016, and a similar exercise in Scotland in 2018, but the logic of capitalism dictated that no preparations were made.

Why go to the expense of manufacturing, purchasing and storing equipment for something that may not occur? A question and logic that does not seem to apply to the insurance business. Health services, such as the NHS, had endured over a decade of restricted funding that would have made buying preparatory materials beyond their means. And governments wedded to austerity most certainly wouldn’t provide the funds.

Here is the crux. Capitalism has been in a financial crisis of sorts for over a decade. It seems the international debt, which had increased from $84 trillion in 2000 to $173 trillion in 2008, now stands around $250 trillion. A debt more likely to rise than ever to be paid off.

This is the context in which national governments operate. They must protect capitalism, as they did by intervening during the financial crisis of 2008 to prevent banks becoming insolvent. It is imperative that interest rates are kept as low as possible so as not to exacerbate debt levels.

Central banks, through quantitative easing, supply ‘new money’ and indulge in purchasing debt. The major beneficiaries of this policy are the largest national capitalist concerns because, being already relatively rich, means they are safer havens for that ‘new money’ and cheap credit. Those teetering on the brink of bankruptcy, countries as well as companies, can go to the wall.

Meanwhile, the working class, through whose labour power all value is created, face increasing impoverishment. New and increasing debt causes governments to pursue austerity. Those who advocate using government spending to satisfy the needs of the majority and so increase consumption run up against the danger of provoking inflation driving interest rates up.

As prime minister, Theresa May declared there was no magic money tree. The pandemic, though, seems to have opened up a money mine, and deep mining there is taking place. Just as capitalism didn’t create covid-19, so covid-19 didn’t create the capitalist crisis, but it has made it a whole lot worse.

The measures governments have been forced to take to prevent economic and social collapse means the money miners are going to be digging deep for some time to come. The aim must be to restore production as quickly as possible by easing the lockdown and directing spending towards increasing profitability.

Capitalism demands the primary defence of national capital at the expense of the working class. If capital sees only declining, or vanishing, profitability production will be limited or it will cease. The ruthless logic is that the most effective fiscal policy is to supply money to the wealthy, no matter how loudly reformists bleat.

Every time capitalism stands on the ledge, it takes huge infusions of money to entice back inside, money raised at the expense of the satisfaction of human need. Health and social care, pensions, rising standards of living, the whole social wage is regarded as a drain on profitability, to be restricted and reduced.

How does the working class respond? During the pandemic largely magnificently. Many have literally given their lives to bring medical care to those afflicted with the virus. The penny-pinching lack of PPE has had dire consequences. To see the prime minister, and others of the complicit cabinet, standing behind a lectern declaring, ‘Defend the NHS’ has stretched irony beyond satire. It seems such a defence doesn’t entail trying to keep them alive.

Unlike the volunteer workforce that toiled to supply what the government has not, face masks, scrubs and scrubs bags, vital for health and care workers. The tired canard set against socialism is that people are selfish, greedy even and certainly won’t work without the lash of the money whip. Except, in large numbers, they have.

Capitalism provides precious few opportunities for demonstrations of social solidarity, but covid-19 has. The dedication of health and care workers, way beyond their contractual obligations, has been inspiring. As have the efforts of shop workers, delivery drivers et al. While government has fallen disastrously short of fulfilling its responsibilities, people, without requiring direction or material incentives, have stepped forward.

Workers now need to assess what best serves their futures. Brief applause on a Thursday evening was a sign of social solidarity, but also served as a shield that government wielded to fend off scrutiny. How long will ministerial lauding of the NHS last once austerity resumes its principle role?

The treatment of teachers serves as an example. They were praised for remaining at their posts for vulnerable children and to free up essential workers (what percentage of the workforce is deemed non-essential one wonders?), risking their own health in the process. Now they are being portrayed as a self-interested impediment to opening the schools again. Nurses, take note.

There is much talk of how, as lockdown is rescinded, there will be a new normal. A green future perhaps. A benign state, having demonstrated its willingness to intervene economically and socially, may play a positive, ‘socialist-ish’ role to some. Labour and Conservative parties will vie to portray themselves in this guise, the Greens will perhaps promote schemes such as the basic social income. Then capitalist reality will impose itself.

The phrase ‘logic of capitalism’ has been used above. However, there is also capitalist cognitive dissonance. A government that will gamble on leaving the EU without any trade agreements as if nothing has actually changed since the pointless referendum of 2016 seemingly fixed things for all time.

Schemes such as basic income may have an appeal, but it can only be paid for ultimately by drawing money from the total value created for capitalism. Wages, taxes and profit all originate from this source: higher wages, lower profit. Add in the basic income, along with the cost of its administration, and profits must be affected.

Of course, value is created by the working class, so, by whatever means, they are only receiving in part what is actually theirs. Except capitalism does not exist to return to its workers the value they create, only that part they need to live, and work. Right-wing politicians know and accept this, left wing ones either pretend they don’t know this, or delude themselves (and, unfortunately at the present, most of the working class) that it can be otherwise without fundamentally changing society.

Covid-19 has caused a pause for reflection. Politicians have been found wanting, but ultimately the responsibility for their failures rests with all who keep voting for them. The bottom of the money mine is being scraped at the moment, and the ore brought to the surface turns out to be pyrites.

The huge majority, collectively the working class in all its wide variety of roles and manifestations, has the intellectual and creative resources at its disposal to transform the world. There will be future pandemics, but with democratically owned production to satisfy need not profit, a moneyless society to which people freely contribute their talents and abilities, such eventualities may be prepared for and attenuate.

Socialism cannot abolish disease, but it can mitigate its effects without having to be 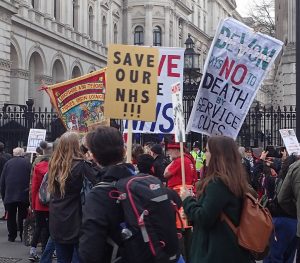 concerned about profits and share prices. Then, and only then, will we all be in it together.

Stood at the kerb of capital,

Striving not to be misled,

Do not look to the left or right,

Keep your vision straight ahead.