In 1920 a Coalition government was in office under Lloyd George between the Tories and the Liberals who supported ‘Liar George’ and the ‘Welsh wizard’ as even the Socialist Standard called him. Labour was the official opposition. Their leader was a now obscure Scottish trade unionist, William Adamson, who was described as ‘the Leader of the Lib-Labs in his comic-opera role as leader of the Opposition’ (March). Also in opposition were those Liberals who remained loyal to Asquith, the pre-war Liberal Prime Minister.

The Labour Party had reorganised itself in 1918 as a conventional political party which individuals could join. Many former Liberals were beginning to take up the offer. A review in June of a book on nationalisation quoted its author as saying that the Liberal Party was breaking up and that Liberals of the ‘strongly individualist type will go over to the Tories, the rest will form the right-wing of the Labour Party’. A columnist the previous month had already asked: ‘Why this sudden conversion to the ranks of Labour? Why this new-found interest on the part of Sir Leo [Money], Lord Haldane, and others of their kind in the ability of Labour to govern?’, answering ‘Methinks the wind has shifted slightly and sails are being trimmed accordingly.’ This was a shrewd observation. It was also a shrewd move on the part of the former Liberals, as Labour did come to replace the Liberal Party as Tweedledee to the Tories’ Tweedledum and provide better career opportunities for career politicians.

On nationalisation itself, the review wrote that ‘nationalised industries competing with each other on a world market and paying interest to a class of idlers is merely a modified form of capitalism,’ concluding ‘the absurdity of working-class action for Nationalisation is apparent … the supreme objection remains: the wages system is to be retained’.

The Communist Party had not yet been formed, but there were groups and individuals who supported the Bolsheviks. Some of them denounced the Labour Party in the same sort of terms as the Socialist Standard did, as ‘labour fakirs’, ‘misleaders’ and ‘capitalist agents’. They were in for a shock. At the 2nd Congress of the Communist International in Moscow in July, the Bolshevik leaders, realising that the anticipated revolution in Western European was not going to come to their aid, changed tack and called for their followers to form a ‘united front’ with parties like Labour. An article in August, headed ‘The Super-Opportunists’, analysed:

‘Now that it is plain that the workers do not understand Socialism and fight for it, Lenin is pandering to the ignorance of the world’s workers. In defence he says that by supporting the pro-capitalist Labour Party and helping to establish a Labour Party government, the workers will learn the uselessness of Labour parties’.

The author commented that ‘if that policy is to be adopted, then it is necessary for the workers to follow every false road … Such nonsense as supporting parties and Governments to gain power to learn their misdeeds is not the way to socialism.’ Such nonsense, however, persisted for the next hundred years and is still heard today.

Earlier that year, a speech that Lenin had made in 1918 had been translated into English as a pamphlet. In it, Lenin had declared that ‘reality says that State capitalism would be a step forward for us; if we were able to bring about State capitalism in a short time it would be a victory for us’. The July issue commented: ‘That Socialism can only be reached through State capitalism is not true’ and that it was only being adopted in Russia ‘because the Bolshevik government find their theories of doing without capitalist development unworkable – hence they are forced to retreat along the capitalist road’.

There were clashes in the letters column with defenders of the Bolsheviks over whether or not Marx had said that the state could not be taken over but had to be smashed, or held that a socialist revolution could not happen in an economically backward country, or whether he stood for democracy or dictatorship in the literal sense – arguments that have gone on ever since, but which were set out for the first time in this period.

The Socialist Standard was more opposed to the Bolsheviks’ supporters in Britain, with their demands to set up ‘soviets’ and their claim that socialism was being established in Russia, than to the Bolsheviks themselves. The Bolsheviks were of course denounced for ignoring Marx’s views and for being a minority dictatorship, but their working class and even socialist credentials were not challenged. Another article in the same issue said that ‘in the special conditions and chaos caused by the war’, a ‘resolute minority’ was able to seize power in Russia despite a majority of workers there not understanding or wanting socialism. They could not establish socialism, but:

‘The new ruling minority promised peace and – to their highest credit – established it’. Despite ‘the appalling chaos in which they found Russia, they have … done wonders in the way of reconstruction and reorganisation.’

Reading between the lines, Socialist Party members of the time expected the Bolshevik regime to be overthrown. The concluding paragraph of the article certainly reads like the sort of obituary Marx had written after the suppression of the Paris Commune in 1871 – only fifty years previously. When the real socialist movement takes off, it said, ‘the rule of the Russian Bolsheviks will be a splendid lesson, not on the value of “Soviet” or “Dictatorship,” but on the ability of the working class to manage its own affairs’. 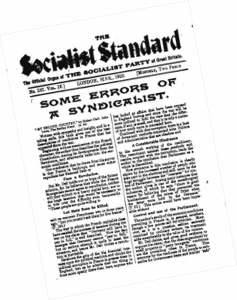 We wouldn’t say this today (and didn’t by 1929), partly because we wouldn’t need to, but in 1920 there had never been a government made up of workers let alone of people who claimed to be socialists. There had not yet been a Labour government in Britain. Governments everywhere were managed by capitalists or by politicians who looked, dressed and spoke like them. So, the point needed to be made that workers were capable of running society. Not that the aim was to establish a working class government. An article in February on ‘Government by Labour’ distinguished between ‘administration’ and ‘government’: ‘the first serves the people and the other represses them.’ The article concluded that, once the workers had made the means of production the common property of the whole of society, they would ‘proceed to administer them for the common welfare of all’. ‘Then’, it added, ‘the need for the State, for government – ‘Labour’ or otherwise – and the “keeping in due subjection” will vanish, and mankind will at last be free’.

The main problem facing workers at the time was growing unemployment, which was 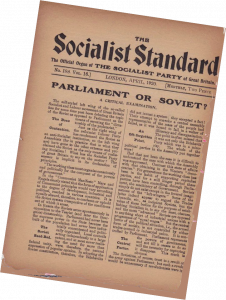 attributed to overproduction (and, sometimes, to underconsumption). Labour and trade union leaders were bitterly denounced for telling the workers to work harder and produce more and for going along with the capitalist argument that waste should be eliminated (if the capitalist class wasted some of its surplus value that wasn’t bad, it was argued, as this meant work for workers). But the real bitterness was reserved for the capitalist class who were denounced as arrogant, callous and useless parasites living off the backs of the workers and causing them to suffer. It wasn’t just class antagonism that was expressed but class hatred.

All the articles from the Socialist Standard for the year 1920 are now online at https://www.worldsocialism.org/spgb/standard-index-1920s/