The LTV: A Bad Criticism of Marx’s Labour Theory of Value 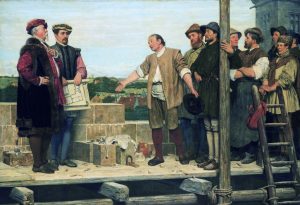 Value: Bad Science and Bad for Ecological Socialism’, David Pena launches a stinging attack on the Marxian theory of value and outlines an alternative theory which he evidently considers more appropriate to an age of heightened environmental concern (tinyurl.com/tbgjo92).

Pena is not exactly breaking new ground, though. The intellectual origins of some of his ideas can be traced back to writers such as Sergei Podolinsky, in the 1880s, a pioneer in the field of ‘energetics’, who tried to reconcile Marx’s labour theory of value with the laws of thermodynamics.

Classical economists like Adam Smith and David Ricardo maintained that a commodity’s value depended on how much labour went into making it. This argument was taken up and refined by Marx. It is important to understand that Marx’s theory does not equate ‘value’ with the actual amount of labour it took to produce a good – ‘concrete labour’. If that were case there would never be any incentive to introduce labour-displacing technology since this would mean less value being produced. Rather the metric of value is ‘abstract labour’ – the socially necessary labour time it takes to produce a good, from start to finish, under average industry-wide conditions.

‘Socially necessary labour time’ is not something you can measure with a stop watch – like concrete labour. Moreover, it can only express itself through market exchange. As Marx explained: ‘Social labour-time exists in these commodities in a latent state, so to speak, and becomes evident only in the course of their exchange. Universal social labour is consequently not a ready-made prerequisite but an emerging result’.(A Contribution to the Critique of Political Economy, Lawrence & Wishart, Ch. 1, p. 45). Meaning the value of a product can change even after it has been produced as a result of ongoing technological and other changes.

Pena begins by identifying what he believes is a basic flaw in Marx’s theory:

‘“Abstract human labor,” according to Marx, is the “value forming substance” that is “materialized” in commodities. … But how can an immaterial element (an abstraction) become materialized and take up residence in a physical commodity (like the word becoming flesh)? What a confusion of categories!’

This is making rather heavy weather over what is, after all, just a metaphor. That Marx saw value as something immaterial is quite true (even if he used a ‘material’ metaphor like ‘substance’). As he put it ‘the value of commodities is the very opposite of the coarse materiality of their substance, not an atom of matter enters into its composition’ (Capital Vol 1, Ch.1). Value here is a construct in the same way as the statement, ‘the national average for children per family unit is 1.8’, is a construct. As far as we know there is no actual ‘material’ family unit consisting of 1.8 children.

For Pena, however, this smacks of a contradiction. How can something as immaterial and abstract as value become ‘congealed’ in (and thus, according to him, be transformed into) a material substance? Labour is a process not a substance. Consequently:

‘Despite all the talk about Marx’s materialism, his theory is obviously based on an immaterialist metaphysics, which holds that all commodities share a common non-material property that gives them exchange value. Marx is not a materialist after all, at least not when it comes to exchange value’

For Marx’s theory to be ‘scientific’, claims Pena, it needs to identify ‘an empirically detectable and measurable property that gives value to commodities, and a theory that is consistent with fundamental propositions of other relevant sciences, such as physics and chemistry’. But since abstract labour is not something physical and therefore not empirically detectable and measurable, it follows that Marx’s theory cannot be materialist or scientific.

Oddly enough, until recently there was no empirical evidence for the existence of black holes in outer space. Were the astrophysicists inferring the existence of such phenomena being ‘unscientific’ in doing so? The value of scientific theory lives in its predictive power and this is the basis on which Marx’s theory must be judged.

It is precisely the kind of naïve empiricism Pena espouses which focusses only on the outer appearance of phenomena that Marx criticised in his analysis of capital. Capital is not a thing but a social relationship. As he explained in Wage Labour and Capital (1847):

Pena is committing the same error as those who conflate these things. This can be extended to include also natural resources as in Schumacher’s comment that ‘Natural capital is the world’s stock of natural resources’ (Small is Beautiful, 1973). Inadvertently or otherwise this ‘has the effect of ‘naturalising’ capitalism, rendering its categories timeless and ahistorical.

Pena describes ‘value’ in much the same vein:

‘value in its original and grounding manifestation, the dual form of matter and energy, pre-exists human and all other life forms. The worker is an arranger and discoverer of values, but not a creator. Nature is the source of all values, not only use values, as Marx erroneously believed.’

So instead of commodities having in common the fact that they are products of human labour, their commensurability hinges on the fact that they all require energy to produce. As Pena puts it: ‘Rationally expended energy is the “common element” of all commodities. The amount of expenditure represented by the finished commodity is its objective exchange value.’

Pena thus wants to make ‘energy’ the fundamental metric of exchange value because it is physical and can be empirically measured (unlike the ‘metaphysical’ concept of abstract labour). However, exchange value presupposes and springs from commodity production and cannot really be understood outside of this context – which, unfortunately, is precisely what Pena wants to do.

We see this in his claim that value, ‘pre-exists human and all other life forms’ and has its source in nature. The perfect riposte to this is the rather colourful observation made by the nineteenth-century Ricardian economist John Ramsay McCulloch, as follows:

‘When a fish is caught, or a tree is felled, do the nereids or wood-nymphs make their appearance, and stipulate that the labour of nature in its production should be paid for before it is carried off and made use of? When the miner has dug his way down to the ore, does Plutus hinder its appropriation? Nature is not, as so many would have us to suppose, frugal and grudging. Her rude products, and her various capacities and powers, are all freely offered to man. She neither demands nor receives a return for her favours. Her services are of inestimable utility; but being granted freely and unconditionally, they are wholly destitute of value, and are consequently without the power of communicating that quality to any thing.’(The Principles of Political Economy, 1864)

Nature, along with human labour, is of course the source of all use values but, as McCulloch points out, makes no contribution whatsoever to the production of exchange values. The latter is a product of human society and even then, only a very particular and recent form of human society called capitalism in which alone the law of value applies.

It makes intuitive sense that abstract labour should be the basis of value under capitalism since this system sprang from alienation of the great majority from the means of producing wealth. The economic compulsion this imposes on them to sell their working abilities – or ‘labour power’ – to the capitalists in return for a wage with which they can buy their own means of subsistence is precisely what makes for the generalisation of commodity production and, hence, for the ‘value’ to come into play.

The worker under capitalism does not approach the capitalist offering a particular bundle of energy (measured in joules) in exchange for a wage. Rather, they offer a particular skill which the capitalist specifically requires. The application of their labour power in the process of labouring is what creates a greater value than the value of the wages they receives and is the source of that capitalist’s great wealth.

True, labour in any society (including societies without commodities or markets) involves the expenditure of energy but so too does leisure, love-making and tending to one’s allotment. But none of these latter activities necessarily entail commodity exchange and the production of exchange values.

Pena does not see this because he does not grasp that value is essentially a social relationship based on economic exchange. His physical reductionist approach to the whole subject also informs his absurd claim that Marx’s labour theory is ‘bad for ecological socialism’. Since the theory posits only labour as the source of value it overlooks and devalues, he supposes, the contribution of Mother Nature to our material wellbeing.

But this is to totally miss the point. Marx’s labour theory of value is an explanation of the modus operandi of a system socialists want to get rid of, not perpetuate. We want to bring about a society in which the exchange values no longer exist and use values are the sole consideration. It is the very existence of economic exchange that gets in the way of our fully appreciating, and acting upon, the latter and is incompatible with ‘ecological socialism’.

When Marx and Engels talked in the Communist Manifesto of the need to ‘increase the total of productive forces as rapidly as possible’ all they meant by this was that these needed to be developed to the point where human needs could be adequately met as a precondition of socialism itself. This was emphatically not a recipe for infinite growth, as Pena seems to think, or some Promethean desire for ‘production for its own sake’.

Unfortunately, by arguing for the retention of a system of economic exchange (and exchange values couched in units of energy), Pena himself is unwittingly helping to promote the very thing that increasingly imperils our global ecosystem about which he is (quite rightly) concerned.

2 Replies to “The LTV: A Bad Criticism of Marx’s Labour Theory of Value”