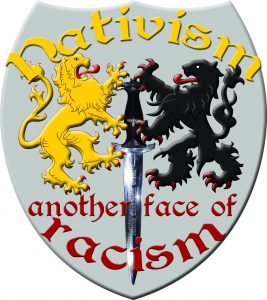 There are prominent politicians around the world who propagate a fallacious theory on immigration and, when extremists embrace such ideas, those politicians wash their hands of any culpability. The fear of immigrants is magnified by lies and language. Fear of migrants brings in votes for politicians. Politicians feed on the fear. Fear of migrants brings in viewers and readers for the media. Yet multiple studies have found that people who have direct contact with immigrants have much more positive views about their work ethic and supposed reliance on welfare, and are much more open to increased immigration.

There is a conspiracy theory pervading the far right. It is centered on the idea of white genocide with the belief that ‘Western, Christian’ culture is under siege by immigration from non-white countries, resulting in a replacement of white people via demographics, i. e, foreign-born out-breeding the native-born. This is despite numerous studies dismissing such paranoia. The Great Replacement Theory claims that a white Christian European population is being systematically replaced by non-European, non-white, Muslim immigrants. Renaud Camus, credited as the originator of this pernicious theory, cites Enoch Powell’s 1968 ‘rivers of blood’ speech as an influence on his thinking.

Hungary recently hosted an international summit on demography attended by delegations from dozens of countries. The fear of rising populations in other parts of the world was the dominant theme during the summit. Boosting native birthrates was a priority for the long-term development of their countries. Procreate or face extinction was the message concerning their shrinking population.

Hungary’s Prime Minister, Viktor Orbán, said it was conceivable that his country, due to low birthrates and emigration of Hungarians to EU states further west, could simply disappear, explaining to the conference: ‘If Europe is not going to be populated by Europeans in the future and we take this as given, then we are speaking about an exchange of populations, to replace the population of Europeans with others. There are political forces in Europe who want a replacement of population for ideological or other reasons’.

His minister for family, youth and international affairs, Katalin Novák, said ‘Europe has become the continent of the empty crib whereas in Asia and Africa they face demographic challenges of the opposite type.’ The Hungarian government doubled family spending between 2010 and 2019, with the goal of achieving ‘a lasting turn in demographic processes by 2030”’. Fertility rates have gone up from 1.2 to 1.5 children per woman, according to government figures. This is still far from the 2.1 figure the UN says is the number required for a sustainable population. This year the Hungarian government introduced a 10m forint (£27,000) interest-free loan for families, which does not have to be paid back if the couple has three children.

The El Paso shooter said in his text, ‘This attack is a response to the Hispanic invasion of Texas. They are the instigators, not me. I am simply defending my country from cultural and ethnic replacement brought on by an invasion’.

In the Pittsburgh synagogue massacre, the shooter’s social media posts revealed he was punishing Jews for, as he saw it, inducing the death of whiteness by orchestrating immigration.

Six weeks later another shooter murdered a woman and wounded several more at a synagogue in Poway, California, leaving a manifesto that blamed Jews for ‘funding politicians and organisations who use mass immigration to displace the European race’.

In the USA, Fox News airs reports about Hispanic immigration at the Mexican border in terms of ‘invasion’ or as Fox TV host Laura Ingraham put it, ‘replacing the current American population, or swamping the current American population, with a new population of people.’ In the UK, that media demagogue Katie Hopkins expresses much the same sentiments. ‘Do you think that happened by chance or by design to keep the London mayor in Muslim hands. Our capital city, our capital city, your capital city is run by a Muslim mayor who has a Muslim police association, a Muslim housing association’.

This view is also reflected by Spectator associate editor, Douglas Murray, who claims that ‘Europe is committing suicide’ by allowing Muslim immigration. He warns of ‘white Britons’ becoming a minority in ‘their own capital city’ and claims London has become a ‘foreign country’ because of so many black, Asian and mixed-race Brits – no matter if they’re born there – living there, arguing: ‘London is now less than 50 per cent white British. It is not healthy for the native population to be a minority in their own capital’.

Racism and nationalism exists because capitalism produces endemic problems in employment, housing, and welfare. The working class suffer the misery of these problems but they do not understand their cause. They are, therefore, ready to be persuaded to blame the problems onto scapegoats, whether immigrants or any other minority that can be readily identifiable. Racism and nationalism are issues which working people must deal with as an obstacle to their progress to a sane social system.

Socialists sympathise with the suffering of our fellow-workers of whichever ethnicity and we ask them all to set aside their nationalism, their religious bigotry, their ethnic hatred and racism and to join together to put an end to the real problem – capitalism. The Socialist Party appeals to our fellow workers to unite, irrespective of nationality or colour, to defeat racism and nationalism. We are opposed to all restrictions on the free expression of ideas and do not support suppression of opinion, no matter how false or distasteful we believe that opinion to be. In our view, the way to counter irrational racist conspiracy theories is in the open unfettered discussion.