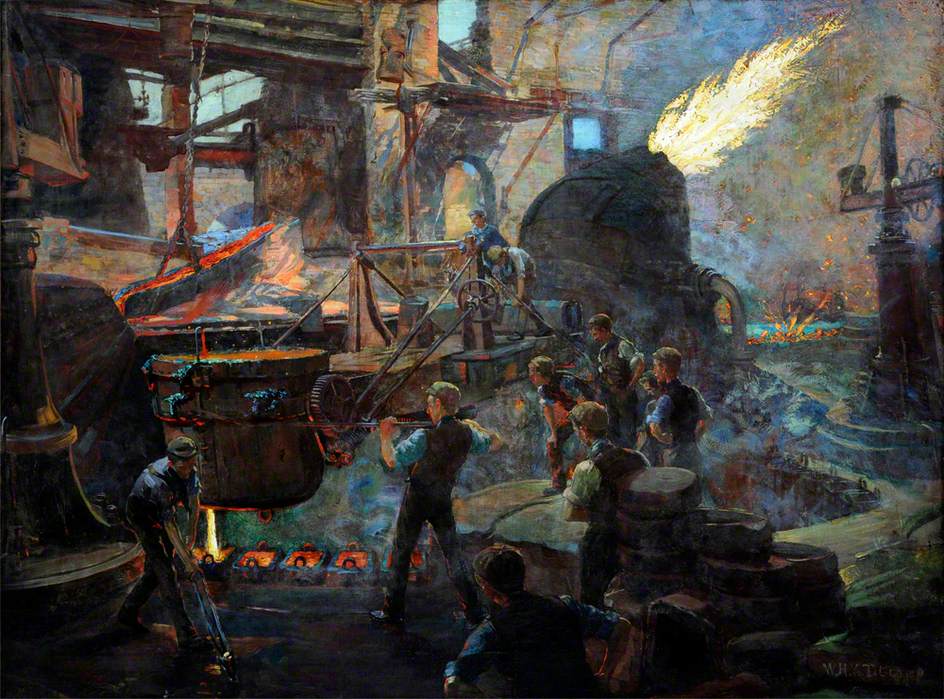 The Kelham Island Museum in Sheffield displays the industrial history of Sheffield, once known as the ‘Steel City.’

The painting The Wealth of England: The Bessemer Process of Making Steel (1895) by William Holt Yates Titcomb is on display to complement the impressive Bessemer Steel Converter (iron into steel), by Henry Bessemer which was licensed to Brown and Cammell, Sheffield steel makers in 1858. The Bessemer process involved the converter tilting down to pour molten pig iron in through the top, then swung back to a vertical position and a blast of air was blown through the base of the converter, flames and fountains shot out of the top of the converter, the converter was tilted again and the newly made steel was poured out. The first converters could make seven tons of steel in half an hour. The Bessemer steel was used for railways, ships, and bridges. This Bessemer Converter is one of only three converters left in the world. It was used by the British Steel Corporation in Workington until 1974 and produced the last Bessemer Steel made in Britain.

The 1851 Great Exhibition at the Crystal Palace in Hyde Park showcased Britain as the ‘workshop of the world’, and the triumph of capitalism. At the Great Exhibition, 158 Sheffield companies displayed their wares. Annual steel production grew from 49,000 tons in 1850 to 5 million tons in 1900. The alloy was given pride of place at the Crystal Palace, in the shape of an ingot of Sheffield steel, weighing over a ton.

The most impressive exhibit in the Museum is the River Don Engine, built in 1905, which worked in Sheffield until 1978, first at Cammell’s mill then the British Steel Corporation River Don plant. This 12,000 horsepower engine powered a huge rolling mill, made armour plate for the first Dreadnought battleships, and rolled steel reactor shields for nuclear power stations towards the end of its working life. It is the most powerful surviving steam engine in Britain. The Bessemer Converter and the River Don Engine are testament to the Marx and Engels observation that ‘the bourgeoisie cannot exist without constantly revolutionising the instruments of production… it has been the first to show what man’s activity can bring about. It has accomplished wonders far surpassing Egyptian pyramids, Roman aqueducts, and Gothic cathedrals’ (Manifesto of the Communist Party).

The main occupation of working class women in South Yorkshire was in segregated areas doing tedious, monotonous, dirty and dangerous jobs such as feeding spoon blanks through rollers at Mappin and Webb’s steel works. In 1911 4.8 million women were working in industry in South Yorkshire, and by 1931 this had risen to 5.6 million. Working class women have always had to work in capitalism. ‘Buffing’ was a main occupation for women in the steel industry. Mary Dyson was a ‘buffer girl’ in the 1930s, and later in 1971 as Lady Mayoress of Sheffield, she visited her old workplace, Viners Ltd. She was asked ‘Did you enjoy working for us?’ and replied  ‘No! The work was too hard and you didn’t pay us enough!’

Sheffield, as a working class Labour city, was fully behind the Labour Party’s ‘Nationalisation’ Clause IV ‘to secure for the workers by hand or by brain the full fruits of their industry.’  The Labour Government’s 1949 Iron and Steel Act established the Iron and Steel Corporation of Great Britain which was effective in February 1951; the Corporation becoming the sole shareholder in 80 principal iron and steel companies. After 1952 it was returned to the private sector by the Tory Government. With Harold Wilson’s 1963 speech on ‘the Britain that is going to be forged in the White Heat of Technology’ and the election in 1964 of a Labour Government, Sheffield steel workers looked forward to ‘nationalisation’. The 1967 Iron and Steel Act established the British Steel Corporation which comprised 90 percent of the UK’s steel making capacity, employing 268,500 workers, one of the world’s largest steel making organisations.

Nationalisation promised the workers that industry would be ‘managed on behalf of the people’ but it was state capitalism, the wages system under new management. There was no industrial democracy or workers’ self-management. British Steel was a public corporation to manage the industry on a commercial basis, as a profit-seeking business, not as a public service.

With changing market conditions, ‘the anarchy of production’ (Engels Anti-Duhring) in capitalism makes nonsense of all attempts to plan production, and nationalised industries have to earn a return on capital while competing in the market place. With crisis and recession in capitalism after 1973, and the election of Thatcher in 1979 capitalist re-structuring and de-industrialisation began which involved the closure of steel works, loss of steel jobs, and a rapid contraction of the steel industry. A national steel strike called by the British Iron and Steel Trades Confederation lasted 13 weeks from January to April 1980 but did not halt de-industrialisation. Between 1979-82, 20,000 steel jobs were lost in Sheffield and eventually the British Steel Corporation was ‘privatised’ in 1988.