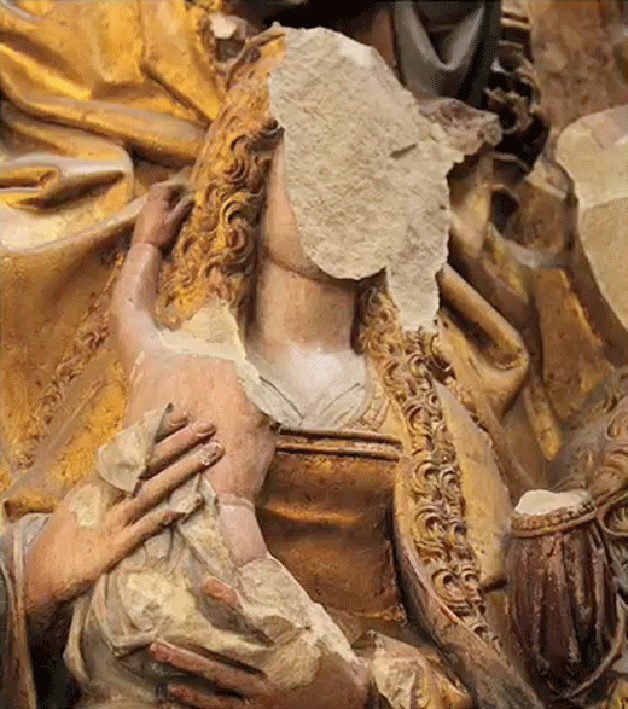 Humanity has always been in danger of being seduced by the creations of its imagination. The gods and monsters that have haunted us still wield enormous power over many. The symbols and images that represent these creations are considered sacred and ‘iconic’ by millions throughout the world. In a sadly familiar ontology the symbols become the very incarnation of what they represent. Representations of gods, saints and prophets, in the original iconic meaning, share some of the power that is presumed to be owned by what is represented. A nation’s flag is thought, by many, to be a symbol of who and what they are. It is this political identification rather than being derived from any supernatural or innate cultural superiority, that is at the heart of iconographic power. An individual’s desire to identify with his family, clan, tribe or nation is an essentially social instinct which, due to any given cultural context, is directed at those whom they love and respect; or more problematically, those whom they fear. Authoritarian cultures thrive on the need of the isolated and alienated individual to identify with the powerful – even if, or possibly because, this power derives from the exploitation and subjugation of that individual.

When a group identifies with a symbol of political power, which in capitalism invariably implies a militaristic power, it is the climax of sometimes decades or even centuries of propaganda and can generate immense irrational emotional destructive energy. Historically it has been partly the manipulation of this negative energy that has made wars possible. It is, then, vitally important to challenge these pervasive icons and the irrational political narratives that they represent. But when indulging in such iconoclasm are we in danger of alienating those with whom we seek to communicate? And, in the light of recent murderous violence, are we willing to put ourselves in danger by doing so?

Although somewhat devalued by journalistic overkill it is still possible to identify something ‘iconic’ in the results of nearly every human endeavour. In the arts, architecture, technology, science etc there arises a consensus that recognises a cultural/historic significance to something, or indeed, someone who or which is created as a result. Sometimes these are intentional (propaganda) or unintentional (cult status) but all, at least for a time, capture the zeitgeist of a cultural moment. It doesn’t have to be of a contemporary nature as, for example, artists from the past can be ‘rediscovered’.

The political significance is always present but varies in its importance. The twin towers of the World Trade Centre in New York were once icons of the US dominance of the global economic system but are now, as a result of the success of that iconic status, monuments to the terrifyingly potential murderous focus they presented to America’s enemies. ‘A building is a symbol, as is the act of destroying it. Symbols are given power by people. Alone, a symbol is meaningless, but with enough people, blowing up a building can change the world’. Some may recognise that quote from the film ‘V for Vendetta’. In that narrative the Houses of Parliament were destroyed without the killing of anyone within, which renders the act one of pure iconoclasm in contrast to 9/11 where those who died (the victims not the perpetrators) were transformed into martyrs. It may well have ’changed the world’ but not, most would argue, for the better. The original ’gunpowder plot’ which ’V’ seeks to recreate was, of course, just as murderous in its intent as was 9/11. But does iconoclasm have to be violent and destructive? Can the political deconstruction of an icon be ideologically constructive? In its reformulation perhaps the underlying meaning and source of its power can be revealed, thus exposing the irrational nature of political symbolism?

It is sometimes said that ‘a picture is worth a thousand words’ and an icon is testament to the power of the image. Undoubtedly any deconstruction of such images will anger and alienate some people but others might well be inspired by the unflinching moral and political analysis that can motivate such iconoclasm. Socialists seek to do just this, we do not destroy images but we hope to render them impotent through their subversion. We will never flinch from exposing wickedness, especially when it’s draped in a flag or motivated by religious symbols of intolerance. But what of socialist iconography?

The Socialist Party has never been attached to symbolism; the stars and hammers and sickles of the Leftist totalitarian states have increased our distaste for such icons of ideological/nationalistic power. We do perhaps have a slightly romantic regard for the red flag and its historical association with the Paris Commune and the blood  shed in the class struggle by the workers during and since that time. If anyone was to subject it to contempt and iconoclasm a socialist’s response would typically be analytical in terms of the ideas represented by this essay rather than by any emotional distress; something that continues to perplex and frustrate our opponents. We continue to use the ’iconic’ images of Karl Marx in our publicity but this is mainly because those images gained their fame from their usage by his opponents (the left & right) independently of our use of them; it is his ideas, not his image that inspires us.

Someone once asked me, only half jokingly and because of my militant atheism, if I would be ready to swear an oath on a copy of Das Kapital instead of the bible. The idea struck me as amusing, as I’m sure it would have done to its writer, because at the very heart of that work is the essential need to subject everything you think you know and believe to a constant process of critique – a rather different approach than the one recommended by the contents of the Bible!

Anyone who doubts the continued irrational power of iconography only has to witness the candidates in the upcoming election draping themselves in the Union flag. This is the symbol of capitalist power and political ignorance in the UK; anyone kissing its hem to gain votes is either a hypocrite or a fool. Some years ago I was asked, in my capacity as a graphic designer, to design a symbol for the Socialist Party. Having produced many logos in the past I was surprised how difficult I found this commission. I realise now, in the light of this analysis, why I found it so difficult – in some ways socialism needs no symbols, just as it needs no leaders. Consciousness of the world as it really is makes transparent the once opaqueness of capitalist ideology and its symbols.

Socialism does not depend on marketing or advertising, because, like the revolution itself, it depends on the individuals’ struggle with their own cultural and political conditioning – we can only provide a catalyst for the human need for involvement in the community. We may use the globe as a universal symbol to distance ourselves from the prosaic and insular icons of our opponents, but only as a signpost for the individual to aid their personal struggle and then the inevitable involvement in the class struggle itself. Would we like to destroy the buildings of ’the mother of parliaments’ as in the climax of the film mentioned above? Perhaps we could preserve it as the museum it really is, where the mannequins (MPs) are replaced by waxworks. These will then serve much more purpose as icons of the past. A past, of course, where they were slavish puppets of their capitalist masters.