Mixed Media: William Morris and His Legacy – Anarchy and Beauty

The William Morris exhibition at the National Portrait Gallery in London was curated by Fiona McCarthy, author of William Morris: A Life for Our Time where she describes Morris’s politics as ‘Marxism with visionary libertarianism.’ 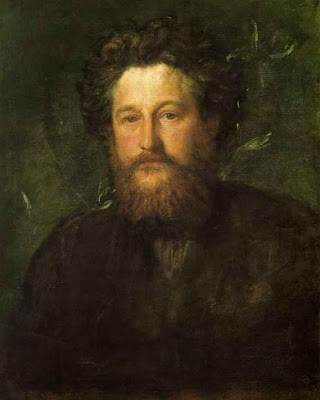 For socialists, the exhibition contains a cornucopia of delights, and fleshes out what WB Yeats wrote in The Trembling of the Veil: ‘I cannot remember who first brought me to the old stable beside Kelmscott House, William Morris’s house at Hammersmith, and to the debates held there upon Sunday evenings, by the Socialist League. I was soon of the little group who had supper with Morris afterwards. I met at these suppers very constantly Walter Crane, Emery Walker, in association with Cobden-Sanderson, the printer of many fine books, and less constantly Bernard Shaw, and perhaps once or twice Hyndman the socialist and the anarchist Prince Kropotkin. There, too, one always met certain more or less educated workmen, rough of speech and manner, with a conviction to meet every turn.’

The portrait William Morris by GF Watts gives Morris a Dionysian quality, of which Yeatswrote ‘a reproduction of his portrait by Watts hangs over my mantelpiece… its grave wide-open eyes, like the eyes of some dreaming beast… while the broad vigorous body suggests a mind that has no need of the intellect to remain sane.’ When Morris lay dying one of his doctors diagnosed his fatal illness as ‘simply being William Morris, and having done more work than most ten men.’

Of special interest is the Gold tooled binding of William Morris’s copy of Marx’s Le Capital. Morris started to read Marx in 1883 and by 1884 ‘the book ‘had been worn to loose sections by his own constant study of it’ and had to be rebound. It is always a pleasure to see the Hammersmith Socialist Society red banner which dates from Morris’s departure from the Socialist League to form the Hammersmith Socialist Society in 1890.

Roger Fry’s Edward Carpenter is a portrait of the gay socialist who was a comrade of Morris in the SDF, and later joined Morris, Eleanor Marx and Edward Aveling in the Socialist League. Carpenter advocated free love, women’s emancipation, and linked gay emancipation with social transformation. Carpenter lived openly with a working class lover near Sheffield for 30 years.

The oil painting of anarchist communist Prince Peter Kropotkin by Nellie Heath was commissioned by the Royal Geographical Society in recognition of Kropotkin’s scientific achievements. Oscar Wilde described Kropotkin as ‘a man with a soul of that beautiful white Christ’ (De Profundis).Significantly for socialists, Kropotkin concluded in The Wages System: ‘a society that has seized upon all social wealth, and has plainly announced that all have a right to this wealth, whatever may be the part they have taken in creating it in the past, will be obliged to give up all ideas of wages, either in money or in labour notes.’

Bernard Partridge’s portrait of Bernard Shaw reminds us that Lenin was right when he described Shaw as ‘a good man fallen among Fabians’ (Six Weeks in Russia, Arthur Ransome). Shaw was on the point of joining the Marxist SDF but instead joined the Fabian Society. Shaw’s The Intelligent Woman’s Guide to Socialism and Capitalism was republished in 1937 and Hardy in the Socialist Standard wrote that Shaw’s views were ‘essentially utopian – that there will be money incomes under socialism, and that the capitalist foundation can be made to support a socialist system of society.’

The iconic Gilman photograph gelatin silver print of Oscar Wilde and Lord Alfred Douglas is featured in the exhibition. Unlike Shaw, Wilde understood socialism, and under the influence of Kropotkin he wrote in The Soul of Man Under Socialism ‘with the abolition of private property, then, we shall have true, beautiful, healthy Individualism. Nobody will waste his life in accumulating things, and the symbols for things. One will live.’

Socialist women comrades of Morris are featured in the exhibition such as the pencil drawing of Eleanor Marx by Grace Black. In The Woman Question Eleanor Marx and Edward Aveling identified that ‘the position of woman rests on an economic basis’ with ‘no solution in the present condition of society’ but in socialism ‘the woman will no longer be the man’s slave but his equal.’ The carbon print of Annie Besant by Herbert Rose Barrand portrays the author of the 1888 article White Slavery in London whichdescribed conditions of work in the Bryant & May match factory in London’s East End and led to the successful London Match Girls strike.

William Morris and His Legacy: Anarchy and Beauty is to be recommended if only to give modern audiences an introduction to socialist ideas. As Morris wrote ‘Our business… is the making of Socialists, i.e. convincing people that Socialism is good for them and is possible. When we have enough people of that way of thinking, they will find out what action is necessary for putting their principles in practice. Therefore, I say, make Socialists. We Socialists can do nothing else that is useful’ (Commonweal 15 November 1890).