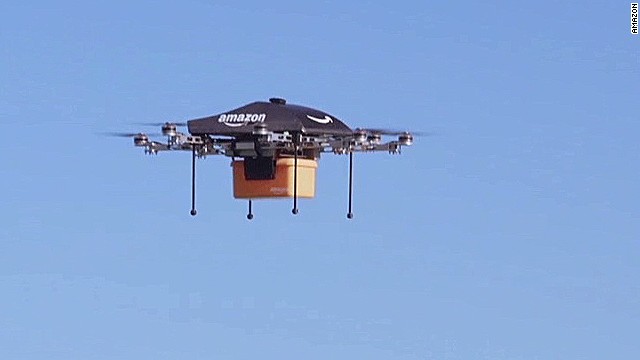 The announcement in December that Amazon planned to start delivering goods by helicopter microdrones prompted a flurry of media excitement prematurely extinguished by the two-faced hagiographic orgy following Nelson Mandela’s demise shortly afterwards. But still the story buzzed round the pubs and offices like whirring rotor blades. What if someone nicks your delivery after the drone has dropped it off? What if someone shoots it down with an air rifle or radio pulse? What if there’s a mid-air collision? What happens to all the plastic delivery boxes afterwards? And what of civil aviation control systems? Will all these drones flock in droves to Trafalgar Square looking for someone to feed them?

Some po-faced commentators were quick to identify the story as a piece of misdirection from a company already under fire for its working practices, including poor pay, punishing targets and round the clock surveillance, but this was merely journalistic contrariness.  Amazon can scarcely be worried given that such bad publicity is old and dog-eared news (see for instance ‘UK workforce attacks Amazon’, Guardian, 14 April 2001). Besides, shock revelations about Foxconn workers jumping in desperation off factory rooftops in China have not raised an eyebrow among Apple’s loyal devotees in the west, and Nike and Primark shoppers don’t pause for guilty reflection either, so why should Amazon lose sleep?

The risk that these drones would be hacked went from likelihood to certainty after news that another drone had suffered a similar fate (‘Parrot drones ‘vulnerable to flying hack attack’’, BBC Online, 4 December). We therefore await with baited breath a near future when Black Friday Christmas online shopping extravaganzas are followed by a mass exodus of all UK deliveries to a single offshore pirate tanker registered in Liberia, or else combined into a festive Stuka dive-bombing raid on Westminster.

And what will these little Santas in their micro-sleighs be carrying to your back door in years to come? The answer is ‘wearables’. Not socks or pants, you understand, or at least not in the form you know them, but electronic wearables that ‘do’ things. Several companies are engaged in a high-street battle to corner the smart watch market, but this must surely be a minor skirmish compared to the battle for the smart bra, the smart wig and the mood sweater. The bra will tell you what mood you’re in, the mood sweater will tell everyone else (by lighting up in different colours), and the wig will allegedly let you see in the dark with bat-vision and control computers telepathically. With your Google glasses to complete the look you will be at the electronic leading edge of every fancy dress competition going. Just don’t go out in the rain.

Sound ridiculous? Well, it is. But that’s the future for you. Or at least it’s the future as projected by company sales executives on fire with the possibilities of technology to give an already overstuffed population more of what it’s already got.

There are worrying developments in amongst all this that you have to watch out for. Computer viruses are getting cleverer, and now passing themselves off as free virus-checkers. Spammers are overcoming their bad English and sending phishing emails, supposedly from your bank, that are starting to look convincing. Now the game is ‘ransomware’, a stroke of genius whereby the spammers don’t have to be sly, they can just barge right in, lock up your whole computer and then charge you a fortune in untraceable bitcoins before vanishing into the night – without bothering to release your data. Cue a new term and possibly criminal charge of – ‘dataknapping’. Remember, you read it here first.

But despite the concerns, is the future in capitalism any scarier because of this technology than it would otherwise be? Futurologists like Alvin and Heidi Toffler have made careers since the 1960s out of claiming so. Their influential notion of ‘future-shock’ has just been revisited by Douglas Rushkoff of Cyberia (1994) fame in his latest book Present Shock (2013), the idea being that the future is no longer the future but is smacking us in the face like a wet herring in today’s present. Interesting though these ideas are, socialists tend to take such things with a spoon of salt. For one thing, futurologists like the Tofflers and Ray Kurszweil (long-time predictor of the history-shattering Singularity) tend to overlook class relations as a social dynamic and motor of change. Even Rushkoff, politically more clued-up than them, is in danger of being dazzled by his own hype, coining terms like ‘fractalnoia’ (the construction of arbitrary patterns out of masses of data, leading to conspiracy theories) and ‘digiphrenia’ (the ability to be in multiple places and cyber personalities at once) as if these were fundamentally new human behavioural phenomena. In fact, everyone operates multiple personalities, at home, at work, on the phone, at job interviews, in the pub, and humans are forever building baroque theories out of bare bone facts. The underlying tendencies have always been there, so there’s no reason to get too excited about new manifestations of them.

Socialists are futurologists too, because socialism is a theory of the future, but we live in the present and our feet are on the ground, where workers actually live. The offices may buzz today with the latest talk of drone deliveries as if it was science-fiction come to life, but tomorrow people will be ordering by drone without a second thought. Workers don’t trip over the future and suffer some existential crisis, they simply lengthen their stride. Indeed, the main proof against the futurologist notion of future-shock is the futurologists warning us about it. Forewarned, we forestall any sense of surprise.

Besides, if you look around you and then compare it to any cinema film from the 1960s and 70s, when futurologists were first writing about brave new worlds of the year 2000, what do you see? You see pretty much the same clothes and hair, the same houses, buses, cars and trains. You see the same food, the same language, the same social mannerisms. About the only difference is that the TV cops back then didn’t have computers on their desks and they had to call the station from call-boxes. Oh, and they all smoked like chimneys.

That’s not to say the world hasn’t changed, or that technology has not been instrumental in the changes, but the real differences lie underneath the gadgets, in social attitudes. Far from being paralysed by the blinding speed of change, we are learning to change ideas at blinding speed. Social relationships have been revolutionised, at least in some ways, offering an instant intimacy and membership of identity groups at the touch of a button, thus promoting a new sense of commonality and debate among the young just when old curmudgeons are throwing earth on the grave of supposedly deceased ‘community spirit’. From the once-a-day stuffy announcements of old BBC six o’clock headlines, news now travels at light speed via a million channels, challenging the ability of conventional ‘stop press’ media to keep up, or of governments to keep down, and political movements and trends form literally overnight, challenging regimes from Syria to Ukraine. The future isn’t a shock. What is a shock is the discovery that we can make our own future, and that it doesn’t have to be what our masters tell us it should be. That’s encouraging to anyone who wants progress, and especially to socialists, who can easily feel marginalised and ignored in all the hubbub. The world might not be listening to us today, but give it 24 hours and all bets are off.