Who’s Terrifying Who and Why? 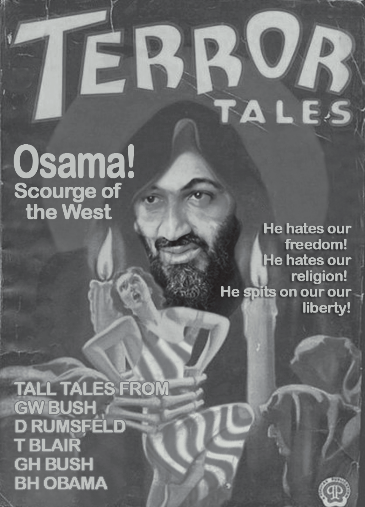 The Killing of Bin Laden

What is the War on Terror? Why do governments want us to be afraid?

The execution of Osama Bin Laden, announced on 1 May by President Obama, has been fêted as a great tactical victory by the White House, by Western governments and the world’s media. The longed-for news saw a wave of nationalistic, back-slapping hysteria in the US and the killing has served as a sorely needed propaganda tool to enhance the standing of the US military in the eyes of the domestic public.

Some in the Obama administration quickly seized on the Pakistan achievement to promote their own sinister agenda, with Americans reliably informed that their doubts on the use of torture were misplaced and that Bin Laden was actually found as a direct result of information gleaned by the CIA’s torture of captives

Despite world-wide celebrations and Obama’s rise in popularity at home and the propaganda value of the killing, there is no evidence that the death will have any impact on the flagging military and political situation of the US in South Asia, the Middle East and other theatres of high tension.

The death of Bin Laden has been seen as affording the US an escape strategy from Afghanistan, bringing closure to a decade of embarrassment in the country. To be sure, the US attempts to create a pliant puppet regime in Kabul are failing. The Taliban, or indeed, Al Qaeda, are no nearer defeat than ten years ago and still notching up US casualties. Quite significantly, in the latter regard, at Kabul airport on 29 April, nine high-ranking US military officers were assassinated by a “reliable” Afghan fighter pilot. That this attack happened in an ostensibly high security area, implies that no place in Afghanistan is secure from attack, that anyone is vulnerable, and that not even allied Afghan military personnel can be trusted.

With the US tied down in an unpopular war in Afghanistan, domestic woes rising and his political standing falling, it would seem Obama was desperate for a military success story, more so considering 9/11 is now a decade ago and years of rampant military expenditure are factoring high in the current budget deficit.

Terror, what is it?

Undoubtedly, the ‘War on Terror’ will continue to serve many interests, with politicians promoting the concept at every opportunity to justify overseas military actions and to keep the public in a state of mild panic. It is thus worth looking at the concept of terrorism itself and to judge the definers by their own definition.

The US Army Manual definition of terrorism is “the calculated use of violence or the threat of violence, to attain goals that are political, religious or ideological in nature, through intimidation, coercion or instilling fear.”

This is quite close to the British government’s definition, which is “the use, or threat, of action which is violent, damaging or disrupting, and is intended to influence the government, or intimidate the public, and is for the purpose of advancing a political, religious or ideological case.”

One aim of The War on Terror is to frighten us – to get us all paranoid about a freedom-loathing bogeyman who is just waiting to come and destroy all we hold sacred – and to get us to fall in line behind the wider objectives of US and British foreign policy, which are in reality the objectives of a small corporate elite who really call the shots in both countries.

George Bush was every bit the terroriser when he introduced the “Shock and Awe” strategy of 2003 and indeed when he announced, “Either you are with us or you are with the terrorists”. Likewise with Tony Blair who announced to a terrified British public that Saddam could reach Britain with his WMDs within 45 minutes – a fact that that later proved to be total fallacy.

It is, perhaps, important to set the war on terror in context. America, for 45 years, terrified us with the threat of the Soviet menace, meanwhile expanding its reach all over the world. When the Kremlin’s empire collapsed, America suddenly found itself deprived of its hegemonic credentials, no longer able to use its anti-communist passport to interfere in global affairs from Cuba to Vladivostok. The end of the cold war meant it was stamped null and void.

It now needed a new propaganda framework through which to assert its authority on the international stage, a new enemy, a new bogeyman to protect us all from – and the first bogeyman who reared his head was Saddam Hussein, who invaded Kuwait within two years of the Berlin Wall falling, sparking the first Gulf War and the start of the US obsession with Iraq that has lasted 20 years. Saddam would later be joined by Bin Laden in 2001 after 9/11, the events of which all of us are now over-familiar with.

Notably, the language and jargon used to discuss the War on Terror, all its definitions, is chosen by the US political elite. Likewise it is the US that gets to delineate the ideology of the enemy, whether it be fascist or communist or militant Islamic. In the case in question it would have been insensitive in the extreme to declare a war on Islam, so North Korea had to be incorporated into Bush’s ‘Axis of Evil’, lest the entire Islamic world rise up against the USA.

The US has certainly benefited from the War on Terror, extending its reach like no empire in history. It now has in excess of 700 military bases around the world, and these bases can be found in 177 of the world’s 193 UN recognised countries. More likely, it seems the War on Terror has everything to do with full spectrum dominance and the desire of the US capitalist elite to control the world’s mineral wealth, trade routes, foreign markets, areas of influence and to maintain the strategic sites from which all these sources of profit can be defended. Little wonder there are many who claim that if Osama Bin Laden did not exist, it would be necessary to create him to get into Afghanistan.

Then why Afghanistan? The Caspian Basin, which the country borders, contains an estimated $12 trillion dollars worth of oil. It is not the case that he US wants this oil for itself, but needs a presence in Afghanistan to be able to control just who does have access to it.

There are real contenders against US economic supremacy, namely India, Russia and China, all with a growing and insatiable thirst for oil to lubricate the wheels of their own profit machines. By controlling as much oil as they can, the US gets to stack the odds in its own favour.

But before you can mobilise to take over the world’s scarce resources you first need to get your people on your side. You need their consent, their support and their approval of you as the champion of freedom. This is why George Bush could so cleverly tell the American people: “They hate our freedom, our freedom of religion, our freedom to vote and assemble and disagree with one another,” and that “you are either with us or with the terrorists.”

This was not just Orwellian double-speak. This tactic came straight from Nazi Germany and from Joseph Goebbels:

“If you tell a lie big enough and keep repeating it, people will eventually come to believe it. The lie can be maintained only for such time as the state can shield the people from the political, economic and/or military consequences of the lie … The truth is the mortal enemy of the lie, and thus by extension, the truth is the greatest enemy of the state.”

Since 11 September, 2001, the governments of George W. Bush and then Barack Obama and Tony Blair told and repeated a “lie big enough” to confirm Joseph Goebbels’ statement, and the American and British people have come to believe it. It is the “War on Terror.”

Whilst we were informed that the invasions of Afghanistan and Iraq were in retaliation for 9/11, it is now clear that the Bush administration had them clearly in mind upon taking office, and set in motion as early as 3 February 2001, some seven months before 9/11 and thus they had nothing to do with terrorism.

The War on Terror has not only validated the US passport –  that allows it to play the role of globo-cop to further the interests of its own capitalist elite, pushing aside anyone who gets in its way – it has also strengthened the hand of the state at home also. For out of the war on terror came the Patriot Act (USA) and the Terrorism Act (Britain) which put civil disobedience on a par with a felony.