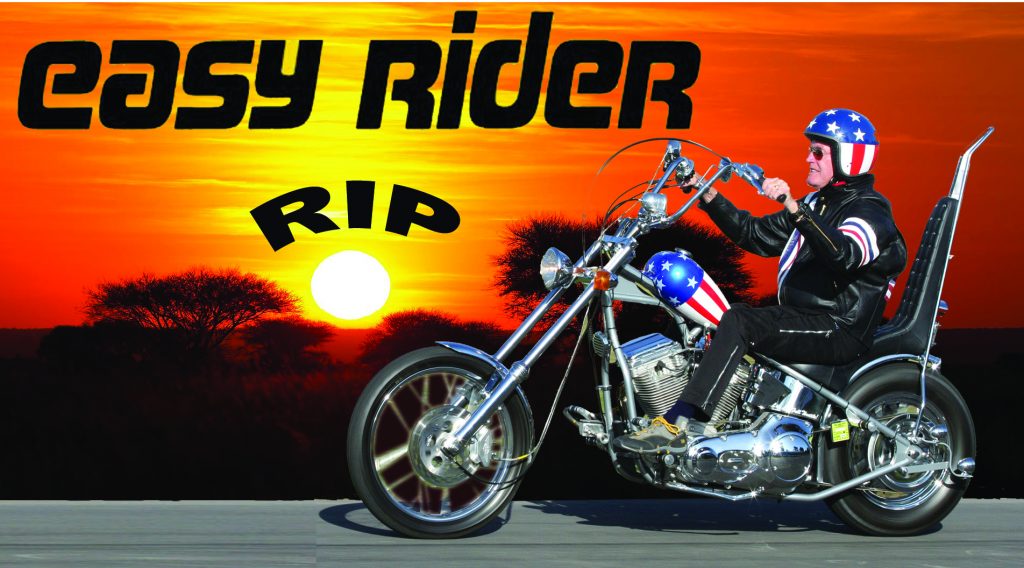 Transcript of a scene from the film in which Peter Fonda who died last month played Wyatt.

Billy: No, man, like, hey man, wow! I was watching this object, man, like the satellite we saw the other night right and it was going across the sky, man, and then it just suddenly, yeah, it just changed direction and went whizzing right off, man. It flashed . . .

Wyatt: You’re stoned out of your mind, man.

Billy: Oh yeah, I’m stoned, man. But like, I saw a satellite, man, and it was going across the sky and it flashed three times at me and zigzagged and whizzed off, man, and I saw it.

George: That was a UFO beaming back at you. Me and Eric Heisman was down Mexico two weeks ago. We seen forty of them flying in formation. They’ve got bases all over the world now. They’ve been coming here ever since 1946 when the scientists started bouncing radar beams off of the moon. And they have been living and working among us in vast quantities ever since. The government knows all about them.

Billy: What are you talking, man?

George: Well, you just seen one of them, didn’t you?

Billy: Hey man, I saw something, man, but I didn’t see it working here, you know what I mean.

George: Well, they are people just like us, from within our own solar system. Except that their society is more highly evolved. I mean, they don’t have no wars, they got no monetary system, they don’t have any leaders, because I mean each man is a leader. I mean each man… Because of their technology they are able to feed, clothe, house and transport themselves equally and with no effort.