Socialists are opposed to capitalism and its parties, Left, Right or in between. From our Declaration of Principles: ‘That as all political parties are but the expression of class interests, and as the interest of the working class is diametrically opposed to the interests of all sections of the master class, the party seeking working class emancipation must be hostile to every other party.’ We have as a Party, since our inception in 1904, been maligned, misunderstood, occasionally praised but more often than not just ignored. The conservative news site www.bizpakreview.com recently drew attention to our Twitter feed in an article titled ‘Stephen King and writer of HBO series get ‘Chernobyl’d’ by Dan Bongino when they make the show about Trump’ (31 May). Such attention is very rare, however. Ironically, it is often those praising ‘socialism’ who do just as much damage as its opponents: Andre Vltchek, author of ‘Europe in irreversible decay, UE [sic] elections are proof of it!’ (informationclearinghouse.info, 1 June) is just one example.

Tweeting for socialism or the status quo

@OfficialSPGB takes @dbongino to task for tweeting ‘Why do Hollywood elitists continue to publicly humiliate themselves on Twitter? Chernobyl was a failure of socialism (where the govt controls the means of production), the exact opposite of the Trump deregulation and tax cut agenda.’ We replied ‘You persist in trying to keep the lie going that socialism is “where the govt controls the means of production”. The truth (not that you’re interested in that, obviously) is that socialism is where THE PEOPLE own and control the means of production. The USSR had state capitalism.’ Tom Tillison, author of the BPR piece in question, is incredulous. Yes, the Bolshevik coup d’etat of November 1917 hastened the development of capitalism there, not socialism. Lenin admitted such, and we made our position clear as early as August 1918 in ‘The Revolution in Russia – Where It Fails.’ Reading the BPR article could leave one with the impression that the ‘West’ has no record of nuclear accidents! There are currently 454 operable civil nuclear reactors around the world, with a further 54 under construction. Given worldwide capitalism’s concern for profits over people, further ‘accidents’ are inevitable.

Workers have no country

Vltchek, who recently toured seven EU countries, described as ‘decaying..even collapsing,‘ and met some of the people there, adds: ‘What I did not witness, was hope, or enthusiasm. There was no optimism. No healthy and productive exchange of ideas, or profound debate; something I am so used to in China, Russia or Venezuela, just confusion, apathy and decay everywhere. And hate for those countries that are better, more human, more advanced, and full of socialist enthusiasm.’ At one point even North Korea gets a favourable mention: ‘ On both sides of the Atlantic, the establishment is in panic. Their world is in crises, and the ‘crises’ arrived mainly because several great countries, including China, Russia, Iran, but also South Africa, Turkey, Venezuela, DPRK and the Philippines, are openly refusing to play in accordance with the script drawn in Washington, London and Paris.’ And his remedy: ‘ Let us [put] the people of Russia first … China first! And, Asia, Africa, Latin America first!’

Lenin wrote tellingly of Russia in 1918: ‘reality says that state capitalism would be a step forward for us; if we were able to bring about state capitalism in a short time it would be a victory for us’ (The Chief Task of Our Time). In his Report of an Investigation into the Peasant Movement in Hunan (1927), Mao admitted that the coming revolution would not be socialist: ‘To overthrow 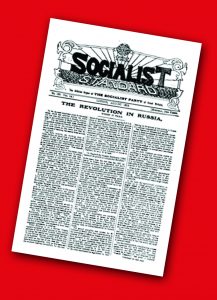 these feudal forces is the real objective of the revolution’. Iran is a theocratic dictatorship – Hell on Earth for scientific materialists! – and North Korea a family-run cult cum kleptocracy. ‘Maduro recognizes Venezuela is still a capitalist-based economy…’ (Popular Resistance newsletter, 27 May, 2018). Capitalist hallmarks, such as class society, commodity production, profit motive, exploitation of wage labour, markets, etc., are found worldwide. If you are of the Left, Right or in between and do not believe the capitalist stooge Vltchek, any of his anti-working class heroes, or us consider Thatcher: ‘there is only one economic system in the world, and that is capitalism. The difference lies in whether the capital is in the hands of the state or whether the greater part of it is in the hands of people outside of state control’ (House of Commons speech, 24 November, 1976).