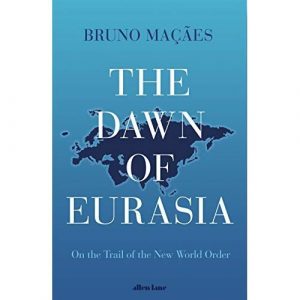 Bruno Maçães: The Dawn of Eurasia: On the Trail of the New World Order. Penguin £9.99.

The boundary between Europe and Asia is not clearly marked, unlike those between other continents, so it is hardly surprising that people have long referred to a ‘supercontinent’ termed Eurasia. Nor is it surprising that a region which contains Japan, China, India, Russia and the European Union is likely to play a crucial strategic and economic role in future years. So the general point of this book, written by a former Portuguese politician, is not very original, but it does contain some interesting specific discussions, partly based on a six-month journey that Maçães took around parts of Eurasia in 2015–16.

Events in Ukraine have increased tensions between Russia and the West, leading Russia to closer ties with China, as an export market and a source of investment. Russia will supply natural gas to​_​_ China for a period of thirty years, and the construction of the pipeline has begun. Rather than war being the continuation of politics, as Clausewitz claimed, now ‘Pipelines are the continuation of war by other means’.

China’s Belt and Road Initiative naturally receives a lot of attention here, but there are also references to potential problems. So India’s participation is in doubt, on the grounds of unsustainable debt burdens being created. Things have become more problematic recently, with India not attending the project’s summit meeting held this April, and many calling for less reliance on coal and less emphasis on China as the sole mover behind the Belt and Road. Yet it is also intended to expand the project, with plans in Russia and China for an ‘Ice Silk Road’ across the Arctic, which would give China an alternative sea route to Western Europe and the Atlantic.

Russia is the moving force behind the Eurasian Economic Union, formed in 2015, aimed at free trade and compatible regulations. Its other members are Belarus, Kazakhstan, Kyrgyzstan and Armenia (which, under Russian pressure, abandoned any intentions to join the European Union). As for India, it could become a considerable naval power, helping to defend massive infrastructure undertakings along the Indian Ocean coastline to facilitate trade between India and China.

On his trip round parts of Eurasia, Maçães visited Yiwu, a city two hours by train south from Shanghai. Traders come there from Pakistan, the Middle East and Africa to purchase Chinese goods. It is a big market for toys, among other things, with around 100,000 stalls in total, and has a direct train connection to Madrid. He talked to a Chinese woman and her Indian husband, who met at the market and now sell glass hardware; their daughter is ‘a product of Indian and Chinese collaboration’. 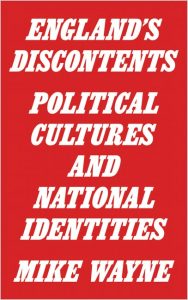 This is an attempt to make sense of political cultures and national identities with a particular focus on England in the light of both Brexit and moves towards Scottish independence. It is influenced heavily by the Italian quasi-Marxist Antonio Gramsci and his concept of hegemony. As such, much of the book is concerned with the formation of political cultures and identities – and how these inform national identity and political movements.

It is full of phrases like ‘highly multi-accentual’ and ‘counter-hegemonic organic intellectuals’ and so if you have an aversion to this sort of academic ‘discourse’ the book is not for you. Nevertheless, there are some good points within it and it is generally worth persevering. Much of it is concerned with the identification of ideologies and their key characteristics, mainly conservatism, economic liberalism, social liberalism and social democracy. Wayne explains the differences that characterise them and the relationships between them, including how they have often interlinked to form dominant ‘hegemonic blocs’ in various periods of modern British history. The most recent and notable has been the alliance between conservatism and economic liberalism, an alliance which is now facing various challenges as well as internal contradictions.

These inherent tensions between conservatism and economic liberalism are brought out well and mean that economic liberalism periodically finds common cause with social liberalism instead (as under Blair). This is because conservatism finds expression in three important strands of identity that the market economy of capitalism tends to undermine or contradict as a matter of course – ethnic/religious identity, national identity and ‘deep-history’ identifications (ie, tradition, routines and rituals, etc). As Wayne explains rather neatly:

‘Together these three strands attempt to create a moral framework for an economic system that does not have one, a point of national identification for a mode of production whose expansionary logic cannot be contained within the nation-state and a slowing down of historical change for a revolutionary change-obsessed mode of production’ (p.69).

These are the types of tensions he sees as having helped (among other things) fuel populism in recent years and it’s difficult to disagree. Sadly, as a counter-balance Wayne seems to be a calling for the recreation of the historic bloc that was based, in his terms, on the alliance of social liberalism and social democracy that dominated the post-war period in the UK until it started to break down in the 1970s and was rolled back in the 80s. He sees leftist Scottish nationalism as a potential vehicle for rekindling this and seriously underplays the negative role that nationalism plays in countries like Scotland where it is not as overtly right-wing and conservative as it typically is in places like England. But it is interesting too, that much polling evidence shows that the ideological make-up of the Scottish population is actually rather less different than is often supposed to that of England and Wales, especially on major left/right issues – and this goes unmentioned.

Also unmentioned is any real sense of what socialism might mean. It is a word used occasionally in historic contexts but it is never really made apparent what this is or how it might relate to (or seek to oppose) the other ideologies – or, for that matter, the tendencies some of them have helped foster that Wayne finds abhorrent in modern English political culture.

Give Them an Argument: Logic for the Left, by Ben Burgis, Zero Books 2019 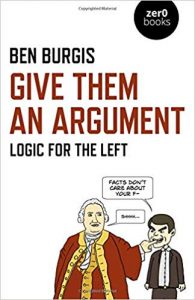 Socialist Party pamphlets used to carry the slogan ‘Incontrovertible Facts and Logical Argument’. As far as humanly possible, we still use these essential tools in making the case for socialism. However, these days much political argument takes place via the Internet where SHOUTING and fake news often take the place of facts and logic. Ben Burgis exposes the logical fallacies used in contemporary political debate (mainly in the USA) and provides examples of well-formed arguments, such as:

Premise One: Either social democratic reforms will be sufficient to solve the problems of capitalism or those problems can only be solved by expropriating the means of production.

Premise Two: Social democratic reforms will not be sufficient to solve the problems of capitalism.

Conclusion: Those problems can only be solved by expropriating the means of production.

Burgis describes himself as a Marxist, but there is a curious reluctance to follow his arguments through to their logical conclusion. He argues that businesses which move from country to country in the search for lower wages is something enabled by ‘particular policy choices’. ‘Different choices,’ Burgis claims, ‘would lead to different outcomes’. But the particular policy choices here are the logical consequence of a global system of production for profit. And then there’s the antagonism between wages and profits – that (other things being equal) higher profits are the result of lower wages and, vice versa, higher wages eat into profits. Burgis says that ‘in a different economic system’ technological advances could mean that workers could vote themselves shorter shifts or working fewer hours ‘for the same paycheck’. Not if it interferes with profit-making, they won’t.

Burgis is clear that socialism is the movement for the working-class majority of the population to take charge of society. Winning socialism means ‘(a) convincing a huge mass of people who don’t currently think that anything but capitalism is possible that there even can be a different kind of world and that they should fight for one, and then (b) going through an immensely complicated process, full of pitfalls and problems, in which that enormous group of people figures out together how it can all work’. This is fine as far as it goes. The trouble is it is missing conclusion (c): that in any post-capitalist society worthy of the name, wage labour and capital have been abolished. 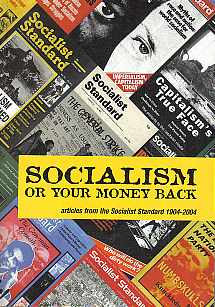 When the Socialist Party was formed, over a hundred years ago, there was widespread agreement that this was what socialism meant, despite disagreements as to how to get there. Unfortunately, as a result of the failure in the intervening period of both gradualist reformism and Leninist dictatorship, this is no longer the case. Reformists, who believed that capitalism could be gradually transformed through a series of social reform measures into a better society, themselves ended up being transformed into routine managers of the capitalist system. The Bolsheviks, who seized power as a minority under Lenin and Trotsky in Russia in 1917, ended up developing capitalism there in the form of a state-run capitalism under a one-party dictatorship. Both failures have given socialism a quite different – and unattractive – meaning: state ownership and control, even state dictatorship, which is what, as the Socialist Standard was pointing out even before both policies were tried, is more properly called state capitalism.

This has been represented as the ‘failure of socialism’. But socialism in its original sense has never been tried. If those who are committed to the interest of the majority class of wage and salary earners and who want a better society to replace capitalism are not to make the same mistakes of reformism and minority revolution that dominated radical thinking and action in the twentieth century, they need to return to the original idea of socialism and to the understanding that the quickest way to get there is to campaign for socialism directly and as a matter of urgency. This book is aimed at contributing to that understanding.

The seventy articles reprinted here provide a running commentary from a socialist perspective of the key events of the last hundred years as they happened. Two world wars, the Russian Revolution, the General Strike and the rise of Hitler are covered, as are the civil war in Spain, Hiroshima, the politics of pop, democracy and the silicon chip, and much more.

This book will be of interest to those wanting to study the political, economic and social history of the twentieth century, as well as to those committed to the interests of the majority class of wage and salary workers and who want a different society to replace the profit-wages-money system that is capitalism.

To order a copy, send cheque for £4 to Socialist Party, 52 Clapham High St, London SW4 7UN or by Paypal to spgb@worldsocialism.org.uk