Book Review: ‘The Alt-Right – What Everyone Needs to Know’

‘The Alt-Right: What Everyone Needs to Know’. By George Hawley (Oxford University Press £10.99) 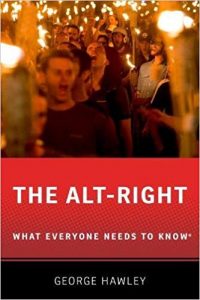 The label Alternative Right (now usually shortened to Alt-Right) was coined in 2008. It refers to a ‘far-right radical movement’ in the US, which has had some impact but is possibly now in decline, plagued by infighting. Here George Hawley discusses its origins, history and influences, and its connections to other political viewpoints.

As a movement rather than an actual party or organisation, the Alt-Right consists of a range of views, but the obnoxious core beliefs of its supporters can be described fairly simply. The oft-cited Fourteen Words are: ‘We must secure the existence of our people and a future for white children’, while the website of the National Policy Institute, an Alt-Right think tank, describes it as ‘dedicated to the heritage, identity, and future of people of European descent in the United States and around the world’. The Alt-Right is explicitly racist, seeing race as a biological category, and advocating white identity politics and a white ethnostate; it wishes to end all non-white immigration to the US. It is anti-Semitic, anti-feminist, and often misogynistic.  Some of its supporters are neo-Nazis, but by no means all. It is not populist, as it holds in contempt many who are not part of the elite, calling them ‘norms’ and viewing them as not ‘racially aware’.

The US political system, together with the vast sums spent by the two main parties, means that the Alt-Right has had little electoral success. It is mainly an online movement, setting up its own websites, making great use of social media, trolling people with other ideas and seeking to influence others. It has been open to doxing, where the real-world identities of anonymous Alt-Right bloggers and contributors are revealed by opponents, which often causes problems for them. Its informal nature means it is impossible to say how many supporters or sympathisers it has, though its core advocates are fortunately fairly few in number.

The main example of Alt-Right activism that was not online was the ‘Unite the Right’ rally in Charlottesville, Virginia in August 2017. This became very violent, with many protesting in opposition, and one counter-protester was killed when a car was driven into a group of them. The rally clearly harmed the Alt-Right’s reputation, though Donald Trump claimed that both sides shared responsibility for what happened.

Hawley gives a fairly thorough account of the various influences on the Alt-Right, their links to European organisations and their differences from mainstream conservatives. However, what the book lacks is much description and analysis of their ideas and aims. Presumably this is because, as he says, they do not ‘offer a coherent or well-developed set of policy proposals’. But some more discussion of the views of its main figures, beyond the brief descriptions given, would have been helpful.