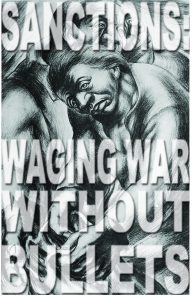 The Western powers promote sanctions as an alternative to war, holding that if sanctions can impose costs that exceed the benefits of objectionable policies of another country, there will be a change of those policies and if the targeted government declines to change, the affected population will protest, forcing their government to change. Economic sanctions are viewed as a useful tool to apply pressure on another country to mend its ways or as a punitive measure for its behaviour which avoids outright war. No matter how devastating the detrimental effects on the economy and the civilian population, sanctions are not as successful as claimed in achieving its objectives.

Who now recalls the cost on ordinary people of the UN-imposed sanctions against Saddam’s Iraq? Who remembers when the then US Ambassador to the United Nations, Madeleine Albright, was asked, ‘We have heard that half a million children have died. I mean, that’s more children than died in Hiroshima. And, you know, is the price worth it?’ Albright answered, ‘we think the price is worth it’. The half million figure has since been judged as inflated but at the time it was seen as a credible figure.

Denis Halliday, United Nations Humanitarian Coordinator, resigned after a 34-year career explaining he no longer wished ‘to be identified with a United Nations that is… maintaining a sanctions programme …which kills and maims people through chronic malnutrition… and continues this programme knowingly’, saying ‘I don’t want to administer a programme that satisfies the definition of genocide’. Halliday’s successor, Hans von Sponeck, subsequently also resigned in protest, calling the effects of the sanctions a ‘true human tragedy’. The resignation of Jutta Burghardt, head of the World Food Program in Iraq, soon followed, stating, ‘I fully support what Mr von Sponeck was saying. It is a true humanitarian tragedy what is happening here and I believe any human being who looks at the facts and the impact of the sanctions on the population will not deny that he is right.’ Agam Hasmy, Malaysia’s UN Ambassador, remarked at the UN Security Council in 2000 ‘How ironic is it that the same policy that is supposed to disarm Iraq of its weapons of mass destruction has itself become a weapon of mass destruction!’ Throughout history, starvation and disease have killed more people than all other weapons of war.

Too often sanctions are applied to soften up a foe and is a precursor of war. Sanctions can even be used as a justification for war such as when Tony Blair, in his testimony to the Chilcot Inquiry, argued that ending the sanctions was one of the benefits of the war.

Economic warfare has been part and parcel of conflicts since time immemorial with city sieges and naval blockades. We can date economic sanctions back at least to the Megarian decree of Athens in 435 BC, before the outbreak of the Peloponnesian War. But later we had the Napoleonic Wars, the World Wars, the American long-enforced trade embargo on Cuba and the anti-apartheid boycott of South Africa. Presently there are sanctions against North Korea, Iran and Venezuela. This article is not concerned about bans on financial transactions of named individuals but those that inflict suffering on the general population. Sanctions are viewed as an instrument of diplomacy, designed to pressure and to undermine a ruling regime. The purpose of sanctions is to cause a breakdown in the fabric of civil society.

On 23 March 2018, the Human Rights Council condemned unilateral coercive measures by a vote of 28 in favour, 15 against and 3 abstentions, because economic sanctions created economic crises, disrupted the production and distribution of food and medicine, and resulted in refugees.

Alfred De Zayas, a former secretary of the UN Human Rights Council, has said ‘Sanctions kill’ and that they fall most heavily on the poorest people. ‘Modern-day economic sanctions and blockades are comparable with medieval sieges of towns with the intention of forcing them to surrender. Twenty-first-century sanctions attempt to bring not just a town, but sovereign countries to their knees. A difference, perhaps, is that twenty-first-century sanctions are accompanied by the manipulation of public opinion through “fake news”, aggressive public relations and a pseudo-human rights rhetoric so as to give the impression that a human rights “end” justifies the criminal means’ (undocs.org/A/HRC/39/47/ADD.1).

John Pilger’s conclusion was that the sanctions were ‘One of the greatest acts of aggression: the medieval siege of Iraq.’

Patrick Cockburn wrote on the sanctions affecting Syria: ‘Economic sanctions are like a medieval siege but with a modern PR apparatus attached to justify what is being done. A difference is that such sieges used to be directed at starving out a single town or city while now they are aimed at squeezing whole countries into submission. An attraction for politicians is that sanctions can be sold to the public, though of course not to people at the receiving end, as more humane than military action. There is usually a pretence that foodstuffs and medical equipment are being allowed through freely and no mention is made of the financial and other regulatory obstacles making it impossible to deliver them’ (

The difficulty in processing SWIFT transactions, the banking system’s clearing house for international money transfers, has hindered the import of medicines and other necessities so many of the biggest pharmaceutical companies refuse to do business with the country.

The Spanish economist Alfredo Serrano, head of the Centro Estratégico Latinoamericano de Geopolítica, drew attention to the reluctance of banks to process Venezuelan international transactions, creating an obstacle in obtaining insulin and other medicines such as anti-retroviral and anti-malaria drugs.

Sanctions have a snowballing effect. Foreign businesses, fearing they might unknowingly cross a line into impermissible activities, prefer to shy away even from authorised trade. Transaction costs particularly related to food and medicine escalate, while access to foreign currency to trade has diminished. Sanctions lead to unprecedented levels of inflation and spikes in the price of basic goods like milk and vegetable oil.

Sanctions can and do kill the innocent. Sanctions rarely harm the decision-makers but have caused extreme hardship to those who are the weakest, the most vulnerable and the least political. Members of the elite with greatest access to government privileges are best positioned to survive and can even thrive. Under the sanctions, there are those who are savvy enough to exploit others’ deprivation for a profit. They function as middlemen and brokers becoming wealthy. Smuggling and clandestine networks arise and result in a shadow economy in which corrupt officials are fully complicit.

Between 1945 and 1990, the UN had imposed sanctions only twice but now sanctions are being imposed with increasing frequency, with the United States either the key player in instigating them or taking the initiative by imposing its own sanctions unilaterally. The United States uses its global economic power as leverage to pressure other nations into compliance with its sanction policies. The United States has the sovereign right to refuse to enter into commerce with other states, but not to exercise pressure on third-party states in order to harm their targets, and attempting to do this is a violation of the United Nations Charter. But as always ‘might is right.’

Obvious Vengeyi from the University of Zimbabwe makes a direct comparison with siege warfare:

There exists a glaring anomaly. It is illegal in war-time, a violation of the Geneva Convention e.g. the 1977 Additional Protocols to the 1949 Geneva Conventions prohibit any wartime measure that has the effect of depriving a civilian population of objects indispensable to its survival; Article 33 of the Fourth Geneva Convention on the protection of civilians in wartime, for example, prohibits ‘collective penalties’. Yet under peace-time conditions economic sanctions are perfectly valid. Economic sanctions inflict collective punishment upon ordinary people when they have no connection to or control over the actions of the government whose actions have led to them being punished. Sanctions are inherently anti-humanitarian. As in siege warfare, it is the population and those least responsible for the state’s action – children, the elderly, the sick – who bear the worst consequences. When countries are called ‘rogue states’ or ‘the axis of evil’, Western countries proceed to put economic sanctions on them. But the victims are invariably the common people and not the ruling dictator they have been complaining about – whether it was Saddam Hussein then or Assad or Kim Jong-Un now.

Economic sanctions imposed on authoritarian regimes often fail to bring about the political change they are meant to create even though the people had to bear the pain of sanctions.

Lee Jones, a senior lecturer at Queen Mary University of London, stated that according to the accepted figure, sanctions succeed in about one third of instances. But a political scientist, Robert Pape, looked at these figures and argued that often the outcome was not caused by sanctions; it was caused instead by domestic insurgencies or by military threats, and if you take away those cases, then sanctions only succeed in fewer than 5 percent of cases. The ‘success’ story of South Africa is often cited to show that sanctions can work yet many commentators have suggested that the end of apartheid was due to internal political movements as much as to international sanctions. Politicians employ economic sanctions despite the evidence that they do not work – simply because the cost of military action is too high a price to pay. Cheaper to incite the civil population to revolt by driving them to take desperate measures.

It is generally accepted that you should not be a judge in your own case; that the law must be clearly stated, and consistently applied; that individuals can only be punished for their acts, not their nature or their potential acts. However, states interpret and impose the law as they wish, without restraint. This means that a whole population is harmed with the approval of ‘international law’. Sanctions imposed on a whole nation share all the characteristics of siege warfare such as blurring the distinction between the battlefield and by-standers, engulfing civilians in the violence of war through the destruction of society’s infrastructure. Those who defend sanctions share the same belief as a kidnapper who refuses food and water to his victim because the victim’s family declines to pay the ransom demand. The siege tactic  deliberately targets a civilian population with fatal consequences by withholding supplies and starving them yet it is a form of warfare which is considered legal and acceptable.