Last year Save the Children issued an emergency alert: ‘In war-torn Yemen, 85,000 children may have died from starvation since start of crisis. Families are forced to choose between food and other necessities, like water and medicine. 13 million people face starvation – many of them children. Please help.’ Nobody can fail to be moved by the pictures and accounts of the latest group of people starving unnecessarily. It really is an obscene crime against humanity that people should be dying of starvation in a world which is not only capable of producing enough to feed everybody but even has enough food stockpiled to stop it straightaway. Help comes with understanding: food, like every other commodity in the modern world, is produced primarily for profit, as this headline from Asia Times (31 October) attests: ‘In Yemen, plenty of food but few have the cash to buy it’. And: ‘While agriculture and food distribution suffer from the war, food remains available in markets across the country — but few can afford it. “All kinds of food and other items are available in the market. The problem is not a shortage of food in markets but that we do not have money to buy food that is now expensive,” Sofi said’ (Middle East Eye, 9 November).

Such analysis by two mainstream media outlets puts that of the Trotskyist International Committee of the Fourth International to shame. An article titled ‘At least 85,000 child deaths in Yemen highlight Saudi-US war crimes’ (wsws.org, 23 November) blames American imperialism and fails to mention that those with money in Yemen can, and do, have access to food as well as medicine. To be sure, Yemen being the battlefield for one of capitalism’s endemic wars complicates matters — and whenever war breaks out it is our class which suffers the most — but famines only affect those whose access to money or land has collapsed for some reason. Famines are a social not a natural phenomenon. 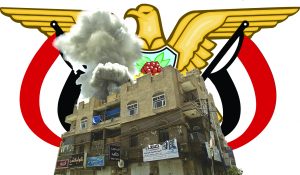 Wars are never fought in our interests. War often results when conflicts of interest between states over markets, sources of raw materials, energy supplies, trade routes, exploitable populations and areas of strategic importance cannot be resolved by other means. The article ‘Yemen Genocide About Oil Control’ (globalresearch.ca, 20 November) supports this view. ‘Yemen is a strategically key geopolitical stretch of land at the critical connecting point of the Red Sea which links to the Mediterranean via the Suez Canal and the Indian Ocean. It’s the site of one of the world’s most strategic shipping choke points, the Bab el Mandab, a narrow passage a mere 18 miles distance from Djibouti in the Horn of Africa, making it one of the US Department of Energy’s Oil Transit Chokepoints. According to the US Department of Energy an estimated 4.7 million barrels of oil passes through Bab el Mandab in both directions daily, including oil bound for China.’ The same article concludes: ‘[Prince Mohammed bin] Salman not surprisingly claimed it was a war of Iran-led “imperialists” against the forces of Saudi-led “freedom-loving” Sunnis. China now has its first overseas military base across from Yemen in Djibouti, next door to the US whose Camp Lemonnier is the largest American permanent military base in Africa. Former colonial occupier France is also there. There is far more at stake in Yemen than we are being told.’

When some semblance of peace is restored and the strategic port of Hodeidah is once again open for business, any food aid which arrives will likely be calculated using capitalism’s calculus. Protecting the market for food in Yemen is in fact a key factor shaping the so-called ‘food aid’ policies of governments and the UN. They know that to make available for free distribution anything but minimal amounts of food per starving person would be to undermine local markets and local market-oriented production, leading to more people coming to lose their access rights to food. And of course they are right. Given the market system this is exactly what would happen. So, quite apart from financial cost considerations, they deliberately limit the amount of free food they supply. Market forces will likely prevent the immediate starvation in Yemen being solved in the way that it would be, almost literally overnight, in a sane society, one that would have to be based on the common ownership of resources: transporting the food from the warehouses of Europe to the towns and villages of the former country of Yemen.