Wood for the Trees: Invisible Elephants

Whilst debating the reasons for the existence of homeless people in one of England’s most prosperous cities I was berated for bringing ‘capitalism’ into every conversation. I was told that if I was to go to the local shelter for the homeless they would inform me of reasons for their plight that had no connection with some political abstraction named capitalism. This is symptomatic of one of the dominant ideology’s greatest magic tricks; making capitalism invisible. Even those most affected by the malevolence of the system are usually quite unaware of its existence; to them their plight is just part of what it is to be ‘down on your luck’ or the result of ‘an addiction to alcohol’ etc. This form of political ignorance is very convenient for those who defend ‘the market system’ or ‘representative democracy’ – the term capitalism is rarely used by those who defend it because to do so would allow the possibility of an alternative. Because capitalism is everywhere it is nowhere. How has the system pulled off this startling illusion?

There are degrees of propaganda; from downright lies to nuances of emphasis. The invisibility of capitalism goes far beyond this realm of conscious manipulation of data and its interpretation – it has become ‘ideological’. In the Marxist sense this is a political concept that has been transformed into a collection of values and behaviours that appear almost ‘instinctive’. To question the existence of money, the nation-state, profit or wage slavery is to invite ridicule from those who have been conditioned by bourgeois ideology. This ubiquity of perspective has been achieved through a form of historical osmosis; the debates that raged during the transition to capitalism are hardly remembered, and if they are it is considered only to be of esoteric historical interest.

Capitalism arose simultaneously with the rise of science as the dominant description of the world. Among many of the ways of thinking that were adopted by the rising capitalist class were those that we might call ‘pseudo-scientific’. It became de rigueur in any analysis to deconstruct a given phenomenon into its smallest constituent parts. The world was seen as being built up from the small to the large. Economics, for instance, could best be understood in terms of small family or community economic activity which could be then extrapolated into a national or even global economic theory. Even today you still hear economists refer to ‘good housekeeping’ as being the paradigm of a successful economy. In contrast to this socialists have always based their understanding on seeing within the small a reflection of the large. 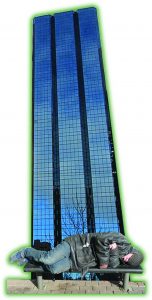 The imposed economic realities on the ‘household’ – wage slavery, consumerism, saving up to give their children a future, paying rent or a mortgage etc. would seem absurd and counter-intuitive without some understanding of the global market system and its laws of exploitation and exchange. The so-called ‘Robinson Crusoe’ explanation of basic human economic activity is nonsense because of the absence of the basic reality of capitalism which is social production and trade.

Seeing homelessness as somehow the fault of the homeless is like blaming you and the purchase of your garden chair for causing global deforestation. One may be a contributing factor within the other but without an understanding of the global system of production for profit (capitalism) it is impossible to see why consumerism necessitates the destruction of the environment. It’s the same with homelessness – sleeping in the doorways of empty buildings is symptomatic of the market system. It may be true that nobody has a ‘right’ to be housed but it is surely equally true that nobody has a ‘right’ to deny housing to those who desperately need it.

Capitalism destroys human rational and moral agency in the guise of a reality that is purely an ideological illusion; or to put it another way, private property exists to restrict the producers from access to their own products. On countless building sites across the country we see the working class creating estates for wages that will hardly enable them to retain their own homes which were in turn built by them. A ‘mortgage’ chains them into this never-ending cycle of alienated labour and is one of the reasons for the demise of so-called social housing building provision. The threat of eviction and homelessness is that much more vivid for those with mortgages, in contrast to social housing rents, because it is much more difficult to access housing benefit. For the capitalists this is a win-win situation because mortgages are usually considerably higher than council rents with the added bonus that the tenants are more fearful of eviction and so that much more compliant for higher exploitation at work – many of them creating homes for the same financial motives and so perpetuating the nightmare. The whole corrupt, insane system exists because it is a ‘cash-cow’ for the rich and for no other reason.

The next time you see someone step over the body of another who is ‘sleeping rough’, as if the recumbent body was merely another item of street furniture, put aside all of your economic text books which tell you why capitalism is so wonderful and see that casual callous action as a consequence of an ideological ignorance manufactured for you, alongside your iPhone and stylish footwear, by capitalism.