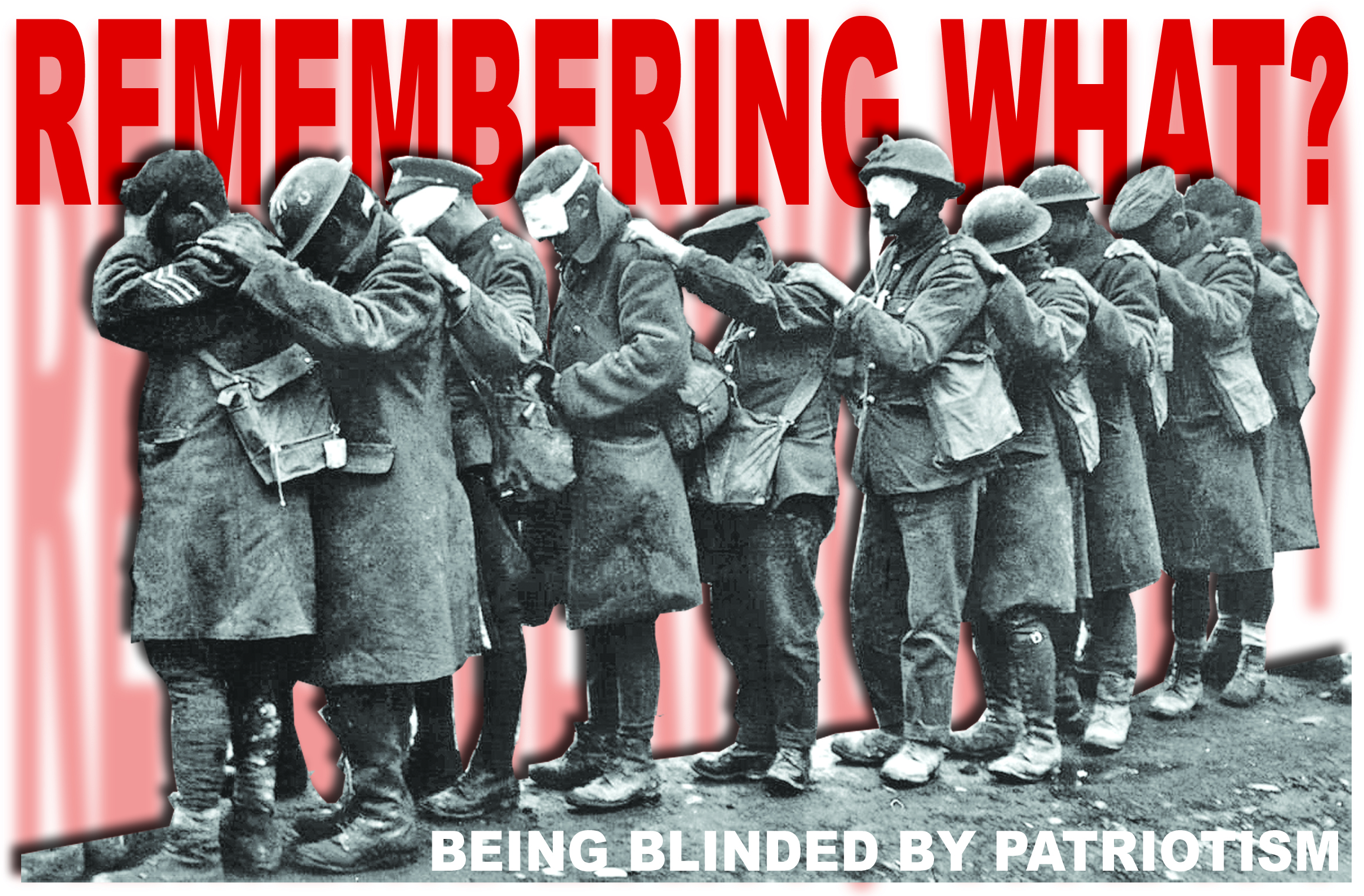 Every year about this time we get bombarded with exhortations to remember. This year, the centenary of the end of the war that didn’t end all wars, it is going to be worse. People who have no compunction in reporting cold callers to the police turn up on your doorstep asking for a donation in return for a piece of red paper on a green bit of plastic; people who confront you on tube stations asking for money with the word ‘poppy’ are smiled upon, whereas those poor bastards who sit silently with a sign asking for some money to find a place to stay or something to eat are seen as social pariahs. Everywhere we are reminded of the supreme sacrifice for our freedom made by people who will not grow old as we grow old with an exhortation to remember. If you don’t remember in the way expected, you are somehow disloyal or contributing to the demise of civilisation.

For a socialist, I have been to quite a few Remembrance Day parades. As children growing up in the sixties there was not much to do of a Tuesday evening and the Cubs and Scouts seemed like a good option – it was definitely preferable to the more militaristic Boys Brigade. One of the downsides was that we had to attend a Remembrance Day service each year. I remember a two-minute silence which they broadcast from the Cenotaph, but I don’t recall any attempt to understand the causes of what we were commemorating or to see things from the perspective of the Germans – the pantomime villains in the Victor comics that we read.

Fast forward a further thirty years, a period encompassing the involvement in wars in Serbia, the Gulf, Afghanistan, Iraq, and elsewhere. I went to another Remembrance Day parade. This was also due to the invidious influence of Baden Powell’s organisation. We had, despite misgivings about the duty to God and the Queen stuff, agreed to our son’s requests to join his local Cub group. Again, one of the downsides is that he is expected to attend the local Remembrance Sunday parade each year. I hoped it would not be too bad. The 200 or so from the village in which we live who joined the carnage that was the First World War comprised the majority of the fit and able-bodied men. Of these 42 were killed – for some reason about a third of these are not listed on the war memorial. More recently there had been regular reports of valiant British troops dying in Afghanistan (every one a saint) that might at least provoke the youngsters to think critically about War.

Fat chance. I had a bad feeling on arriving at the Village Green, when I saw that the Boys Brigade Band were present. There was an assorted group of men dressed in greatcoats, wearing assorted medal ribbons, saluting each other, and discussing their ‘service’ experiences – or however many Fritzes or Arabs they had offed. I guessed that most had been involved in the Second World War or Korea, although there were clearly some from later conflicts. These past servants of the monarch filed in behind the youth organisations, treated like Gods. I think that Harry and I were the only ones without a poppy.

Not much chance of the band playing ‘Give Peace a Chance’ or ‘I don’t want to join the Army’. Unsurprisingly the youngsters went off down the round to ‘Men of Harlech’, ‘Blaydon Races’, ‘The Dambusters’ and ‘The Great Escape’ (or ‘the Great Round Up’ as the German comic Henning Wehn describes it). Watching them disappear down the road to the Church gave me a vague feeling that this was how regimental bands lead the cannon fodder to meet the cannon.

Anyhow, the service. Surely we would get something based on thou shalt not kill, even if it did not go so far as thinking about whether it is right to covet thy neighbour’s oil. Not much chance from a vicar imbued with a sense of patriotism from his role as a chaplain in the Napoleonic War recreation society. Having said that, it could have been worse. There was some attempt to think about the horrors faced, as the Vicar had got hold of a couple of pieces of shrapnel from the Neuve Chappelle battlefield and passed them round. I cannot imagine how horrible it must have been to have a shell explode above you and for great red hot chunks of metal like that to be flying at you. Unfortunately this was seen very much from the British and Commonwealth perspective and the overall tone of the event was that the British, and whoever was fortunate enough to be their allies at the time, were and still are a non-ending force for good in the world, assisted of course by God. The songs were worse.

It was therefore not surprising that there was no acknowledgement that ‘we’ were equally predisposed to chucking shrapnel as the Germans, despite the fact that it was not possible to tell whether the shrapnel had been made by Krupps or by the factories of one of the hard-faced men who did rather well out of the First World War. Equally there was no attempt to acknowledge that people other than ‘our’ troops had suffered in the various conflicts in which the UK has been involved in the seventy years of peace since VJ Day. The whole thing ended when they read out the names of the glorious dead – or at least those who made the war memorial – and we were required to file past the war memorial and lay our poppies on it. Bit embarrassing that one, but I managed to fade away with Harry whilst the old men in greatcoats continued to talk about those they had offed.

So that was that. I won’t be back. In recent years we have acquired a library of songs by Leon Rosselson and Robb Johnson which gives a selection of material to play at loud volume at midday British Summer Time on the second Sunday in November each year. Leon Rosselson’s back catalogue includes a song entitled ‘Remembrance Day’ in which the coarse and ill-bred voice of the fallen and the dead interrupts a service at the Cenotaph with the observation that ‘We do not want your two minutes silence you can stuff it up your arse’. But what is wrong with remembering the unnecessary deaths of anything up to 150 million people in the twentieth century, not forgetting those who have died before or since. It is clear to most people that war’s war and it’s nasty and it brutalises those who participate in it – even if they are not killed or injured. Interestingly, there is evidence of psychological problems faced by those sitting behind desks in Arizona or Nevada, or possibly Barford St John, chucking missiles into Afghan villages and wedding celebrations.

In some ways the losses are so vast as to be impersonal – 35,000 killed on the First Day of the Somme and 11,000 at D-Day. However, each one is a tragedy and has a ripple effect on friends and family across many generations. We went to a church in Malvern recently in which memorials commemorates the loss of three subalterns from the same family in the First World War with the fourth and final one shot by the IRA as retaliation for some mindless act of brutality by the Black and Tans. I can only imagine what that family went through.

On a personal level, one of my greatest fears is that my son will be forced into the forces, and one of my more vivid memories of recent years is the relief on the faces of the parents of one of his friends that their son had flunked his A levels and would not be following his father to Sandhurst but would have to use his undoubted talents and charisma doing something useful, teaching children instead.

You could probably point to some instances in which the working class would probably have suffered more if the outcome of particular conflicts had gone the other way – for example would the SPGB exist today if Hitler had been victorious, and it is arguable that overthrow of Milosovich prevented further genocide in Bosnia. Conversely, would the working class have suffered less overall if the outcome of the Spanish Civil War had been different.

These are interesting historical debates but irrelevant to the socialist cause, which sees war as an inevitable by-product of the capitalist system. Having come from a shortish line of ‘conchies’ and Party members, I have never felt like taking the shilling and am pleased that I am probably now too old to face the undoubted pressure that people faced to do a century or so ago. I don’t pretend that I can relate to the men in greatcoats and do not know how I would fare in the face of real danger – actually I do but I don’t want to say.

There would perhaps be nothing much wrong with either remembering the losses or working to mitigate the horrendous effects that war can have on those who fight it, if remembering the losses and the suffering was accompanied by a genuine commitment that they would not be repeated (even if it fell short of a real understanding of how the system generates conflict).

The work that Help for Heroes does in supporting those suffering from traumas of war is limited to British service personnel and qualified by the strapline exhorting people to contribute on the basis that they would be ‘part of the force for good’. The assumption of the remembrance process is that our boys are the honourable and truthful defenders of truth and justice against barbaric hordes who want to murder us all in our beds. If war ever was fair, it has become increasingly unfair as killing technology has evolved – it is difficult to see how people subject to predator drone attacks could see otherwise. Those who fight against the British do not see things in quite the same way.

So that is about that. We are fundamentally a social species and killing strangers is unnatural and unsettling. War is unnatural as people in war try to kill people who they do not know and who they might well like if they got to know them. The Sunday Times (7 November 2004) reported that the last surviving Tommy, Harry Patch, had gone back to Ypres to shake the hand of Charles Kuentz, Germany’s only surviving veteran from the war, commenting that

‘It was emotional. He is 107. We’ve had 87 years to think what war is. To me, it’s a licence to go out and murder. Why should the British government call me up and take me out to a battlefield to shoot a man I never knew, whose language I couldn’t speak? All those lives lost for a war finished over a table. Now what is the sense in that?’

The pressure to remember as a means to condoning future involvement in conflicts will be more this year, the centenary of peace in 1918. It is depressing that the working class will continue to accept this. I spent some time thinking of a pithy end to all this, but could do no better than an extract from the August 1919 Socialist Standard discussing the Versailles treaty, namely that the causes of war will remain whilst competition between capitalist groups for routes, markets and control of raw material exists:

‘Clearer than ever before stands out the great fact that there is no hope for real peace in the world until these various sections of workers recognise the common fundamental character of their slavery and set to work to remove it, thus ending the enslavement of the human race by the establishment of socialism.’