In our August issue we challenged those leftists who still cling to the belief that the Sandinistas in Nicaragua represent a progressive ideology. Many of those same left-wingers also continue to support and sympathise with the Maduro government in Venezuela and are excusing the authoritarian excesses that are taking place. They are reluctant to forget Hugo Chavez, and how he invested part of Venezuela’s oil wealth into social benefits for poor people that resulted in his popularity. 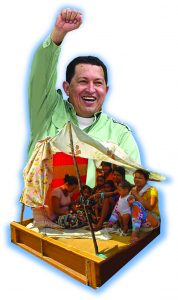 So, to explain the failure of his successors to continue this, they place blame for the current collapse of civil society elsewhere. American imperialist interference is said to be the culprit for the destabilisation of the Venezuela government by conspiring with the right-wing to overthrow Maduro by creating conditions for the breakdown of the economy. The USA has indeed imposed sanctions on Venezuela with this aim, and many Venezuelan businesses did divert their stocks to more profitable markets leaving shop shelves empty. But there is more to it than that. Chavez’s social policy was based on the rents from oil production remaining high. When oil prices fell, this could not continue and recourse to the printing press and price controls has resulted in shortages, inflation and unemployment, causing discontent.

Venezuela’s economic crisis and virtual collapse began a few years ago when rapidly falling oil prices meant that Chavez’s policy of subsidising the poor could not continue. The attempt to do so has transformed Venezuela into a humanitarian catastrophe which has turned the world’s media spotlight on the economic chaos and the dire conditions of the people there.

It has been reported that because of the high prices and shortages of food, in 2017 Venezuelans lost on average 11 kilograms (24 lbs) in body weight last year, nicknamed the ‘Maduro Diet’. UN Commission for Human Rights spokesperson Ravina Shamdasani says that 87 percent of the population is now affected by poverty:

‘The human rights situation of the people of Venezuela is dismal. When a box of blood pressure pills costs more than the monthly minimum salary and baby milk formula costs more than two months’ wages – but protesting against such an impossible situation can land you in jail – the extreme injustice of it all is stark’.

Unemployment has reached 30 percent. The IMF predicts that Venezuela’s inflation rate may well hit one million percent by the end of 2018. The situation has grown into a refugee crisis for Venezuela’s neighbours.

The UN has said that more than 7 percent – 2.3 million – of Venezuela’s population has left the country since 2015 to escape political violence and severe shortages of food and medicines. More than a million of them have crossed into Colombia since 2015. About half a million Venezuelan citizens have entered Ecuador since January. That is nearly 10 times the number of migrants and refugees who attempted to cross the Mediterranean into Europe over the same period. Ecuador has declared a state of emergency in its northern provinces. This year 117,000 have claimed political asylum in Brazil. Up to 45,000 Venezuelans have crossed the narrow straits to Trinidad and Tobago. Many other countries have imposed strict entry restrictions.

‘The exodus of Venezuelans from the country is one of Latin America’s largest mass-population movements in history. Many of the Venezuelans are moving on foot, in an odyssey of days and even weeks in precarious conditions. Many run out of resources to continue their journey, and left destitute are forced to live rough in public parks and resort to begging and other negative coping mechanism in order to meet their daily needs’. He added that ‘xenophobic reactions to the exodus have been noted in some quarters.’

Venezuelan Vice-President Delcy Rodríguez said the figures had been inflated by ‘enemy countries’ trying to justify a military intervention. Maduro has put the number at ‘no more than 600,000 in the last two years.’

Capitalism cannot be made to work in the permanent interest of the workers, even though there can be some temporary respite with pro-worker reforms. When the price of oil fell these temporary benefits in Venezuela could not be sustained. In the end, the economic laws of capitalism asserted themselves. The problem is that left-wingers never learn from history. They discover what they believe are shortcuts to socialism but which ultimately lead to disillusionment. It is the same mistake they repeat over and over again, resulting in our fellow-workers swinging back and forth like a pendulum from left-to-right and right-to-left.

What is most disappointing for socialists, aside from the despair and misery of our fellow-workers, are the left wingers who argued that Venezuelan Chavismo was somehow the path to ‘socialism’ (actually state capitalism, relying on oil rents). Such claims merely offer ammunition for the pro-capitalist apologists to say ‘Look at what’s happening in Venezuela – that is socialism for you’. But it wasn’t.