Why I am Striking: A Diary of the Universities Strike 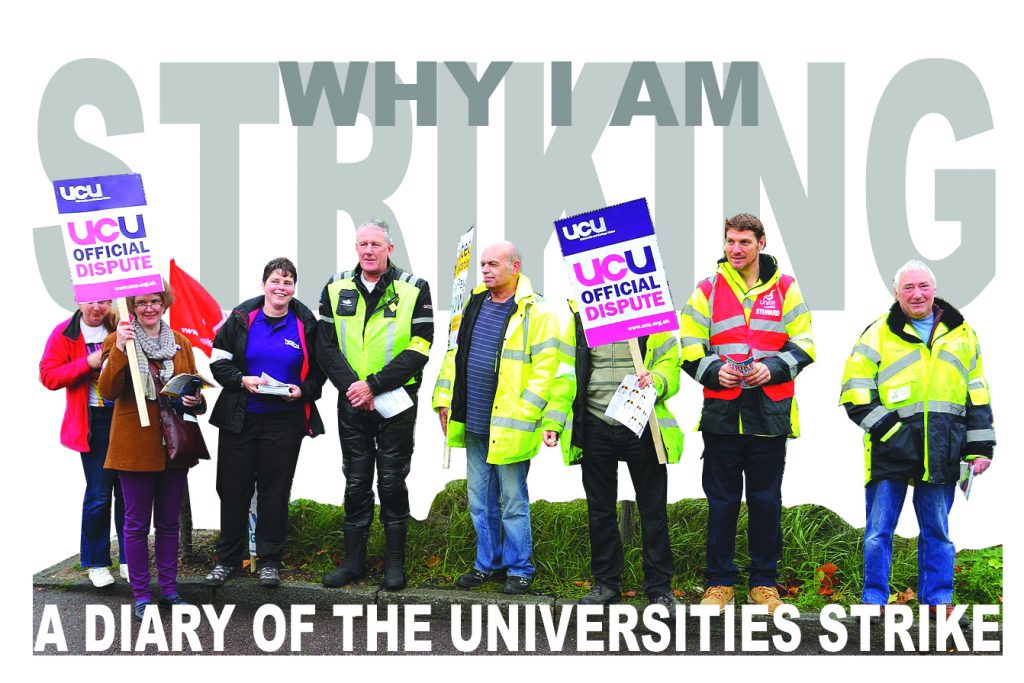 Day 5: Lecturers are on strike again, with the first tranche scheduled to last fourteen days in all. Cue jokes about academics sat at home not thinking, or troops being sent in to give seminars on the use of Christian symbolism in late-period Anglo Saxon poetry.

I am not an academic, nor am I even in their pension scheme, the root of the conflict. I am a university worker, and I have been standing on the freezing cold picket line, asking staff and students not to cross it.

The result of this is that instead of the gentlemanly dance of previous university strikes – two days here and there – the difficulty of getting a strike called at all means it has to be decisively disruptive: these are the counter-productive aspects of the Tories trying to regulate strikes out of existence, the pressure valve is gone, and it will make strikes more bitter.

The root cause is an attempt to change the Universities Superannuation Scheme (USS) pension from being a defined benefit scheme (where the academics will receive a guaranteed pension based on their career average salary), into a defined contribution scheme (where the benefit pays depending on the returns of the scheme’s investments, throwing all the liabilities of the Universities onto the vagaries of the bond and stock markets). The scheme has already changed from being final salary to being career average related (and employer and employee contributions have both been raised in recent years).

The cause of this is that under accounting rules, the scheme must be funded so that if all universities went bankrupt tomorrow, all the liabilities could be met. This creates a phantom deficit of billions of pounds, despite all universities not being bankrupt, and the scheme currently being able to manage its liabilities.

Make no mistake, universities are far removed from the rarefied world of a David Lodge novel: today they are vast Dickensian factories employing thousands of staff and servicing tens of thousands of students each. This is indicated in the scale of the strike, with a rough (low) estimate of 20,000 workers out. As Boris Johnson noted in his recent farcical speech on Brexit, Britain stands a long way up the value chain, not producing raw materials or components, but designs and innovation. Thousands of foreign, particularly Chinese, students come to the UK to study, bringing in much needed revenue.

When I discuss this matter, friends tell me that academics are lucky to still have defined benefit pensions, or that they themselves have had their pension downgraded. For me, this makes it all the more important to put a marker in the sand to stop this downgrading of all our deferred salaries.

I understand that what is at stake here is the ability to strike at all, and to have a conscious say in our workplaces: the academics are being attacked as workers, and they recognise their position as workers by calling this strike. They deserve support and solidarity, even at the cost of 14 days’ pay, because anything that makes employers think twice about downgrading terms and conditions of their employees is a benefit for all workers, everywhere.

Capitalism draws increasing numbers into the condition of wage slavery, many academics are on the equivalent of zero hours contracts, or have to continually search for funding for their own salaries. Of course, ending capitalism and abolishing the wages system is the necessary political act, but in the meanwhile the class struggle rumbles on, and we have to engage with the struggle to defend ourselves and pursue the best living standards we can manage within the labour market.

If we don’t strike, we all lose: and maybe, for all those students who smile wanly, shrug and say they have to go in to lectures, the library or to study, they can learn the lesson that they too will soon be waged workers, who will need solidarity to protect them in their workplaces.

Day 14: The strikes have succeeded so far in dragging the employers to the negotiating table, and throwing their ranks into disarray. The Vice Chancellors of several leading universities have come out in favour of returning to defined benefit. The talks, however, produced an offer which would have still seen lecturer’s pensions reduced by at least 19%, and threw in the added insult that lecturers should reschedule classes (which they have been deducted pay for not holding).

I was lucky enough to attend the rally outside UCU headquarters (down an alley in Camden Town), where hundreds of strikers turned up to lobby the committee and delegate meetings considering the offer. The usual toy-town revolutionaries are trying to paint this as a ‘revolt by the members’ against the leadership, where it was in fact the normal and proper functioning of democracy in a trade union. Indeed, my local branch have been running daily strike meetings to run the operation of the strike, and further, credit where it is due, a useful daily strike bulletin has been brought out by Socialist Worker:

There is a question of why the offer was accepted and put to the members given that it was so terrible (and promoted to and by the media as a resolution of the conflict, but some of that will be down to the way ACAS operates, as well as to the mandate given to the negotiators). It was heavily voted down by strikers on the picket lines, and voluble cries of ‘no capitulation’ on social media.

The scene is set then, for the strike to continue, and a further fourteen days in April and June have been approved (but not yet set). We’ve marched through the streets of London twice now (in relatively well-attended marches), and there is talk of the need to pressure government to agree to underwrite the pension scheme. Many academics are enjoying taking the details of the pension plan apart showing how the deficit is not real. A lecturer at Birkbeck has uncovered documents that show there has been a determination to end the defined benefit scheme since at least 2014 – the general idea is by curtailing the scheme’s liabilities, universities will be able to borrow more for building and expansion projects.

Students up and down the country have been occupying spaces on campus in solidarity, and ‘teach outs’ are commonplace across the country.

On a theoretical side, this strike is a demonstration of how commodity fetishism isn’t just a feature or process of capitalism, but a social strategy by the rich and powerful: they are trying to limit their responsibility to their employees through throwing it onto the market, rather than guaranteeing a level of income after we are superannuated.