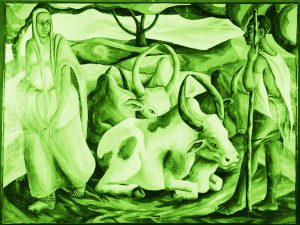 In March, the BBC’s website reported that more than a 100 people have been killed in the last three months in the Democratic Republic of Congo province of Ituri because of unrest between the Hema cattle herders and Lendu farmers fighting for control of land. In 2006, the BBC reported that as many as 60,000 people had died since 1998. Hundreds of thousands of people were forced from their homes, becoming refugees. Much of the animosity revolves around the 1973 land use law, which allows people to buy land they do not inhabit and, if their ownership is not contested for two years, evict any residents from the land. Some wealthy Hema used this law to force Lendu off their land, leading to a growing sense of resentment.

The conflict between herders and farmers isn’t an exclusively Congo problem. It’s prevalent in a number of countries across Central, East, North and West Africa, particularly in countries like Central African Republic, Cameroon, Kenya, Senegal, Gambia, South Sudan, Mali, and Nigeria. At first glance, these conflicts seem to be fuelled by the quest for grazing land by Fulani herdsmen. The conflicts between herdsmen and farmers are often triggered by attempts to prevent the cattle of nomadic herdsmen from grazing on crop farms. In many parts of Africa there are on-going conflicts often described as tribal, ethnic or religious wars but on closer scrutiny revealed to be between communities of nomadic herders and sedentary farmers. For generations, farmers and pastoralists have been vying with one another in the scramble for resources such as water either to irrigate fields or pastures for feeding animals thus triggering many violent conflicts. Pastoralists-agriculturalists’ conflicts have grown, spread and intensified over recent years. People have been killed, communities destroyed. Almost every day, there are more reprisal killings making peaceful resolution ever more difficult.

In the past, there was usually some sort of balance but these days, more often than not, the recurring fights are a symptom of a bigger problem such as industrial plantation agriculture or mining interest or conservation projects. Yefred Myenzi, a researcher from Tanzania’s Land Rights Research and Resources Institute, said that most of the fighting over land was the indirect result of decisions and actions taken by the state through its various agencies. ‘We have seen the influx of investors who take swathes of land to start commercial farming, ranching or mining activities, in the process triggering conflicts with local people who are evicted from their land without due process,’ he added. He also blamed the existing land tenure system for sidelining pastoral communities, since no land has been set aside for them. ‘Although land laws require every village to have in place a land use plan, many villages are yet to implement this due to conflict,’ he said. Of Tanzania’s 42 million people, only 0.02 percent have traditional land ownership titles. Tanzania has approximately 21 million head of cattle, the third largest number in Africa. Tanzania’s small-scale farmers produce more than 90 percent of the country’s food. Of the country’s 94.5 million hectares, only half – 44 million hectares – is arable land. The disputes over land and water have also caused food insecurity among farmers, many of whom have been unable to harvest crops for fear of reprisals from enraged pastoralists.

Different modes of production, that is, how a society produces its necessities of life, create various cultures, lifestyles and customs. This is a key element in the Materialist Conception of History. By studying society we learn that humanity is not the result of some eternal logic or divine laws but is created through our own actions as we produce the things we need and use every day. Losing their land means losing the ability to sustain themselves but farming and herding are not just sources of income, they define people’s lives. They will no longer be independent but must rely on government hand-outs or foreign food aid.

Climate change is now bringing with it unpredictable and decreasing rainfall seasons which have led to living conditions of farmers and herders becoming more precarious and insecure. Pastoralists are compelled to move beyond their accepted boundaries in search of water and pasture and risk clashing with other populations unwilling to share resources. It is evident that gradual and sudden environmental changes are already resulting in substantial population movements. Further climate change will displace more people, exacerbating the factors that lead to conflict. Experts say that these resource-based conflicts are also fuelled by ethnic hatred, dwindling resources, and poor land management.