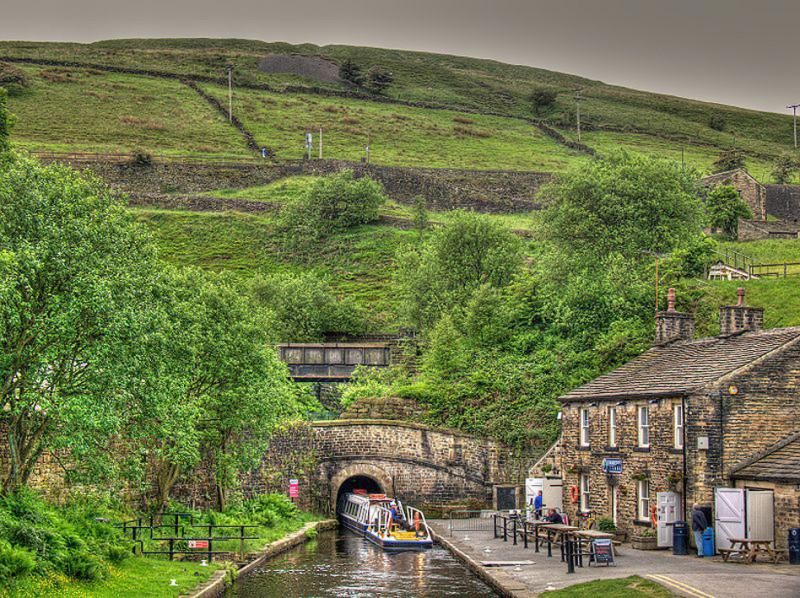 Travel between Lancashire and Yorkshire generally requires crossing the Pennines, whether by road, rail or canal. Some routes follow the hills and valleys, and were much used by pack-horses carrying cotton, wool and other goods, but as transport and other technology improved it became more practical to dig tunnels. The tunnel at Summit (near Littleborough) was, when completed in 1841 and for some years, the longest railway tunnel in the world. But some of the most interesting tunnels are those at Standedge (don’t pronounce the first ‘d’), between Diggle and Marsden.

There are three rail tunnels, built at various dates between 1848 and 1894 as the rail network expanded enormously. Only the 1894 tunnel, which is just over three miles long, is still in use. Earlier than these is the canal tunnel, which after several abortive attempts, was completed in 1811: it is often described as ‘the longest, deepest and highest canal tunnel in Britain’. It carries the Huddersfield Narrow Canal and for financial reasons, like a number of other canal tunnels, was built without a towpath, so narrow boats could not be pulled through it by horses. Instead, men called leggers had to lie on their backs and push against the tunnel roof or walls to move the boats. Usually two leggers worked together, and it took on average four hours for a loaded boat to go through the tunnel. As with many others, the Huddersfield Narrow Canal fell into disuse as canals became less popular for transporting goods and so ceased to be profitable, and closed in 1943. It reopened in 2001 for recreational use, largely through the work of volunteers, and trips through the tunnel are now possible (not powered by leggers).

At Marsden on the Yorkshire side is the Tunnel Visitor Centre. This contains some helpful display boards and a few original bits of equipment. The hard work of the navvies who built the canal and tunnels is referred to, but there seems to be no mention of those who died building them, and to be honest the centre is rather underwhelming. However, some fine walks on Marsden Moor and surrounding areas do allow you to explore the industrial and transport history of the local area, and so of Britain more generally.