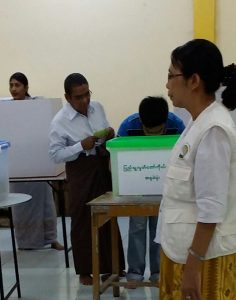 ‘Burmese generals throw in the towel’ was the headline in the Times (12 November). ‘President Thein Sein, the former Junta general, promised to hand over power to Ms Suu Kyi’s National League for Democracy.’

Office maybe, but not power. The fact is that the military of Burma (these days also called Myanmar) have not yielded political power to the will of the people.

On the Common Dreams website Mark Farmaner explains the constitutional reality (www.commondreams.org/views/2015/11/09/think-burma-democracy-now-think-again): to end economic sanctions and their pariah status, but having no wish to surrender control of the country and aware that they couldn’t win an election, the solution for the military elite was a new constitution which has the appearance of democracy yet which still left them in control.

The democratically elected MPs will be joined in the new parliament by another 116 MPs, all appointed by the head of the army, 25 percent of the total, who will choose one of the two vice presidents, and like them, will be a soldier. The head of the Burmese army also gets to choose key government ministers. The Defence Minister, Home Affairs Minister and Border Affairs Minister who will all be serving soldiers. This puts the armed forces outside of the control of the new government. The new government will not have control over the police, justice system, security services or issues in ethnic states where the army, according to numerous human rights organisations, have been committing war crimes and crimes against humanity.

Without control of the police or being able to create a truly independent judiciary people will still be able to be jailed for their political beliefs or actions. A National League for Democracy (NLD) government won’t be able to use the military budget to try to rein in the army. The army sets its own budget. The government has to make do with the money left over. No surprise, then, that military spending is higher than health and education combined.

Just in case an NLD government should still try to implement policies the military doesn’t like, above both parliament and government is a ‘National Defense and Security Council’. Constitutionally, it is the most powerful body in Burma. It has eleven members, six of whom come from the military, so it has a built-in majority. It could overrule decisions made by an NLD government. If these checks on the power of the government were not enough, the military also inserted clauses in the constitution that give it the right to retake power for vague and unspecified ‘national security’ and ‘national unity’ reasons. In the special case of Aung San Suu Kyi, the military placed a specific clause in the constitution that a president can’t have children who are citizens of foreign countries, which she does, just to prevent her ever becoming president.

This is not political democracy. The military dictatorship has tried to ensure that the state continues to be their ‘executive committee’ while offering the sop of token democracy. The military are fully integrated into the commerce of Burma, trading as capitalists in their own right, and to preserve their business interests they want to remain in control of the state. Mark Farmaner aptly describes it as ‘democracy on a leash’. Even so the NLD won enough seats to be able to appoint the president.  In Western democracies, a situation where the military are not under the control of the government and where the military appoint key government ministers, would be considered completely unacceptable.

The fact is the global capitalist system is willing to turn a convenient blind eye to reality if it provides access to Burma’s resources and markets. Aung Suu Kyi’s international reputation will help attract business and the multinationals are eager to see many more ‘Made in Myanmar’ labels. Despite what the Times claimed, there are a few more rounds to go before Burma attains political democracy.