Fings Ain’t Wot They Used T’Be, the comedy play with music by Frank Norman and Lionel Bart was revived in 2014 at the Theatre Royal, Stratford East in London, directed by Terry Johnson. The original 1959 production by Joan Littlewood’s Theatre Workshop was described by Littlewood as ‘Guys and Dolls but with its flies undone.’ The music and lyrics were written by Lionel Bart, a gay Jewish East End boy, or in his own words ‘a working-class homosexual Jewish junkie commie.’ 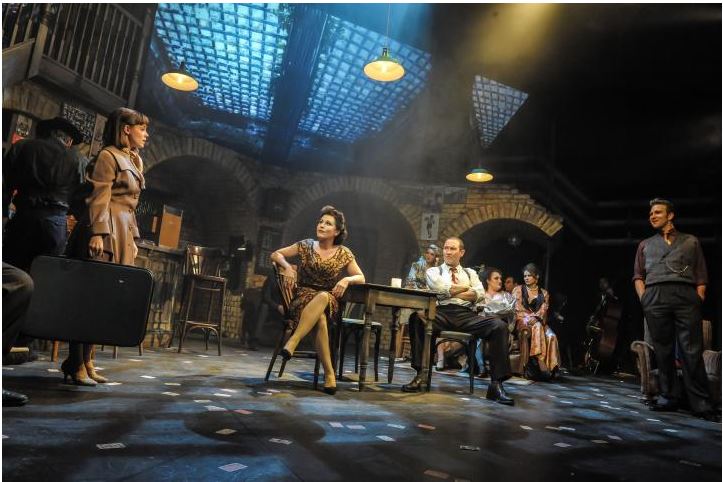 Fings depicts a world of the ‘lumpen proletariat’ of gamblers, pimps, prostitutes, razor gangs, and crooks in a struggling ‘schpieler’ (a mix of gambling joint and knocking shop) in a 1950s Soho reminiscent of Brecht’s The Threepenny Opera. The play is performed in cockney rhyming slang, thieves cant, and Polari, the slang in gay subculture until the late 1960s. Paul Baker in Polari: The Lost Language of Gay Men writes ‘Polari flourished in the repressive 1950s, where the regulation of post-war sexual morality was viewed as a priority, and prosecutions against gay men reached record levels.’ The play includes a song Contempery (sic)sung by Horace, a gay interior designer while the title song includes the line ‘poofs in coffee ‘ouses’

In the 1950s the police’s image was projected by BBC TV’s cosy Dixon of Dock Green, and it was not until 1963 that police corruption became public knowledge when Detective Sergeant Harold Challenor was charged with corruption offences at the Old Bailey: ‘Soho sounded like Chicago when Challenor described it, he believed that fighting crime in Soho was like trying to swim against a tide of sewage’ (James Morton Bent Coppers).

In Fings the ‘schpieler’ is handed over to the bent copper. Before the 1960 Betting and Gaming Act it was ‘fahsends of pounds passing across the baize’ but the Act legalised gambling in the UK, betting shops opened, and the government hoped to take gambling off the streets and end the practice of bookmakers sending ‘runners’ to collect from punters. The Act ‘knocked their street-based competitors out of business at a stroke, a lot of them found that the capital required to set up premises, pay staff and ‘go straight’ was beyond them’ (The Independent 5 April 2008).

In the 1950s there was concern about the visibility of prostitutes in London, and the Wolfenden Committee recommended a crackdown on street prostitution, and these were put into effect in the 1959 Street Offences Act: ‘It shall be an offence for a common prostitute to loiter or solicit in a street or public place for the purpose of prostitution.’ The song Fings Ain’t Wot They Used T’Be is Bart’s satirical ode to the good old days of unchecked prostitution: ‘I used to lead a lovely life of sin, dough! I charged a ton, now it’s become an undercover game… there used to be class doing the town, buying a bit of vice, and that’s when a brass couldn’t go down under the union price… I’ve got news for Wolfenden, Fings Ain’t Wot They Used T’Be.’ The Act forced the majority of prostitutes off the street. In Fings the prostitutes are skint. Helen J Self in History Repeating Itself: The Regulation of Prostitution and Trafficking writes ‘the essence of the scheme was not to abolish prostitution, but to push women off the streets… off-street outlets for prostitution multiplied … other unwelcome side-effects was an increase in kerb-crawling.’

The Socialist Standard of October 1957 wrote ‘the Committee’s aim is simply to brush the dirt under the carpet’ and ‘the real causes of prostitution are the economic and social conditions in which it lives and flourishes. It is, in fact, a product of the monogamous marriage system within the framework of buying-and-selling societies’ which reflects Marx and Engels view that ‘the bourgeois family finds its complement in public prostitution’ (Manifesto of the Communist Party). Lenin in an interview with Clara Zetkinargued that prostitutes are ‘victims of bourgeois society, accursed by two concepts; firstly of its accursed system of property and secondly of its accursed moral hypocrisy’ (The Women’s Question).

The English Collective of Prostitutes established in 1975 seeks the decriminalisation of prostitution which is supported by trade unions such as the CWU and GMB, but ‘sex work’ has divided the trade union movement. In 2009 the TUC Women’s Congress voted against the decriminalisation of the sex industry and the unionisation of sex workers. The 2009 Policing and Crime Act, by targeting brothels for raids drove prostitution further underground, increasing the vulnerability of sex workers, and preventing women from reporting violence.

Fings concerns Rosie, an innocent young woman on the run from a violent partner, who goes on the game. Bart’s Where Do the Little Birds Go, and The Ceiling’s Coming Dahn are ‘two of the best songs written for women in post-war English musical theatre’ and makes Bart ‘the uncrowned King of composing the English Whore’s lament: give him a brass, and he’ll expose the pain and doubt and fear and love in her’ (The London Bluebird, 30 August 2012).