‘The 1% and the Rest of Us – A Political Economy of Dominant Ownership’, by Tim Di Muzio. Zed Books. 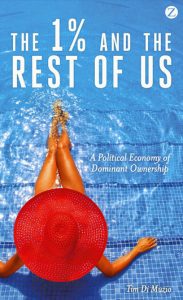 This is a curate’s egg.  The historical parts are good as is the definition of ‘the 1%’ as the dominant owners of income-yielding assets. Even ‘capital as power’, as an alternative to the concepts of capital as physical instruments of production (orthodox economics) and of capital as accumulated surplus value (Marx), has some descriptive merit.  Capitalist firms can be seen as trying ‘to redistribute more money to themselves than their counterparts, who are trying to do the same thing.’  Which means that all capitalist firms are in effect competing against each other for profits not against just those in the same branch of activity.

But the bad part is really bad. Di Muzio has swallowed hook, line and sinker the view that banks literally create money ‘out of thin air’, a phrase he repeatedly uses.  We are asked to believe that, when banks make a loan it is not out of money they have or can acquire, they just create it out of nothing and then charge interest on it. He offers this as an explanation as to why prices keep rising since, according to him, when a business has taken out a loan from a bank it has to increase the price of what it is selling to cover the interest it has to pay the bank. He also thinks that because ‘there is not enough money in the economy for workers to purchase goods and services they produce, there is a constant demand for interest-bearing credit’. But, as we always point out when confronted with such ‘underconsumptionist’ views, what the workers can’t buy the capitalists can or could.

This is the purest currency crankism in its crudest form, which not even Positive Money (who he mentions favourably) subscribes to. He even proudly boasts that this is what he teaches his students at the University of Wollongong in Australia who start their course thinking (correctly, in fact) that banks can’t lend more than they have or can acquire. His only saving grace on this is a passage in which he writes that ‘it is unclear whether Marx understood’ that banks create money out of thin air. Well, for the record, Marx did not make that mistake.

Logically with his views, Di Muzio lists as the most important demand that ‘the party of the 99%’ he envisages (not a bad idea in itself) is ‘monetary reform’ to replace ‘money as debt’ by a government bank simply printing money as ‘democratically decided’ is needed.  An unnecessary and worthless reform as well as a harmful diversion from what such a party should really aim at: the expropriation of the 1% and the rest of the owning class by making the Earth’s resources the common heritage of all humanity.

‘A Rebel’s Guide to Eleanor Marx’, by Siobhan Brown. Bookmarks. 2015

Although marred by the littering of ‘fightbacks’ and ‘downturns’ characteristic of SWP publications, this is not fundamentally a bad booklet. The contribution of Eleanor Marx to the class struggle is satisfactorily documented, both intellectually through her work on women – identifying  socialism as the way to ‘woman’s emancipation’ solution – and practically through her role as a firebrand activist in the New Unionism of the 1880s. Eleanor was not just the daughter of her father but a player in her own right – indeed her union interventions put his own ineffective fumblings in the First International to shame. The boring intricacies of her personal life are, in the main, sensibly avoided.

Little potted biographies of this nature have a valuable educative function regardless of the dubious politics of the issuing organisation. It is a little jarring, however, to be lectured on the undoubted usefulness of trade union organisation, the inefficacy of reformism and the patronising leadership attitude (of Hyndman) by a party characterised by non-industrial, primarily student, recruitment, hugely reformist sensibilities and a thoroughly authoritarian constitution. In the wake of the Comrade Delta scandal, perhaps the most notable thing about the ‘Rebel’s Guide’ series is the attention paid to ‘The Woman Question’. Four of the six in the range have female authors and half are about famous women or women’s issues. Whether there really was any truth behind the allegations or no, there is nothing like putting up a smoke screen.