The Class Struggle in Cambodia 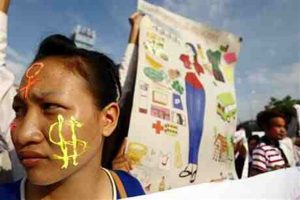 In some parts of the world workers are still being shot down for asking for higher wages.

During 2013 in Cambodia (the Khmer name is Kampuchea), the Khmer working class – particularly the half million garment factory workers – were active in the class struggle between capital and labour, clashing with the authoritarian government of Hun Sen and the repressive forces of the Cambodian police and military. The resistance of the garment factory workers to the downward economic pressures of the capitalist class culminated after a two week national strike in the New Year of 2014 with four workers killed and twenty seven injured when police and a deployment of an elite unit of soldiers, Special Command Unit 911 opened fire with AK-47s into a group of workers.

The workers’ economic struggle has become allied with the protest movement for liberalism and bourgeois democracy in Cambodia which is associated with Sam Rainsy and his ‘Party of Rescuing the Nation.’ They allege electoral fraud in the July 2013 elections and claim they were cheated out of winning the election. This liberal political grouping have promised the garment factory workers their desired wage increase to $263 per month. In September 2013 20,000 workers including garment workers, students, civil servants, teachers, farmers, and Buddhist monks protesting against the government’s ‘rigging’ of the election clashed with police and one worker was killed and others injured.

Cambodia’s government has been described by Human Rights Watch’s Southeast Asian Director, David Roberts, as a ‘vaguely communist free-market state with a relatively authoritarian coalition ruling over a superficial democracy’ (Political Transition in Cambodia 1991-1999, Curzon Publishers, 2001) which is quite accurate except Cambodia has nothing to do with ‘communism’. Cambodia operates a capitalist market economy. It is notorious for corruption, ignoring human rights and suppressing political dissent. Hun Sen, a former Khmer Rouge soldier, has been Prime Minister since 1985 and is leader of the Cambodia People’s Party which is the renamed Kampuchea People’s Revolutionary Party which was the sole party in the People’s Republic of Kampuchea 1979-89 when Cambodia was occupied by the Vietnamese army. This Party had a Leninist ideology and Cambodia was run economically on Russian state capitalist lines. In the 1990s Hun Sen adopted free market capitalism, privatized state industries, and established private property rights.

During 2013 the Khmer working class have realised that their employers had contracted  their standard of living  at a time of increased productivity and profits in the garment industry. Strikes are necessary if the working class are to prevent themselves being driven into the ground by the never-satisfied demands of profit. The working class must organise to defend and improve wages and conditions of work or even just to keep pace with an inflationary standard of living.

The Garment Manufacturers Association of Cambodia estimates that over a quarter of working days in the last two years have been lost due to strikes. The garment industry supplying clothes and footwear mainly to the European and American markets represents the largest portion of Cambodia’s manufacturing sector, accounting for 80 percent of the country’s exports. The garment industry manufactures clothes for a huge range of British high street companies, including H&M, Gap, Marks and Spencer, Tesco and Levis. In 2012, the exports grew to $4.61 billion, up 8 percent over 2011, and in the period from January to November 2013 the garment industry made $5.1 billion, a 22 percent increase on 2012.

David Webb, Cambodian programme director at the Solidarity Centre said ‘Workers are, frankly, far more savvy than they get credit for, and can see these vast amounts of money being made off the backs of some of the poorest workers in the region and how little they get back in return’ (Guardian 16 December). A woman worker called Khmon is quoted saying ‘There is no work in the countryside, so I have to work in the factories. The factories don’t care about us. They pay us so little, work us so hard and throw us away when we cannot work for a moment’ (Guardian 16 December). On May Day 2013 a garment factory worker named Chao Sinoun told Radio Free Asia ‘The factory owner is exploiting my labour’ (Sonorng Khe for Radio Free Asia Khmer Service, 1 May).

The May Day rally in Phnom Penh saw 10,000 garment and footwear factory workers with teachers and civil servants demanding wage increases, retirement pensions, reduced petrol prices, and the arrest of the killers of trade union activist Chea Victea in 2004. The same month saw two workers killed in a factory collapse at Wing Star Shoes owned by a Taiwanese company who make running shoes for Asics. A wage protest at a Nike Factory run by Sabrina Garment Manufacturing in the Kampang Speu province, west of Phnom Penh, involved 3,000 workers mostly women. They were seeking a $14 pay rise to cover transport, rent and healthcare on top of the $74 minimum wage but were attacked by riot police with stun batons and 23 workers were injured.

The minimum wage per month was increased in May 2013 from $60 to $75 a month plus $5 living allowance but the increase was swallowed up in rent increases and other expenses of living in the capital city such as inflation, rent increases, and job insecurity. The value of labour power may change because the values of the necessities the worker and their family consume has changed. If their value increased, then a wage increase would merely restore the position and allow the workers to consume the same amount.

Race to the bottom

Cambodia’s garment industry continues to grow rapidly which can be attributed to the country’s open economic policy which has drawn large amounts of foreign investment into this sector of the economy. Nearly 80 percent of the garment factories are owned by Chinese, Taiwanese and South Korean companies with only 5 percent owned by the Cambodian capitalist class. The capitalist class say the onus was on Western clothing chains to pay more for the garments they were buying from Cambodia’s factories. Ken Loo, Secretary-General of the Garment Manufacturers Association of Cambodia said ‘The garment industry is a footloose industry, it is not difficult for any investor to uproot and move its investment elsewhere. In Cambodia the industry is made up of predominantly foreign investors. If investors decide to relocate, there would be no local factories that would rise to take these places. We do not own the brand of the items we are producing so our profits are determined by the brands and retailers who place orders with us, they have the ability and the finances to increase the minimum wage, not us. The focus has to be on the brands and retailers to start paying factories more, so that in return we have the ability to pay our workers more’ (Guardian 16 December).

After the killing of workers in the New Year the Cambodian police forced 1,000 workers from their rally camp in Phnom Penh, and banned any further protests against the government. The State Prosecutors issued warrants for Sam Rainsy and his deputy to appear in court on 14 January on charges of inciting social unrest. On 7 January thousands of garment workers returned to work after the two week national strike. The strikes cost the garment industry approximately $20 million in lost revenue, and orders could decline by 20 to 30 percent in 2014. Sam Rainsy said ‘Now we are working on the diplomatic front, on the commercial front, on the legal front. We are in touch with unions and workers’ organisations all over the world to condemn violence on workers and to help workers to achieve the minimum wage’ (Morning Star 8 January).

The close relations of the trade unions in Cambodia with this liberal party led by Rainsy is effectively a non-revolutionary approach for the Khmer working class. The Cambodian trade unions should not depart from the principle of an antagonism of interests between the working class and the capitalist class. When they collaborate with the capitalist class, the state or political parties such as the National Rescue Party they are departing from this principle. As well as campaigning for an increase in the minimum wage the garment workers trade unions should aim for the ‘Abolition of the wages system.’

The Khmer garment factory worker Khmon said ‘The poor are always unlucky’ (Guardian 16 December 2013) but, as our comrades in the Socialist Party of Canada have pointed out, there is a way-out for the trap the working class in Cambodia find themselves in:

‘The capitalist apologists have a hard time explaining the nineteenth century wage rates and conditions that capital is flocking to. Isn’t capitalism supposed to bring widespread prosperity? If there is something lower, capital will flow there naturally like water flowing downhill. China is outsourcing its clothing orders to Bangladesh. If Cambodia can’t get lower than Bangladesh in wages, conditions of work, labour and safety legislation, etc, you are out of luck. There are always greener pastures for capital, until, that is, we, the workers wake up and make all property and the resources therein the common heritage of all mankind’ (The Socialist Party of Canada Secretary’s Reports for November 1 and December 1, 2013).