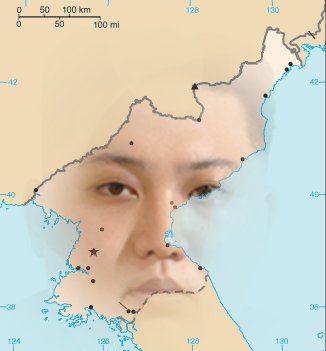 It is hard to tell what is real in the ongoing Korean ‘crisis’ and what is contrived. Up to a point – after all, it is in no one’s interest to frighten the markets too badly – it suits both sides to foster a sense of crisis. For Kim Jong-un and his generals a crisis atmosphere is a way to exert pressure for full admission to the nuclear club. For the American rulers and their allies it is also a way to exert pressure – and push North Korea firmly out of the club.

Of course, a good external scare always comes in handy on the domestic front, especially at times when mass misery might otherwise fuel rebellion. It provides an excuse for deteriorating conditions of life, redirects discontent outward and rallies the populace around national leaders.

It seemed for a brief period that the crisis was a real one, but by mid-April the real crisis seemed to be over. Inside North Korea the mobilisation of reserves, air-raid drills and other war preparations were suspended. The focus of mass propaganda switched back to the usual choreographic displays and routine matters like the annual spring drive to collect manure.

Yet only a few days previously, US and South Korean officials were warning that medium-range missiles had been deployed along North Korea’s eastern coast, with ‘a very high probability’ of their imminent launch against US forces in Japan (or, just conceivably, Guam). A North Korean official announced that missiles had been placed on standby and target coordinates set for their warheads.

A torrent of threats?

The sense of crisis, however, is fuelled mainly by what Fox News called ‘a torrent of warlike threats’ from North Korean officials. True, the most alarming of these ‘threats’ are pure make-believe, given that North Korea has no delivery vehicle capable of reaching the US mainland. Moreover, media reports hardly ever reveal that the ‘threats’ are in fact warnings of what North Korea will do ‘in the event of US aggression.’ ‘Patriotic Americans’ are expected to regard the term ‘US aggression’ as a piece of gibberish and pooh-pooh the very idea that any country might genuinely fear an American assault. As if the peace-loving United States has ever attacked anyone!

Whatever ulterior motives the young emperor may have for inculcating fear in his subjects, it does not follow that he is not afraid or that his fear is unreasonable. Anxiety would be an understandable reaction to the movements of US air and sea forces near North Korean borders, especially the flights of nuclear-capable bombers and stealth jets. He and his advisers know how the US used the issue of nuclear non-proliferation to justify its invasion of Iraq and a contemplated invasion of Iran.

Use them or lose them

Even in purely military terms, North Korea is by far the weaker party in the confrontation. Despite a large army, its forces are no match for an opposing coalition made up of South Korea, the United States and Japan (it can no longer count on support from China). This in itself makes the deliberate initiation of large-scale hostilities by North Korea extremely unlikely. On the contrary, the vulnerability of its few strategic weapons exposes it to the danger of a successful counterforce first strike.

Here lies the real danger. Facing the perceived dilemma of ‘use them or lose them’, North Korea’s leaders switched to a strategy of pre-emption. This means that they resolved to launch their missiles as soon as they determined that the adversary had begun preparations for an attack. But such a determination might be mistaken, especially when made by people already keyed up in anticipation – because, for example, they suspect (as North Korean strategists say they do) that South Korea and the US will use the joint military exercises they conduct each spring as cover for a real attack.

The sense of vulnerability that makes a North Korean pre-emptive strike possible has economic and political as well as military roots.

In recent years the leaders have partly lost control of the economy and been forced to tolerate a vast expansion of formally illegal internal trade and the emergence of a new group of wealthy black-market operators who potentially pose a political challenge. It is now widely assumed that collapse of the regime and unification of Korea are only a matter of time.

Another economic blow is the new sanctions imposed by United Nations Security Council Resolution 2094, designed to block ‘financial transactions and bulk cash transfers in support of illicit activities.’ This does not refer solely to trade in uranium and nuclear components. Other ‘illicit activities’, organised by a special bureau of the party Central Committee, include uranium sales, the counterfeiting of US dollars and the manufacture of methamphetamine and heroin for export (an estimated third of collective farm land is sown with poppies). Besides funding military programmes, the proceeds fill the personal bank accounts held by top officials abroad.

However, the wealth of the North Korean leaders cannot be measured in money. They also enjoy enormous non-monetary privileges. The dynastic family possesses palatial villas in a series of scenic locations, staffed by numerous guards, servants and entertainers. At the same time, hundreds of thousands rot in the labour camps and millions struggle on the verge of starvation. And yet, to our great regret, this system –  marked by inequality perhaps even more extreme than that of the US – masquerades under the name of socialism!