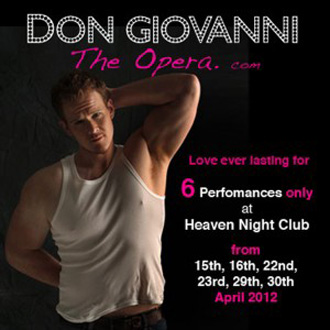 Mozart’s opera, Don Giovanni, is set in London in 1987 with a modern libretto by Ranjit Bolt.  It was recently produced at the gay nightclub, Heaven in London. Bolt’s libretto has gay philanderer, Don, sung by baritone Duncan Rock but the rest of the cast has been reversed: basses and tenors become sopranos and vice versa.

Mozart represents the rationalist enlightenment when the bourgeois classes were wrestling power from the feudal masters of the ancien regime in 1789.  His opera, Marriage of Figaro, portrays the servile classes as good as their masters. Mozart himself was a servant to an Archbishop and the Hapsburg Emperor.

Bolt’s Don is both a feudal master with droit de seigneur and a greedy Thatcherite capitalist.  The supernatural apparition of Il Commandatore at the denouement does not have its horror-effect because the character appears like Miss Havisham from Dickens and elicits laughter from the audience.  AIDS as a Faustian metaphor is not pursued in the libretto. This is a pity because Forman and Schafer in the 1984 film, Amadeus, successfully incorporated the dark elements of Don Giovanni into the tale of the Mozart and Salieri intrigue. The aria, Il catalogo e questo, is very funny and appreciated by the audience.

In 1987 there was a palpable sense of the smell of Weimar in Britain when Thatcher won a third election victory: capitalism had been unfettered, the nationalised industries sold-off and the working class beaten down with the end of the miners’ strike.  Increased powers had been given to the police, and a Tory MP had declared on the Channel 4 programme, After Dark: Tomorrow Belongs to Us, evoking the brown shirts of Cabaret-era Berlin. Capitalism had one of its periodic crises when the stock market crashed on Black Monday. There was AIDS, and the frenzied voices of the petite bourgeois were heard in the newspapers, the Tory Party, the House of Lords, and the Police. There was talk of re-criminalising homosexuality. The Government introduced Clause 28, prohibiting the promotion of homosexuality; 30,000 marched against it and “Lesbians invade the Lords and the BBC” screamed the tabloids.

Gay rights are subject to the whim of reformist politics and moral re-armament revivals in capitalist society, as can be seen from events in 1987.  And even as recently as May 2012, in North Carolina, gay marriage has been prohibited.  This is a contradiction of capitalism: it allows gay identity to develop but still needs the working class to reproduce.  The family therefore has to be prioritised and homophobia is an inevitable by-product.  Engels identified that oppression begins with the family and the rise of class society, and thus the oppression of women and gays has its origin in class society. With the end of capitalism, the bourgeois family will vanish and, as Engels wrote: “the traditional bonds of sexual relations, like all fetters, are shaken off”. With the transformation to a socialist society all humanity will be emancipated and there will be an end to exploitation and oppression.