Material World: Famine in the Horn of Africa… Again 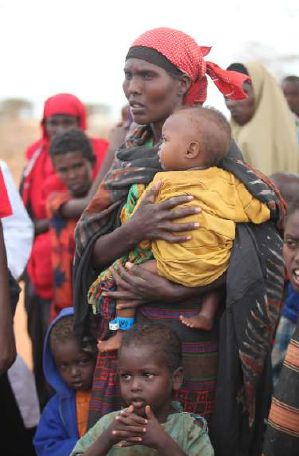 Although the current drought conditions are affecting a wide area in the Horn of Africa including Kenya and Ethiopia, the main media focus has once again fallen on Somalia, a country with a complicated and turbulent colonial history. The story is always the same: following a devastating drought there is a famine; the problem is not lack of food but lack of the ability to pay for food or lack of access to land to grow it. The world is stockpiled with food but giving it away would negatively affect the market.

This time around we hear that 3.5 million Somalis and 12 million Ethiopians within the drought region are under threat of starvation. Droughts are not new to the region, they are a regularly occurring phenomenon, but with the UN Famine Early Warning System in place for a number of years now, expectations would surely have increased for improved handling of the situation. Warnings did go out early this year predicting starving millions in the south of Ethiopia but the regime continued with its policy of selling and leasing great swathes of land to other countries to grow crops for foreign consumption. Last year 10,000 tons of rice were exported to Saudi Arabia alone.

Thomas Mountain, a US journalist who has lived in Eritrea since 2006, comments that while southern Ethiopians are suffering the worst drought and famine for 60 years those in the north are hungry because of ‘near record high food prices.’ This he contrasts with what is happening in neighbouring Eritrea, which is a result of totally different governmental policies. Here, within a handful of years, a move from rain-fed crops to a micro dam-fed irrigation system has led to better, more secure crops and dramatically falling prices of staple grains. According to the World Bank, life-expectancy improvements are ‘dramatic’ and Eritrea is one of the countries which will meet the Millennium Development Goals especially in the areas of children’s health, malaria mortality prevention and AIDS reduction. (http://www.countercurrents.org/mountain050811.htm)

News coverage of unfolding events in the area is patchy and can be biased according to allegiances or contracts of employment. Reports of facts on the ground are often distorted, depending on who’s pulling the strings. Currently Eritrea is a ‘state sponsor of terror’ according to Hillary Clinton who claims it supplies weapons to Al-Shabaab in Somalia. As a result, the media can say nothing positive about it.

Without doubt, the ongoing civil war in Somalia is exacerbating the crisis affecting so many of its people. The most problematic areas of Somalia for needy recipients of food aid are controlled by Al-Shabaab, a ‘rebel organisation with links to Al Qaeda’, which is unwilling to allow a number of food-aid agencies access for fear they are infiltrated by the CIA. The CIA is working closely with the official Somalian central government in Mogadishu, a government widely recognised to be in control of only a portion of the country. For a map of the current state of affairs of the conflict in Somalia see this web address: http://en.wikipedia.org/wiki/File:Fedmap4.png

The whole of this region has suffered long and hard throughout its colonial history and is continuing to suffer as colonial powers attempt to subjugate regimes or leaders of regimes in pursuit of profit through the exploitation of natural resources and land accumulation. As explained succinctly in the article ‘Africa, starvation and speculation’ in last month’s Socialist Standard, the small elites in control of natural resources are only too happy to profit personally while exposing millions to penury and starvation by driving them from their land through international land deals. Different regions of the Horn of Africa are affected in different ways by the diverse conditions on the ground – but whichever way the story is spun, the competition for profit and accumulation underlies the neglect of the population’s needs.

Droughts are a well-known fact of life in a number of regions of the world and will continue to affect this region of Africa. Forecasts predict they will become more severe as problems with climate change increase. But it is not inevitable that there should be famine after drought. Famine results from the denial of land, placing restrictions of the free movement of populations, treating food as commodities and the growing commercialisation of agriculture, especially for export. All this is compounded by bad planning, inadequate water storage and management, poor infrastructure and logistical organisation. Socialism could not prevent natural events such as lack of rainfall (but it could prevent droughts by an adequate infrastructure) but in those circumstances, no one would starve as food would simply be released from warehouses or transported from other parts of the world.