The Craziest Border in the World 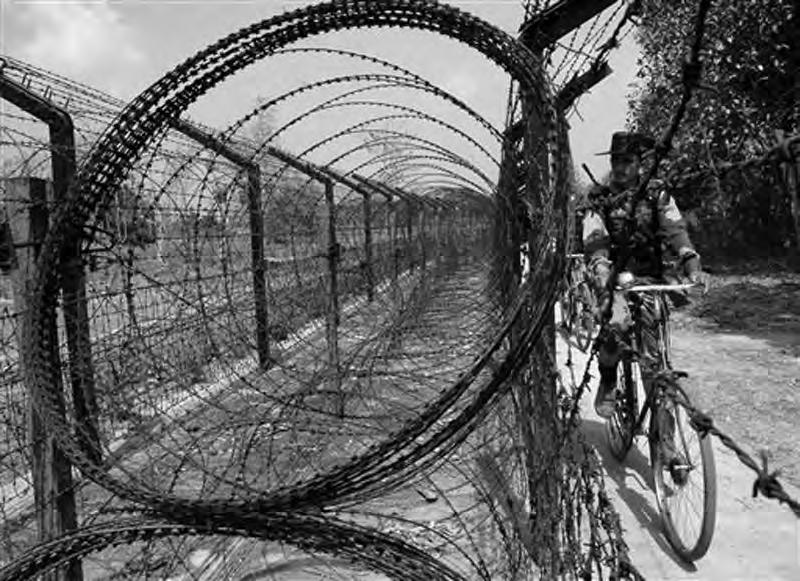 All borders are mad – it goes with the territory – but perhaps the world’s craziest border is that between India and Bangladesh.

The very existence of the border is itself an act of madness, even in nationalist terms. This can best be seen on the western section of the border. On the Bangladeshi side of the border, Bengali speaking farmers tend their crops. Whilst on the Indian side of the border Bengali speaking farmers tend their crops! Linguistically, ethnically and culturally the people of Indian West Bengal and Bangladeshi East Bengal are identical, differing only in religion. The Islamic religion forms the sole basis of Bangladeshi nationalism, the state’s only reason for existence, the only reason for the existence of the border. Nationalism based on religion is a lie compounded by falsehood: the lie of the mythical nation overriding all real class interests; the childish falsehood of the big man in the sky. In any case, neither Bangladesh nor India are religiously homogenous – around one fifth of the population of Bangladesh are Hindu, despite years of oppression, and a similar proportion of Indians are Muslim – making India the world’s third largest Islamic country.
The line of division between India and Bangladesh has its origins in the 1947 carve up of Imperial India. East Pakistan, as Bangladesh was known until 1971, was constructed in great haste from the districts of the Province of Bengal with a Muslim majority. Whilst West Pakistan (current Pakistan) had a reasonably coherent frontier – deserts, rivers and mountains – East Pakistan was an amorphous blob with no clear geographical divide. The border line is, to say the least, wiggly. 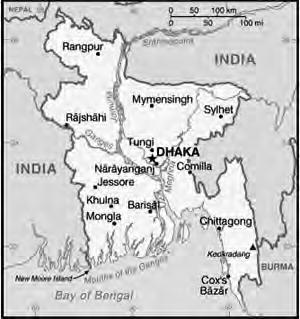 Within the enclaves, known locally as Chitmahals, life is not pleasant. With the exception of one or two of the larger territories which have always been reasonably well organised, the fragments are outside the state system, their 70,000 inhabitants, known as the Nowhere People, effectively abandoned. Censuses are not taken, electoral rolls not made up and taxes not collected. There are no proper roads, no hospitals, schools and police force. The enclaves are hives of ignorance, poverty and lawlessness, their inhabitants robbed, raped and murdered with impunity, a poor life experience even in terms of the rural subcontinent. Without a visa inhabitants cannot legally cross the border to go to school, hospital or market. However since they cannot obtain a visa without visiting the ‘mainland’, residents are effectively prisoners within their tiny fragments of land. The Latin root of the word enclave, inclavatus, meaning shut in or locked up, is indeed appropriate.
An additional 50,000 former inhabitants of the Indian Chitmahals are resident in India proper. Some left during or immediately after the 1965 Indo-Pakistan war, but most have fled during the last decade as community relations have deteriorated. These individuals are in a particularly poor plight, being recognised neither as Indian citizens nor as refugees and thus not being entitled to national benefits, such as they are, or international relief efforts.
The enclaves date back to a treaty of 1713 between the Maharaja of Cooch Behar and the Mughal Empire (the latter was taken over by the British in 1765 but Cooch Behar endured until 1949, one of the last princely states to cede to India). In Raj days, the existence of the enclaves was a mere matter of land ownership since there were no trade barriers and the enclaves were economically self-sufficient in any case. Only with the post-colonial carve up, did the Cooch Behar enclaves become at all significant. A territorial exchange was first proposed in 1958, and agreed by a 1974 treaty between India and Bangladesh however this was not ratified by India, which had most to lose and was hobbled by an unstable political situation. Recently the position of the largest enclave, Dahagram-Angarpota, has been improved by the creation of the Teen Bigha corridor, a neck of land transferred from India to Bangladesh in 1992. Access however is only permitted during daylight hours.
Economically the effect of the division has been devastating. The border cut the great metropolis of Calcutta from its eastern hinterland, no mean factor in that city’s decline, and elevated the minor provincial town of Dacca to capital status. India’s highly productive north east was left isolated from the rest of the state – the rail link between Calcutta and Assam was severed in four places and not restored until a quarter of a century later. Particularly affected by the dislocation has been the area on the eastern section currently known as Tripura. Tripura has a 856 km border with Bangladesh but is linked to the Indian mainland only by a neck of land which narrows down to a mere 60 km wide. Illegal trade in this area alone amounts to some $1.5 billion per annum – a tidy sum of duty lost to the governments concerned. Across the whole border around 100 people per year lose their lives mostly due to anti-smuggling actions – the Indian Border Security Force in particular has a tendency to shoot first and ask questions later.
In the last ten years, the Indian government has been erecting a fence along the border. The chain link construction topped with barbed wire stands 3.6 metres high and, with 3406 km authorised, will be by far the longest enclosed border in the world. This is a mighty construction task running from the mangrove swamps of the south, through rich farming land to the forests and mountains of the north. Approximately 50,000 people have been made homeless by the erection of the fence. Although the suppression of terrorism is a stated aim (United Liberation Front of Assam rebels and various Islamist groups use Bangladesh and India respectively as safe havens), smuggling is a more important motive.
Immigration too is a factor in the erection of the fence. Poverty stricken Bangladeshis are migrating in droves to the newly developing lands of northeast India – it is estimated that there are around 20 million Bangladeshis illegally resident in India. Goaded by aspiring political leaders, the Assamese are particularly wary of being ‘swamped’ by migrant Banglas and have exerted considerable pressure to ‘stem the tide’.
The erection of the barrier has not been unchallenged. In places, the construction runs close to or on the border, contrary to a 1974 treaty between Bangladesh and India which banned building in the proximity of the border. This has led to clashes between the Bangladesh Rifles and India’s Border Security Force with casualties inflicted on both sides.
A subcontinental Common Market between India and Bangladesh has been proposed and this would indeed make a certain degree of sense. However the degree of political ill-will makes an end to the division unlikely in the near future. Socialists are often reviled for their unrealistic utopianism in opposing ‘natural’ national divisions. Only by individual case studies can we find out how unnatural and insane such national divisions really are.
Kaz.