Oil and the Rest

There are three main themes in this book: the relation of oil to the US invasion of Iraq, the plight of American workers, and the way in which US elections are manipulated. Despite its American emphasis, it’s well worth a read.

It is hardly original to claim that the Iraqi invasion was due to US concerns over oil supplies. Palast, however, goes much further than this and argues that there were two conflicting views within the American ruling class. The neo-conservatives wanted to sell Iraq’s oil fields to various private companies, leading to a massive increase in production. This flooding of the market would undermine OPEC, which operates by imposing production limits, and so bring Saudi Arabia to its knees. In contrast, the big American oil companies opposed a sell-off and wanted the oil to be owned by the Iraqi state. That would make it straightforward to restrict production and keep prices high, thus boosting their profits and the value of their own reserves. The invasion, then, would not be about gaining access to Iraqi oil but about controlling the world price of oil (which was difficult with the unpredictable Saddam in power). Palast argues that Big Oil and their State Department allies eventually won the day — the price of oil now would seem to back this up.

Domestically, American capitalism is becoming more and more unequal. One percent of US households own 53 percent of all shares in the stock market. Median wages have gone down by 4 percent under Bush, but the bottom fifth of earners have lost no less than 20 percent of their income. Between 2000 and 2006 output per worker in America went up by nearly one fifth, but workers get less and less of what they produce. Nearly three million are no longer entitled to overtime at time-and-a-half after working forty hours a week. Modern-day capitalism needs a certain number of highly-educated workers, but the rest need to be identified early so that little money is wasted on ‘educating’ them.

Lastly, attacks on the electoral system go well beyond the ‘hanging chads’ of the 2000 presidential election. Palast presents evidence that both then and in 2004 many votes were simply not counted or wrongly rejected as spoiled. Electronic voting machines often don’t work properly, and they exclude the possibility of recounts. Voting machines were removed from many areas likely to vote Democrat, leading to huge queues at voting stations. And many potential voters have been unable to register, perhaps because they are wrongly claimed to have a criminal record or have no authentic ID. Less than half of Americans earning below $15,000 a year are now eligible to vote, and generally poor, black and Hispanic would-be voters are given a hard time in both registering to vote and having their vote recorded.

It might be interesting to reflect on whether these last points have any implications for the idea of using the electoral system to demonstrate the existence of overwhelming support for Socialism when the time comes.

The author of ‘No Logo’ has written another book strongly criticising features of capitalism while still arguing for reform of the system rather than for its replacement. In her earlier book Naomi Klein concentrated on the spread of globalisation. In ‘The Shock Doctrine’ she aims to show that disaster capitalism treats natural and man-made disasters as exciting market opportunities.

She illustrates the main theme and associated sub-themes of the book by events in various countries over the last few decades.

In the USA the attack on the Twin Towers and the Pentagon that came to be known as 9/11 resulted in some 3,000 deaths. It also led to Bush’s War on Terror, featuring big strides in privatisation, notably of the security industry. 9/11 exposed the security failures resulting from outsourcing government functions to profit-driven corporations: “the Bush team devised a new role for government, one in which the role of the state was not to provide security but to produce it at market prices.”

After the New Orleans flood disaster in 2005 the public school system was almost completely replaced by privately-run charter schools. The teachers’ union was shredded, the teachers were fired, and only some were rehired at reduced salaries. “Katrina was not unforeseeable. It was the result of a political structure that subcontracts its responsibility to private contractors.”

In Chile in 1973 General Pinochet seized power by a coup d’état against the previously elected regime which was called “socialist” but was really welfare-state capitalism. Before the coup Chile’s US-trained economists had tried to introduce a policy of privatisation, deregulation and cuts to social spending peacefully. When that policy was democratically rejected the ruling class resorted to the use of force. Pinochet’s battle was one-sided: more than 3,200 disappeared or were executed, 80,000 were imprisoned and 200,000 fled the country. Government spending was cut by 25 percent, accompanied by a package of pro-business policies.

The Falklands war in 1982 was fought between Britain and Argentina over possession of some tiny islands off the Atlantic coast. It cost several hundred military lives. It also served to boost the reputation of Mrs Thatcher as the Iron Lady. She went into Churchillian battle mode: after defeating “the enemy without” the Argentine forces) she turned her attention to what she called “the enemy within” – the trade union movement and particularly the National Union of Mineworkers. Between 1984 and 1988 the Thatcher government privatised, among others, British Telecom, Gas, Airways, Airport Authority and Steel.

Klein takes 57 pages and quotes over 200 sources to analyse the complex, chaotic and profit-driven situation in Iraq. Here are some highlights:

“Develop the private sector, starting with the elimination of subsidies… investors could take 100 percent of the profits they made in Iraq out of the country, they would not be required to reinvest, and they would not be taxed… [the Iraq experiment] transformed the invasion, occupation and reconstruction into an exciting, fully privatized new market… BearingPoint, an offshoot of the major international accounting and consulting firm KPMG, was paid $240 million to build a ‘market-driven system’ in Iraq.” (pp342-8)

In 2005 a hugely destructive tsunami caused much loss of life, suffering and hardship for many people, especially in Sri Lanka. When the emergency subsided and fishing families returned to where their homes once stood, they were greeted by police who forbade them to rebuild. Hotels were encouraged to expand onto the valuable oceanfront where fishing people had lived and worked. An $80 million redevelopment project was to be financed by aid money raised in the names of the victims of the tsunami. Loans from the World Bank and IMF were offered in exchange for agreements to open the economy to privatisation and public-private partnerships.

Workers against the Bolsheviks 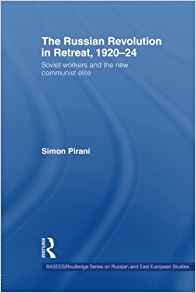 One of the consequences of the fall of state capitalism in the USSR at the beginning of the 90s has been the opening up of the archives of the old regime, including those of its secret police. This book is a fascinating study, based on the minutes of meetings of soviets and factory committees as well as police reports, of the fight put up by factory workers in Moscow in the period 1920-24 to defend their interests under, and at times against, the Bolshevik government. Pirani also describes the beginnings of the emergence of members of the Bolshevik Party as a new, privileged elite.

In 1920 and 1921 during the civil war and its immediate aftermath, conditions in Russia were dire. Workers were paid in kind, but the rations often arrived late and were sometimes reduced. This led to protests and strikes, which the Bolshevik government was prepared to accommodate as long as these were purely economic and did not challenge their rule. The government was particularly edgy in 1921 at the time of the Kronstadt Revolt, whose demands for free elections to the soviets and a relaxation of the ban on private trading, had the sympathy of many workers. In fact, in the still not entirely unfree elections, to the local soviets that year members of other parties (Mensheviks, Socialist-Revolutionaries, anarchists) and non-party militants made gains at the expense of the Bolsheviks. Pirani concentrates on these “non-partyists” who seemed to have been factory militants who wanted to concentrate on economic issues, but with an acute understanding of the balance of forces and what could extracted from the government.

In 1923 the government cracked down on the other parties, including their factory activists, and stopped them carrying out any open activity. Pirani notes that “no non-communist political organization worked openly in Moscow again until the end of the Soviet period”. The non-partyists survived a little longer while the Bolsheviks tried to co-opt them into their party. What political opposition there was was confined to dissident Bolsheviks, inside and outside the party, some of whom adopted a pro-working class stand over wages and conditions, but eventually they too were silenced and many of them joined the members of the other parties in the labour camps of Central Asia and Siberia.

Lenin’s attitude was typical of the one he had displayed twenty years earlier in his notorious pamphlet What Is To Be Done? : that workers were not to be trusted to know their own best interest; judging this had to be left to an intellectual elite organised as a vanguard party. Pirani summarises part of Lenin’s speech to the 11th Bolshevik Party Congress in 1921:

“Lenin argued that the Russian working class could not be regarded as properly proletarian. ‘Often when people say ‘workers’, they think that that means the factory proletariat. It certainly doesn’t’, he said. The working class that Marx had written about did not exist in Russia, Lenin claimed. ‘Wherever you look, those in the factories are not the proletariat, but casual elements of all kinds.’”

Pirani comments that “the practical consequence of this was that political decision-making had to be concentrated in the party”. This distinction between the actual working class (who cannot be trusted) and the “proletariat” (organised in a vanguard party who know best) has been inherited by all Leninist groups ever since and used to justify the dictatorship of the party over the working class.

Pirani’s book should be read by those who think, or who want to refute, that the state in Russia under the Bolsheviks could ever have been described as “workers”. The workers there always had to try to defend their wages and conditions against it, even in the time of Lenin and Trotsky.