Book Reviews: ‘No War But The Class War!’, & ‘Open World – the Truth About Globalisation’

No War But The Class War! Libertarian Anti-Militarism Then and Now. Edited by Anna Key. Kate Sharpley Library. 2003.

Some purchasers of this short, 20-page pamphlet might find it a bit of a con since, though it opposes militarism, it does not oppose violence. Far from it. It praises violence and advocates this as the way to confront the State. We ourselves are not pacifists, but we always make it clear that we think that Socialists should only contemplate resorting to violence reluctantly and as a last resort should an anti-socialist minority attempt to prevent by violent means the implementation of the democratically-expressed will of a majority for socialism. So you will find no glorification of violence—such as the talk of “armed joy” by the sick individual who wrote this pamphlet’s last contribution—in our literature.

The items in this collection of anti-militarist leaflets and articles start from an appeal to conscript soldiers in Spain in 1896 not to go and fight in Cuba to a leaflet against the recent war in Afghanistan. The contrast between the early and the later ones is striking, with the early ones coming from the heart in contrast to the more intellectual later ones. Not that the message in the earlier ones is that coherent or, frankly, sensible.

There are two contributions from the pre-WWI French anti-militarist militant, Gustave Hervé, who wrote a book called Leur Patrie (in English “Their Country”, but whose English version is called My Country Right or Wrong). One starts off well enough, excellently in fact:

“For anybody who is not satisfied with words, or anybody who wants to forget for a moment the fantastic definitions of the Country which have been taught him at school, a Country is a group of men living under the same laws; because they themselves or their ancestors have been brought willingly or by force, more often by force, to obey the same sovereign, the same government. Patriotism groups men according to their land of origin, as decided by the vicissitudes of history; within every country, thanks to the patriotic link, rich and poor unite against the foreigner. Socialism groups men, poor against rich, class against class, without taking into account the differences of race and language, and over and above the frontiers traced by history”.

But it then goes on to advocate, as the working-class response to the outbreak of war, an armed uprising to attempt to overthrow capitalist rule: “Insurrection rather than War!”

The early SPGB (since we were founded in 1904) was aware of Hervé views and commented on this particular slogan in the July 1907 issue of the Socialist Standard:

“Certainly no one country’s exploiters are so superior to the rest that the workers should sacrifice themselves in defending them; but it is equally certain that if the proletarians were to rise in armed revolt against their rulers immediately on the outbreak of war, while the master class controlled the armed forces of the nation, and while the workers were yet unable and unready to assume control of Society, they would be courting a shambles that would make war peace by contrast.”

“Since, therefore, Hervé’s statement implies that the workers even though they are not in a position to successfully emancipate themselves should nevertheless sacrifice themselves in a fruitless and bloody attempt to do so on the outbreak of war, it is necessary to dissent from that position of his declaration.”

“The particularly anti-militarist propaganda of Hervé has undeniably an educational value, and to that extent it is to be welcomed.”

It has to be added that, when the first world slaughter did break out in August 1914, Hervé rushed to join the French army to defend “their Country”, a fact referred to (but without naming him) in the next following article in the pamphlet: “the same man who had once proclaimed ‘insurrection rather than war’ now exhorts his comrades to defend the ‘civilization’ of the exploiters”.

Hervé later became a fascist. He wasn’t the only pre-WWI anti-militarist militant to take this road, the most notorious being Mussolini. The publishers of this pamphlet, with its talk of “armed joy” and “transforming life arm in hand”, might like to ponder whether the glorification of non-state violence is not in the fascist rather than the “libertarian” tradition.

There’s not much wrong with the slogan “No War but the Class War”. But there’s a lot wrong with “No War but Civil War” which is how this pamphlet interprets it.
Adam Buick

Open World: the Truth about Globalisation. By Philippe Legrain. Abacus £7.99. 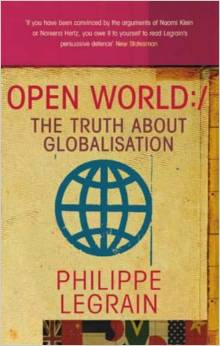 This book has been touted as the definitive response to the ‘anti-globalisation’ movement and writers such as George Monbiot and Naomi Klein (author of No Logo). Essentially, Legrain argues that globalisation is A Good Thing, delivering jobs and a better standard of living to poor countries and cheaper goods to the developed world. Coupled with free trade, and appropriate government action to prevent any unwanted side effects, it can benefit everyone.

Legrain begins by arguing that globalisation has not proceeded as far as many people may feel. For instance, three-quarters of the goods in British shops are made in the UK, and most people work for British companies; in the US, the corresponding figures are around 90 percent in both cases. He also has a genuinely useful chapter on the history of globalisation, suggesting that it was already well under way when the Industrial Revolution started.

But he then goes on to claim that workers in poor countries benefit from globalisation. In Vietnam, for instance, foreign-run factories pay around double the average local wage, and technology and management skills are transferred inwards. Yet sometimes he is astonishingly naive: he visits a Nike contract factory there, and describes it as “bright, airy, clean and safe”, but says nothing about the many other reports of low wages and appalling working conditions in sweatshops. He justifies the vast difference between what the workers earn per shoe ($2) and what the shoes sell for ($72) by noting all the other costs and the need for Nike to make a profit. In fact, this is his general argument: though he hardly uses the word “capitalism”, he is really defending globalisation as part of capitalism, and on the same grounds that capitalist supporters defend the profit system.

Nor, he claims, do brands really rule the world, as Naomi Klein implies. Rather, consumers hold the whip hand, as the brands have to cater to their whims. We still have a choice: if we don’t like Nike, we can buy Adidas (some choice!). Klein is described as virtually fascist for suggesting that ordinary people are manipulated into buying things they don’t really want, while she of course is intelligent enough to see through it all. It is true that people cannot be manipulated in any simplistic way, but they can certainly be influenced, which is why the global brands spend millions on advertising. Legrain also blithely ignores advertising to children, who are clearly far more manipulable than adults.

Equally, companies are supposedly not all-powerful, being at the beck and call of those who buy their products and call the shots. Some of Legrain’s arguments here are just plain silly. For instance, he states that Margaret Thatcher’s privatisation programme was introduced because she thought it made economic sense, “not because she was taking handouts from big business”. But capitalist politicians do what seems to be good for capitalism, and to suggest that such actions would only be taken if they were corrupt is missing the point completely.

Basically, Legrain’s book is a hymn to capitalism and to profit-making. If you think that capitalism is basically a nice, friendly system—though it may need a bit of adjustment from time to time—then it may well be logical to support its globalising aspect. After all, it means more customers, more profits. But the anti-capitalist or anti-globalisation movement, for all its confusions, is a sign that increasing numbers of people are rejecting the idea that profit is good for everyone and that a small number of parasites should control the Earth’s resources. Open World may make the capitalists and their supporters happy about what their system is doing to the world, but in truth it is no more convincing than any other attempt to defend the profit system.