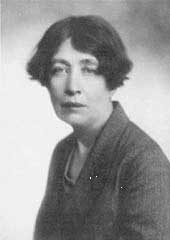 The Pankhurst name is mainly associated with the Suffragette Movement, as Christabel Pankhurst and her mother Emmeline (“Mrs Pankhurst”) were the most prominent leaders of the Votes for Women movement in the late 19th and early 20th century. Christabel’s younger sister, Sylvia (born 1882), was also involved in the suffrage campaigns, but in addition she came to adopt ideas and aims which are of more interest to those who advocate a socialist world.

The Pankhursts’ Women’s Social and Political Union (WSPU), formed in 1903, supported votes for women on the same basis as that which obtained for men at the time, i.e. based on a property qualification. Whatever its intention, given the situation where most property was held in the name of husbands rather than wives, this would have had the effect of enfranchising only a relatively small number of women, and clearly only rich women. Sylvia Pankhurst, however, came to support the more democratic position of general adult suffrage. Along with other suffragettes, she met many women from London’s East End while serving time in prison for suffragette activities, and was impressed by the courage these women showed in enduring the appalling prison conditions.

In 1912 she moved to the East End herself and became an early practitioner of a kind of “community politics”. Most men living there did not have the vote either, so the standard WSPU demand was of little local relevance. The East London Federation of the WSPU took on wider social concerns than just the vote, but Sylvia was expelled from the WSPU by her mother and sister, who could not tolerate any other source of power in the organisation. In 1914 she set up the East London Federation of the Suffragettes, with its paper the Woman’s Dreadnought, which she edited.

The ELFS supported adult suffrage, but also organised nurseries and cheap restaurants during the First World War, as well as defending workers of German origin who were attacked by jingoistic mobs. It was renamed the Workers’ Suffrage Federation in 1916, though this new name still failed to reflect its true range of interests, and the following year its paper became the Workers’ Dreadnought. The paper’s anti-war stance and its coverage of strikes earned it an influence far beyond the East End.

The Bolshevik Revolution in Russia had an enormous impact on Pankhurst and the WSF (as on the Left in general), and much of their energy was redirected towards defending the new state and opposing Allied intervention against it. The WSF name was modified to Workers’ Socialist Federation, and soviets or councils were now seen as the preferred means of organisation. Pankhurst proposed household soviets, so that “mothers and those who are organisers of the family life of the community” should be represented—a useful reminder that not everyone would be included in work-based bodies.

“From 1918 to 1921, the Workers’ Socialist Federation was a unique revolutionary organization. It challenged the male domination of socialist politics, for even though its all-female membership changed over time to admit men, women continued to be the major leaders and activists. The WSF campaigned on a whole range of women’s issues (such as women’s and children’s health care, schooling and domestic work) and also participated in workers’ struggles in the East End, as well as in struggles nationally and internationally” (Barbara Winslow: Sylvia Pankhurst: Sexual Politics and Political Activism).

As the examples show, though, these activities were reformist, not revolutionary.

Along with the Socialist Labour Party and the British Socialist Party, the WSF was one of the groups involved in the unity talks to set up the Communist Party of Great Britain. Having gone over to full-scale admiration for soviets, Pankhurst opposed the pro-parliamentary sections in the unity talks. She argued not just that parliament could not be used for “revolutionary” purposes (which was generally agreed), but that it could not be used by revolutionaries for any purpose. Accordingly, the WSF withdrew from the unity talks to form the strangely-named Communist Party (British Section of the Third International) in 1920. The aim of this move – widely condemned at the time as jumping the gun – was to persuade the British Left to adopt anti-parliamentarism and reject affiliation to the Labour Party.

Pankhurst’s stance was attacked by Lenin in the chapter on Britain in his “Left-Wing” Communism, an Infantile Disorder. He quoted Pankhurst as saying that the Communist Party must not compromise. Not so, said Lenin: it was essential to help the Labour leaders defeat the Tories and Liberals, so that workers should see the results of a Labour government. The cause of Communism, he went on, would be furthered, not betrayed, by calls for workers to vote Labour, as a Labour government would soon lead to disillusion. These ideas are purely opportunist and dishonest and, of course, the events foreseen by Lenin failed to materialise. But his views did foreshadow the compromises and lies that have been typical of Bolshevik groups.

Pankhurst and the CP(BSTI) were, however, convinced by Lenin’s arguments, and most of the organisation’s branches joined the new CPGB soon after it was founded, though she continued to produce the Workers’ Dreadnought as a separate paper. The “unified” CP, however, was anything but unified, and when the Dreadnought began publishing the views of oppositionists within Russia as well as arguing the anti-parliamentary line, the CPGB and their Moscow masters objected. In September 1921, once she had been released from a prison sentence for sedition, and had refused to hand the paper over to CP control, Pankhurst was expelled. She now set up the Communist Workers’ Party, which had the aim of abolishing the wages system, but this never amounted to anything much and it collapsed by 1924, when the Workers’ Dreadnought also ceased publication. Her later career is of little moment – she joined the Labour Party in 1948, and died in Ethiopia in 1960, after exposing Italy’s invasion of the country and becoming an admirer of Emperor Haile Selassie.

However, Pankhurst’s views for a time during the early twenties were of great interest. She could never be accused of consistency, but she did propagate the view that Socialism/Communism meant a moneyless, classless community, and that what was being built in Russia was capitalism, not any variety of socialism. She explicitly described the New Economic Policy, introduced there in 1921, as “reversion to capitalism”. And consider these extracts from her writings:

“Our aim is Communism. Communism is not an affair of party. It is a theory of life and social organisation. It is a life in which property is held in common; in which the community produces, by conscious aim, sufficient to supply the needs of all its members; in which there is no trading, money, wages, or any direct reward for services rendered” (1923).

“The Russian workers remain wage slaves, and very poor ones, working, not from free will, but under compulsion of economic need, and kept in their subordinate position by a State coercion which is more pronounced than in the countries where the workers have not recently shown their capacity to rebel with effect” (1924).

To the extent that the Left pay attention to Sylvia Pankhurst today, she is usually derided as a sectarian “ultra-leftist” who placed inflexibility and loyalty to her own organisation above the idea of unity. But she is better seen as someone who saw through the unprincipled and dishonest tactics of the Bolsheviks and their British followers, and who realised that Russia was not undergoing a transformation to Socialism. Her opposition to using parliament for revolutionary purposes was a mistake, caused by her overwhelming enthusiasm for the supposed successes of the soviets in Russia. She deserves, however, to be remembered as more than just an object of Lenin’s criticism.