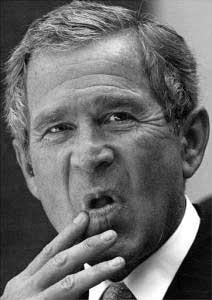 “Every day Saddam remains in power with chemical weapons, biological weapons, and the development of nuclear weapons is a day of danger for the United States.” Sen. Joseph Lieberman, September 4, 2002

“Intelligence gathered by this and other governments leaves no doubt that the Iraq regime continues to possess and conceal some of the most lethal weapons ever devised.” George Bush, March 18, 2003

“I have no doubt we’re going to find big stores of weapons of mass destruction.” Kenneth Adelman, US Defense Policy Board , March 23, 2003

“Saddam’s removal is necessary to eradicate the threat from his weapons of mass destruction.” Jack Straw, Foreign Secretary 2 April, 2003

“For bureaucratic reasons, we settled on one issue, weapons of mass destruction (as justification for invading Iraq) because it was the one reason everyone could agree on.” Paul Wolfowitz, May 28, 2003

In the months leading up to the US-led invasion of Iraq, the Bush-Blair regimes produced reams of documents to prove Iraq was stockpiling weapons of mass destruction and how Saddam could realistically fire them within 45 minutes. As they geared up for war they reiterated time and again that their intention was solely to rid Iraq of its WMD and make the world a more stable place for decent and god-fearing people to live in. They campaigned long and hard for their war – for the support of their peers in governments and for the backing of the US and British electorates and, convinced they had the mandate for war, invaded Iraq in March. Two months after the end of the fighting no “illegal” weapons have been found and the odds of finding any diminish greatly as the days go by.

The recent admission from a British security chief that the 50-page “intelligence” report on Iraq’s WMD presented by Tony Blair to Parliament on 24 September last year – and used as the Labour government’s evidence for Iraq’s illicit weapons inventory – was spiced up on the government’s instructions came as no real surprise for those who have scrutinised the unfolding of the US-UK war with Iraq and the Labour government’s desperation to be part of it. Since the transatlantic plan to invade Iraq was hatched it was apparent that Truth would again be the First Casualty of War.

For their part, the CIA and their British counterparts have tried to distance themselves from their respective governments these past few weeks, with unprecedented briefings and leaks to the press, desperate to avoid the backlash that has lead to some serious questioning in London and Washington.

On a visit to Poland on 30 May, Tony Blair told a press conference that finding the weapons in Iraq was “not the most urgent priority”. And yet, according to the claims of the dossier that he defends, Saddam Hussein “has a useable chemical and biological weapons capability” and that his “current military planning specifically envisages the use” of these weapons. For months we had the Blair government ramming the WMD issue down our throats, pleading for our support for his war with Saddam, who threatened the civilisation we cherished. Yet as Saddam and his military top brass, who presumably know about these WMD, which are yet to be found, are still on the run we are told that finding the weapons is not an urgent priority!

Also now discredited by the CIA is the evidence US Secretary of State Colin Powell eagerly displayed to the UN Security Council at the beginning of February. Powell provided explicit particulars of the key players in Iraq’s WMD programme as well as the sites that are now under US military control. Nevertheless, the biologically-armed “missile brigade”, which he claimed was situated outside Baghdad has proved to be a figment of his imagination and the weapons scientists he informed the world were afraid of talking because of Saddam’s reach have not yet disclosed any secrets. As with the alleged “poison camp” near Khurmal, its labyrinth of tunnels and complex chemical communication network, so too with the photos of twenty or so Baghdad-based al-Qa’ida members the UN was presented with. No evidence whatsoever.

In spite of every quality newspaper demanding answers from him in the wake of the secret services admission, Blair, it seemed, was learning nothing. Rather than running for cover he began blurting more lies, claiming that Iraq tried to purchase uranium from the African state of Niger. The documentary evidence this fresh allegation was based on has since been confirmed as forgery by the International Atomic Energy Authority. Indeed, the Bush administration was aware that this evidence was bogus a year earlier – something Colin Powell and Condoleezza Rice have since admitted. Moreover, early last year Vice President Dick Cheney sent a former US ambassador in Africa to Niger look into the story. Although the latter brought back word that the documents were not genuine, this was not sufficient to prevent the use of these documents as part of Bush’s rationale for the invasion of Iraq.

The sorry situation becomes more pathetic. US Secretary of Defence, Donald Rumsfeld has lately offered that the reason Saddam’s WMD can’t be found is because they were destroyed before the war started. In other words the US-Britain invaded Iraq to rid the region of weapons Saddam never had and indeed that Saddam claimed he never had and which the UN weapons inspectors suggested he never had. If this was the case, then Saddam could never have been in breach of the famous resolution 1441, which was the justification for war.

Critics might consider that in light of recent revelations Blair should resign and that Bush should be impeached. Surely politicians should not be allowed to lie like this! But hold on.

Lying is the trade of politicians under capitalism.

Back in 1925, Hitler wrote in Mein Kampf: “This broad mass of a nation . . . will more easily fall victim to a big lie than a small one.” Blair and Bush are fully aware of the power of the big lie, so little wonder they thought they could get away with it. Moreover they are fully aware their support base swallows lies every living moment of the day. For the workers’ part they are lied to from the cradle to the grave: at school with distortions of history and the myth about a God up above; in the workplace, as producers, lied to by their bosses and at home as consumers bombarded with the myths perpetuated by the advertising industry.

To be sure, the entire capitalist edifice depends for its continued survival on the promotion of lies, half truths and the distortion of facts. So powerful is the capitalist distortion machine that it takes all our powers of concentration, memory recall and skills of research just to separate the simplest of lies from fantasy. This constant digest of misinformation perhaps explains the amnesia the majority of workers appear to suffer from. And what is exasperating is that in spite of all the evidence revealing the architects of war to be the conniving and scheming rapscallions we always knew them to be, it is a fair bet that many workers will again be ready to believe their lies when Iran is found to be stockpiling WMD and harbouring al-Qaeda terrorists.

It may well be that WMD will be found in Iraq – but the assumption now will be that will have been planted there by corrupt Western regimes desperate to justify their invasion. And this evidence will likely be used not only to prop up the discredited Messrs Bush and Blair but also to malign the anti-war movement – which claimed this was a war for oil – and to further strengthen their case for a continuation of the “war on terror”.

In the months ahead be careful what you swallow.