Love of Money under attack 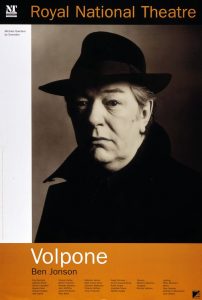 Playwrights of yesteryear who were anxious to pillory social attitudes and beliefs had to handle their criticisms carefully.

In 1597 Ben Jonson was imprisoned for three months for taking part in the “lewd and seditious” comedy The Isle of Dogs. Jonson clearly learnt his lesson. In his comic masterpieces, Every Man in His Humour, The Alchemist and Volpone—written at the turn of the century—his barbs and brickbats were more subtle if nonetheless devastating for all that.

Jonson believed that it was “the office of the comic poet to imitate justice and instruct in life”, and in Volpone, currently in repertoire in an exhilarating production at the National Theatre, his target is described in the programme as “the immorality if nascent (emergent) capitalism”. Jonson gives animal names to many of his characters—most of whom are prepared to lie, cheat and manipulate in order to further their interests—and their brutish behaviour starkly illustrates the depths to which humanity can plummet when self-interest and competition reign supreme.

Although it might seem superficially that love of money is under attack, it is very clear that Jonson is concerned with a more substantial target: beliefs and behaviours which are characteristic of capitalism and which, if their nature, make money the supreme goal. J. M. Keynes offers the revealing opinion that:

“The love of money as a possession—as distinguished from the love of money as a means to the enjoyments and realities of life—will be recognised for what it is, a somewhat disgusting morbidity, one of those semi-criminal, semi-pathological propensities which one hands over with a shudder to the specialists in mental disease.”

Keynes seems unaware that the love of money, as a token for capital, is the engine which drives society. To criticise people in a capitalist society for wanting money seems akin to complaining that carnivores like, and at the extreme will kill for, meat. Jonson understood this even if Keynes didn’t, but he is too discrete to say so directly. When a dramatist has been imprisoned for giving voice to his opinions it is perhaps understandable if, subsequently, he leaves it to the audience to read between the lines.

Socialists with an evening to spare will enjoy Jonson’s trenchant observations, the marvellous playing of a wonderful cast, and a production which drives the action forward at a helter-skelter pace across the wide expanses of the Olivier stage.