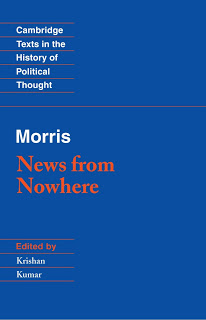 William Morris: News from Nowhere Edited by  Krishan Kumar.  Cambridge Texts in the  History of Political Thought. (ISBN 0521 42233 7 £12.95.)
This new edition of Morris’s classic socialist work is different in that it includes an index and footnotes. enabling it to be read as a text in the history of political thought.
For in addition to having, as Krishan Kumar puts it in his introduction, “good claims to be considered the best, certainly the most attractive utopia in English”, News from Nowhere is a work of political theory about the nature of socialism and the socialist revolution.
Socialism for Morris (for which he uses the alternative term “communism”) is a classless society of common ownership in which people relate to each other in a co-operative, democratic and non-hierarchical way without money or government. As to the socialist revolution. in Chapter 17 on “How The Change Came”, Morris describes a revolution in which the “Combined Workers” use their industrial strength to impose common ownership and workers’ management of industry on the ruling class and to overcome their violent resistance. It is what ten to fifteen years later (Morris was writing in 1890) would have been called a “syndicalist” conception of the revolution.
We don’t think this is entirely realistic in that it ignores the need, in order to minimise violence, to neutralise the State by winning political control (Morris later came to this conclusion too) but Morris’s theory is still worth studying as an alternative theory of democratic revolution (the Combined Workers enjoy majority support and are organised on a democratic basis) and one that rightly rejects both parliamentary gradualism and the seizure and exercise of power by a vanguard elite. But judge for yourself. Read (or re-read) the book.
Adam Buick