The Silent Conspiracy: Inside the Intelligence Services in the 1990s by Stephen Dorril. (Heinemann, London, £16.99.) 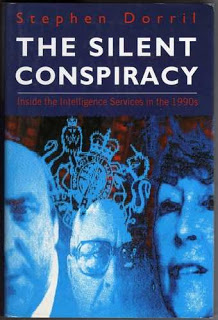 The existence, and function, of the modern state is accepted and not questioned by most people. Yet the state has not existed, in the words of Frederick Engels. “from all eternity”. There have been societies which have managed without it, “which have no notion of state power” (The Origin of the Family, Private Property and the State). The state came into existence with the emergence of class society.
The modern state, therefore, exists to facilitate the running of capitalist society as smoothly and efficiently as possible, and to look after and protect the interests, internally and externally, of the owners of capital—the capitalist class. Although at various times, and in varying degrees, in different countries, industries and means of transportation have been owned and run by the state (the nationalized industries), the central core of any modern state comprises the civil service, the armed forces and the police. Such organizations are there for all to see. But many of their functions, departments and offshoots remain secret, semi-secret and largely unaccountable. They are sometimes referred to as “the secret state”. This book deals in part, in some detail, with aspects of those parts of the modern state generally described as the security and intelligence services, largely in the 1980s and into the 1990s.
There are useful chapters on MI5, MI6 and the Government Communications Headquarters (GCHO). Spying on trade unionists and unions as well as organizations such as CND are discussed. With the collapse of the Soviet empire, and the subsequent decline of the Communist Party, more emphasis by the security service, as well as the so-called secret intelligence service, is now put on other “subversives” and “terrorists” within the United Kingdom, and industrial spying by foreign capitalist states, “friendly” or otherwise.
The Silent Conspiracy provides useful information for socialists, striving for a world of production for use and the satisfaction of needs, and shows how necessary it must be for a socialist majority to gain control of the state. The book demonstrates just how impossible it would be for “revolutionaries” to abolish the state by “smashing” it. A socialist majority would have to dismantle the repressive apparatus of the state and, obviously, close down such organizations as MI5. MI6 and GCHO. No doubt the buildings, computers—and their staffs—could be put to different use. And as quickly as possible after a socialist majority wins control of the State. Socialism would have no use for a coercive stale machine.
Peter E. Newell