What about pension rights?

Others have used a different set of figures to reach a different conclusion: those for the ownership of shares traded on the London Stock Exchange which show that only about 17 percent are now owned by private individuals (see graph). The rest are owned by commercial and financial institutions of one kind or another, in particular by insurance companies, pension funds, unit trusts and investment trusts or “institutional investors” as they are collectively known as. Since a large part of the funds of these institutions comes from small investors, the claim is made that these figures mean that the capitalist class now own only 17 percent of capital in Britain and even that the remaining 83 percent is owned by the working class. 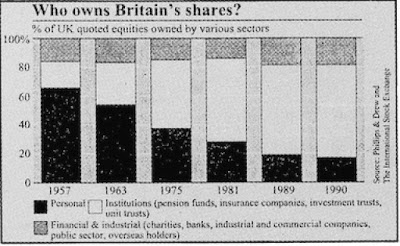 Whatever may be the significance of the decline of the private Stock Exchange investor—what it means is that the person of the capitalist has become even more redundant, not only to organising production but now also to the specifically capitalist function of finance, making it clear that what we are up against is an impersonal system—it does not alter the figures for the distribution of capital given in last month’s article.

Just because the rich no longer invest directly on the Stock Exchange to the extent that they used to does not mean that they don’t do so indirectly. They too have bank accounts. They too have insurance policies (Maxwell was reportedly insured for £20 million). They too resort to investment trusts. According to the Inland Revenue figures, those with £100,000 or more (not enough at the lower end, it is true, to be a real capitalist but still only 7 percent of the population) own not only 85 percent of company shares (not just the 17 percent mentioned above but also of those held via unit trusts and investment trusts), but also 47 percent of bank accounts and 47 percent of insurance policies as well as 81 percent of other financial assets (mainly government and local authority bonds) (see Table 1).

Money invested in insurance policies, personal pensions, unit trusts, banks and building societies is taken into account in the Inland Revenue statistics—and they show that those with £100,000 or more own 61 percent of all capital. The one exception is the money in pensions funds, but would this alter the figures and who does it belong to anyway?

Non-existent billions
The third set of figures—that incorporating state pension rights—is completely worthless. The government actuary has estimated the total value of state pension rights in 1988 to be £573 billion (Economic Trends, November 1991). As anybody who works or has worked acquires state pension rights this amount is assumed to be evenly divided amongst the adult population. So half, or £286.5 billion, is attributed to the bottom 50 percent. This is three times the total “marketable wealth” owned by this category and an average of £13.000 a person, so, by this simple device, increasing their average holding from £4000 to £17,000! Since only 1 percent of the total, or £5.73 billion, is added to the total wealth held by the top 1 percent, the overall effect is to considerably reduce the degree of inequality in the figures for the distribution of wealth. The share of the top 1 percent falls to 11 percent and that of the top 10 percent to 38 percent while that of the bottom 50 percent rises to 17 percent.
But this exercise is quite fraudulent. This figure of £573 billion—equal to more than a third of “marketable wealth”, which is wealth that really exists and is recorded in the first set of figures in Table 1—is purely fictitious. It has no real existence. There are no real assets “owned by the working class” and invested on the Stock Exchange that correspond to it. The figure is obtained by converting the flow of income represented by present and future state pensions into a notional lump sum. This is legitimate for some accounting purposes, but what is not legitimate is to go on to assume that this sum actually exists and to attribute it to individuals, in the event mostly workers, as part of their wealth.
State pensions in Britain are paid out of taxation. They are what the National Accounts statisticians call a “transfer payment”; someone else’s income is taxed and then transferred to state pensioners as their income. As taxes ultimately fall only on property incomes there are real capital assets somewhere which, through the exploitation of productive labour, yield the income out of which state pensions are paid. But these assets belong not to workers with state pension rights but to the rich property-owners on whom the taxes to pay the pensions fall.
The absurdity of converting a transfer payment into a notional capital sum and counting this as part of the wealth of the recipient can be seen when other transfer payments are given the same treatment. Income Support, for instance. It, too, could be converted into “wealth” and used to show that the poor are not really poor at all. In fact, since in many instances Income Support is higher than the basic state pension and since, being paid to people below pension age, it is payable over a longer period, the “wealth” which would be attributed to many on Income Support would be much greater than the extra £13,000 state pensioners are supposed to possess. Because attributing wealth of, say, £20,000 to someone on Income Support would be dismissed as absurd, the government’s statisticians have not dared to do this calculation. They’d be laughed to scorn, as they should be for doing the same thing with state pensions.
But what about occupational pensions, those paid by employers? Most occupational pensions are not transfer payments since they are paid out of a fund that really does exist and which really is invested, among other places, on the Stock Exchange. The government actuary estimated the value of occupational pension rights in 1988 to be £441.6 billion, or on average £21,800 for each of the 20 million people in occupational pension schemes (Economic Trends, November 1991). But the total value of all pension funds is only £330 billion. It is the inclusion of civil service pensions, which are transfer payments, that is the main explanation for this discrepancy. So these must be taken out before we can even begin to take the figures seriously.
Once this has been done, there still remains £330 billions worth of real capital. Who does it belongs to? Legally it is the property of the trustees of the pension fund, who are required by law to manage it in the best financial interests of the scheme’s existing and future pensioners. But this is not the whole story.
Employers are not obliged to set up a pension scheme for their employees, so those that do can be assumed to have done so in what they perceive to be their own best interest; in other words, with a view to enhancing their profits and profitability. Such factors as winning the loyalty of white collar staff, attracting and keeping skilled labour, and having a generally contented, and so more productive, workforce enter into the calculation.
If an employer wants to set up a pension scheme the law lays down that the money to pay present and future pensions must be kept quite separate from the rest of the firm’s capital. Otherwise of course the temptation would be there for the employers, when they needed more capital or when they get into financial difficulties, to raid the money in the pension scheme. In most schemes the trustees are employer representatives wearing another hat and, although few go as far as the late great Robert Maxwell, they sail as close to the wind as they can. The law permits up to 5 percent of a pension fund to be invested in the employer’s business. Employers can also quite legally appropriate a part of any surplus in their pension scheme:

Companies throughout the country are wondering if they can. or should, follow Lucas by siphoning cash from their own pension funds.
The group, based in Birmingham, has swelled its coffers by £150m. using a new rule giving companies access to what has been an untouchable source. The money came at a useful time for Lucas, whose automotive arm has been hard hit by the recession: it reduces the ratio of shareholders’ funds to company debt from 39 to 16 per cent.
Attempted raids on the pension fund are a favourite tactic by finance directors looking to shore up balance sheets and are usually the catalyst for heart-rending schemes in which pensioners, having given the company the best years of their lives, feel distraught. insecure and betrayed . . .
The freeing of the Lucas pension fund surplus results from a change to tax legislation governing occupational—that is, funds linked to employers’—pension schemes. (Independent, 26 November 1991).

There have also been cases where firms have been taken over by rivals hoping to get their hands on the surplus in their pension fund.
So, who do pension funds belong to? As can be seen, a strong case can be made for saying that they belong to the employers who set them up. The existence of the scheme benefits them; they have the final say in how the scheme is run and what benefits it provides; they pay most of the money into the scheme and, as the Lucas case shows, they can get some of it back when there is a surplus. On this view, the funds belong to the employers but are kept, by a legal device, in a fund separate from the rest of the capital of the business.
That there are serious difficulties in saying that pension funds are owned by the workers who receive or are due to receive payments from them is in part recognised by the Inland Revenue itself which excludes them from the figures it issues for the amount and distribution of “marketable wealth”. Their grounds for doing so are that, although in their view the capital in pension funds can be attributed to individuals and then counted as part of their wealth in the same way that they do for state pensions, these individuals don’t exercise full ownership rights over it— they can’t sell it or bequeath it to their inheritors; in short, they can’t “market” it. To get round this the Inland Revenue has invented the strange concept of “non-marketable wealth” as wealth owned by individuals but over which they cannot exercise the basic right of ownership, namely, to sell it!Workers have a more sensible conception of what occupational pensions are, seeing them, not as part of their “wealth”, but as deferred wages paid by their former employers.
Adam Buick
Next month: Do the rich get richer?