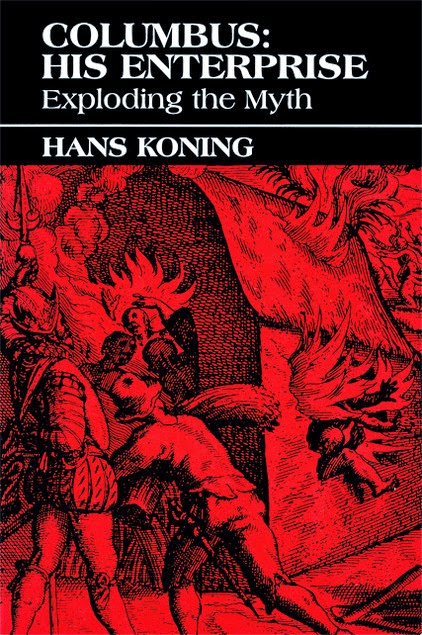 The romance of Columbus sailing the ocean blue in 1492, and the inevitable celebrations to mark the anniversary in 1992, are the subjects of this study which attempts to reassess Columbus and put the record straight on his character and place in history. It also confronts the issue of “civilisation” versus “savagery” and the ideology which sees the West as culturally superior and as the ideal to which all people should aspire.

For Koning 1492, the year in which Columbus supposedly “discovered” a new world already widely inhabited, “opened an era of genocide, cruelty, and slavery”. The motivation for exploration lay not so much in discovery but in the extension and consolidation of the trading rights of rival European powers and in the desire to finance expansionism and acquire spheres of economic influence and political domination.

That the world was round was commonly acknowledged. Columbus’s belief that Asia could be reached by a westerly route was based upon a lamentable and stubborn ignorance as to the size of the world. In his public statements Columbus claimed to be motivated by a desire to convert the “heathen”, although this seems to have quickly given way to a policy of genocide or enslavement. In fact, the peaceful, generous and friendly innocence displayed by the original inhabitants of the “new” world, and recorded by contemporary observers, was to place them in a perilous position. Decisions as to their fate were being made elsewhere. The desire for gold at whatever cost, and the necessity of economic domination, led to a global arbitration by Pope Alexander VI, who divided the new world between Spain and Portugal, although somewhat to the chagrin of France and Holland.

Unaware of this decision, the inhabitants of the so-called new world were not long in feeling the consequences. The later activities of Pizarro and Cortes have been widely documented yet the systematic brutality of the original conquerors should not be underestimated. The rapid annihilation of the Arawaks, for instance, would necessitate the importation of black slaves from Africa to replace them by 1550. As Koning argues, the brutality of the Spanish and, for that matter the Portuguese on the Guinea coast of Africa, persisted until chattel slavery became uneconomic: “men became humane at the very moment inhumanity lost its business advantage”.

As to Columbus, in contrast to his ambitions, the rewards he received were small and mostly honorific, for at this point in the conquest the anticipated gold was not sufficiently forthcoming. In a sense Columbus was as much a product of his time as we are of ours. What we should not do, however, is to hide reality beneath a mythology of the heroic discoverer and the coming of civilisation. But neither should we become complacent in our reading of history. The economic momentum that motivated and legitimized the Spanish conquest of America 500 years ago is the same to which we are victims today.