Book Review: ‘Playing Them False – A Study of Children’s Toys, Games and Puzzles’

‘Playing Them False: A Study of Children’s Toys, Games and Puzzles’. By Bob Dixon. Trentham Books. £11.95. 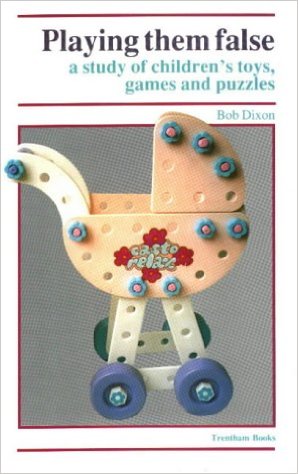 From earliest age children’s toys are clearly divided into boys’ and girls’: the boys’ miniaturising outdoor pursuits, construction and “manly” activities while the girls’ are based on the kitchen and domestic activities.

Adventure kits for boys as young as three are intended to “make little men out of boys” with gear appropriate to various aggressive roles. Take you pick from, among others, the Para Kit. Assault Kit or Tank Commander. Speaking of tanks. Bromley Council in 1981 purchased for its playgrounds fighter plane and tank climbing frames; on the latter there’s a gun which you can fire in the turret.

The first toy soldiers, made of flat tin, were produced in Nuremberg in 1775 and Germany remained the main producer and exporter until the late nineteenth century. By 1893 hollow-casting had been developed in Britain, making the toys cheaper and more widely available. During the 1914-18 war a printed rag-doll soldier called Tommy Atkins became so popular that filename was adopted for British foot soldiers. During the 1930’s khaki-dressed dolls were on sale. Their sophisticated descendant, Action Man, is described in the trade magazine Toys International as “a fully mobile moulded plastic toy for boys which could be equipped for every phase of military service”.

IPC have, since 1975. published a comic Battle (now called Battle Action Force). If you grow up thinking that war is a game it will be easier to persuade you to participate in the real thing when you grow up; the war games entered into by certain groups of adults are evidence of this. Even “peaceful” boys’ dolls such as Star Wars. Masters of the Universe. Power Lords or the latest Turtles craze, stress the desirability of toughness, domination and strength. Books, games. T-Shirts and even cakes and yoghurts promote these toys and keep tills ringing.

As children grow older the process continues with games promoting wars. These arc considered OK as long as they don’t get too near home. When they do, there is an outcry— Waddington’s Bomb Disposal and Mayfair’s War in the Falklands in this country are examples. Avalon Mill’s USA game about the Arab/Israeli conflict was fine when it came out but. with the present US involvement in the Gulf, would be condemned today.

Board games became popular in Europe in the second half of the eighteenth century and, until the twentieth, were mainly concerned with improving morals and teaching children their “correct” place in life (including the superiority of the male and the subject position of women). The suggestion that poverty is caused by laziness often propounded by these games is mouthed with equal hypocrisy by politicians today. Monopoly and Rat Race are about the “desirable” goal for workers under capitalism—the need to succeed when entering the labour market. Role playing and simulated business games arc encouraged in schools and are often sponsored by interested parties such as the Financial Times or banks.