‘The Green Capitalists: How Industry Can Make Money – and Protect the Environment’. By John Elkington and Tom Burke. (Victor Gollancz) 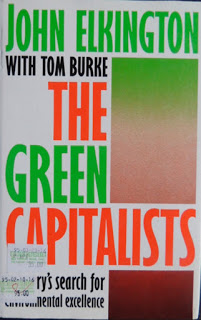 John Elkington and Tom Burke, both involved in environmental pressure groups and public relations work for large corporations, have written a book which documents. industrial sector by industrial sector. the way in which capitalism, driven by the necessity to make profit and expand capital, has systematically despoiled and polluted the environment and harmed the health and lives of workers, either at their place of work or where they live.

The book, for example, contains a lengthy section on the accident at the Bhopal chemical plant in India in 1984 in which 2000 people were killed and tens of thousands severely gassed. We are told how the head of the company tried to place the blame on the Indian government for letting workers live in and around the plant. “It could never happen here,” he told a Congressional Committee convened to look at the implications for the United States. But it did. when just a few days later a chemical cloud leaked from the company’s factory in Institute, West Virginia. injuring 135 workers. Then there is the honest and candid reply from a Corporate Executive at Fords, who, on being asked his views on environmental pollution replied that his only concern was “To make money, screw everything else. This is a profit-making system, boy, the rest is frills”. We are also given detailed reports from health organisations and other similar bodies like the US Economic Development Commission who showed that “some 2500 Californians will die from cancer each year over the next decade because of their exposure to toxic chemicals”.

These facts and figures only add force to the socialist argument that the many social problems facing workers today, including pollution, stem from our subservient class position as propertyless wage-salary earners owning nothing but our ability to work, which they must sell to an employer in order to live. Capitalism is based on the exploitation of the working class in the production process and exists only to make profit and accumulate capital. Workers have no control over pollution, locally or globally, while the state exists only to further the interests of the capitalist class, taking action only when their general or particular interests warrant it. Yet nowhere in their book do Elkington and Burke discuss or come to terms with this social reality: they show little understanding of the economics of capitalism, are ignorant of how or why profit is produced, and are quiescent on the subject of class and minority property ownership, and the relationship of these factors to the problem of pollution.

Instead, the authors offer a Ten-Point Plan of environmental reforms which they believe capitalists can incorporate into their production processes in the interests of the whole of society without endangering rates of profit. It is this poverty of thought which is the most lamentable aspect of the book.

Capitalists only adopt new technologies, working methods or products when it is profitable to do so, not because the existing ones happen to be polluting the planet or killing workers. As socialists, we have always argued the need for workers to take conscious political action to create the framework of common ownership and democratic control of the means and methods of production and distribution, as the only way in which the social problems like pollution can be tackled. It is sheer folly to believe capitalists will adopt an environmental ‘Ten-Point Plan’ if their competitors elsewhere in the world market do not. What would shareholders say to a board of directors which introduced costly anti-pollution machinery or practices if it meant that the company lost its competitive edge and market as a result? Some American capitalists have already pointed this out, as the authors grudgingly admit:

“Faced with a growing number of increasingly protracted environmental conflicts, hardline American industrialists have often called for the removal of environmental safeguards altogether, arguing that, in the final analysis, it is a question of America’s Economy or America’s Environment.” (p.159)

And then, as if to drive this point home, the authors cite a recent survey of 4000 US chemical companies who estimated that if they adopted the latest practicable technology:

“it would cost 139 million dollars, cutting profitability by about 9 per cent causing four plant closures and destroying 261 jobs. If, on the other hand, these companies were forced to go for the ultimate, in the form of the best available technology. the cost would be around 677 million dollars profits would be cut by a third, 20 plants would be forced to close and nearly 10.000 jobs would be lost.” (p.210)

A society which was not constrained by private property, commodity production and buying and selling would use as a matter of course the best possible technology at hand to ensure the safety of those working in the plants and the protection of the natural environment. Social cost would be the deciding factor, not commercial cost. Capitalism is unable to do this and Elkington and Burke, unlike the Corporate Executive from Fords, are themselves green to believe otherwise.