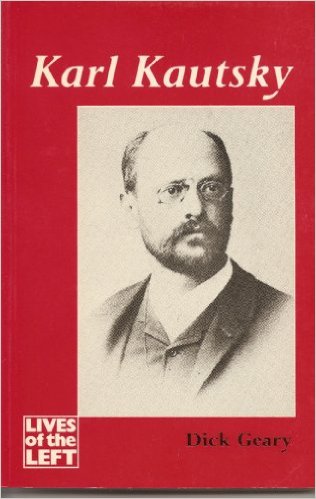 This book on Kautsky, in the Manchester University Press “Lives of the Left” series, is a useful and well-balanced discussion of the ideas, though not the life (but who cares?), of the person who, after the death of Engels in 1895, became the best-known populariser of Marx’s ideas. The first three pamphlets, published by the Socialist Party in 1906 and 1908, were in fact a serialisation of the theoretical introduction Kautsky wrote to the programme adopted by the German Social Democratic Party at its Erfurt Congress in 1891. (Curiously, reference to these pamphlets is not made in the bibliography Geary gives of Kautsky’s works available in English).

As a populariser of Marx’s ideas Kautsky was good, and many members of the Socialist Party learned about Marx’s ideas through reading Kautsky’s Economic Doctrines of Marx and Ethics and the Materialist Conception of History as well as Kautsky’s own application of the materialist conception of history in his Origins of Christianity and Thomas More. His politics were another matter, on which we were in fundamental disagreement with him. As an orthodox German Social Democrat he defended that party’s usage of revolutionary Marxist phraseology while engaging in reformist practice.

After the First World War Kautsky acquired a bad reputation amongst those who considered themselves Marxists. This was because he had opposed the Bolsheviks seizure of power in Russia in November 1917, for which he was denounced as a “renegade” by Lenin. But, amongst real socialists, to be denounced by Lenin was a good recommendation and in fact Kautsky’s Dictatorship of the Proletariat shows a much better understanding of Marx’s views on democracy and socialism than did anything Lenin ever wrote. In spite of his reformism, Kautsky understood that the Bolsheviks were establishing a dictatorship over the proletariat and were heading for state capitalism not socialism.

Geary discusses Kautsky’s views on this point as well as on Bernstein’s revisionism, the mass strike and imperialism and provides a good short introduction to the theoretical issues that concerned pre-First World War Social Democracy from which, after all, the Socialist Party was an early breakaway.