‘The Coercive State’ by Paddy Hillyard and Janie Percy-Smith, Fontana, £5.95 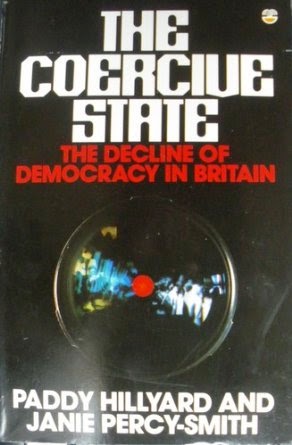 We all live, so the story goes, in a democracy, where governments are elected through free elections, as the result of open political processes in which everyone can participate. The state is supposedly run by democratically-elected politicians who are fully answerable to the electorate and who make relevant information and Government documents available for anyone to read. All citizens are equal before the law and stand to benefit from the state’s welfare policies. Such, at any rate, is the liberal democratic theory, but the authors of this book present a very different picture: of the state as a coercive machine, run by a small, secretive minority and constantly interfering with the lives of ordinary people.

Most people’s participation in politics begins and ends with voting, and electoral campaigns are dominated by the media and the bigger parties, the latter not even being run by their own members. Local authorities have lost many powers to the central state, and information which reaches the general public is filtered by many devices, from outright state censorship to the prejudices of the press barons. The law is used against rather than for ordinary workers, and has instrumental in extending the Government’s scrutiny of individuals and invasion of people’s privacy. The welfare system is more concerned with sanctions and control than with meeting needs. Meanwhile, police powers are expanded, and more and more people are brought before the courts.

It is a devastating catalogue, and makes nonsense of Thatcher’s claim to be “rolling back the frontiers of the state”. To take just one example, one-third of all households in Britain are in receipt of housing benefit, which means that, simply in order to have a roof over their heads, their members must provide the state with extensive details of their daily lives. A recent form for this purpose contains over a hundred prying questions.

The book presents an effective exposure of the democratic pretensions of the state. If it can be criticised, it is on the basis of what is left unsaid. For one thing, it is open to the interpretation that things weren’t quite so bad in the past; that the state was perhaps once less coercive and closer to the liberal ideal. The authors make it clear that they are not just dealing with the post-1979 Conservative government, and have some cogent comments on past Labour governments, such as their use of Special Branch against trade unionists, their meddling in the lives of the poorest claimants and their attempts at censorship. Nevertheless, it is easy to gain the impression that the truly coercive state is a relatively recent development.

Related to this is the point that the reasons why the state functions coercively are left very much aside. This is important, because concentrating on specific instances might suggest that, if these were altered or removed, the state would be properly democratic. There are some passing reference to the state acting in the interests of the political and economic elite, but no spelling out of the fact that the state exists and is used to defend the interests of the capitalist class. That is why the state can never be democratic, because it is not just a coercive state but a capitalist state.