Book Review: ‘The Strike Weapon – Lessons of the Miners’ Strike’ 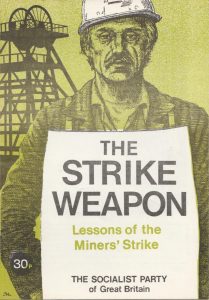 The past year has seen the publication of a variety of books, pamphlets and articles on the miners’ strike. They range from pedestrian accounts written by capitalist commentators who are more concerned to dwell on the personalities and the tedium of isolated events to the retrospective manifestoes of the leftists who believe that the strike would have been won if only the leaders had listened to them. Despite the nonsense and superficial analysis which has been written about the strike, the importance of that industrial battle between the NUM and the capitalist state in the history of the class struggle in the 1980s cannot be denied.

The Socialist Party’s new pamphlet, The Strike Weapon—Lessons of The Miners’ Strike does not offer an account of what happened during the strike; socialists are not out to record history, but to interpret it with a view to positive action. Neither does the pamphlet seek to advise the miners — or any other trade unionists — how to win strikes. The function of The Socialist Party is not to give uninvited advice to workers fighting over the terms of wage slavery — how the trade union struggle is fought must be decided by those involved, not by preachers from the sidelines. In its four chapters this pamphlet deals with four basic themes. Firstly, it is shown how the nationalised coal industry — like all nationalised industries — is state capitalist. With a wealth of evidence, not to be found in any publication on sale today, the first chapter demonstrates that the NCB is a state-capitalist institution and that nationalisation is but another way of administering the exploitation of the working class. Secondly, the pamphlet examines the role of the state and shows that it is capitalists, coercive, non-neutral. Years ago Marx stated that the state was merely the executive committee of the capitalist class—our pamphlet gives new, powerful evidence to justify that. Thirdly, the pamphlet deals with the strike weapon — a useful and necessary weapon, but one which should not be overestimated within the confines of the wages system where the exploiting class will at best only concede crumbs. Fourthly, and most importantly, the pamphlet asks the question: What is the alternative? This is not left vague or hidden. The meaning of socialism is stated with clarity and the urgency of organising for it is the lesson of this pamphlet. At 30p a copy this document should be in the hands of all workers; don’t just buy one, pick up a dozen or more and get them into the hands of friends and workmates.

Supplies are obtainable from your local branch or group or from 52 Clapham High Street, London SW4 7UN. And while you’re at it, don’t forget to obtain the new pamphlet, From Capitalism To Socialism and the latest issue of the international journal of the World Socialist Movement, The World Socialist.