Book Review: ‘The Postman of Nagasaki’

‘The Postman of Nagasaki’, by Peter Townsend (Penguin, Harmondsworth, 1985) 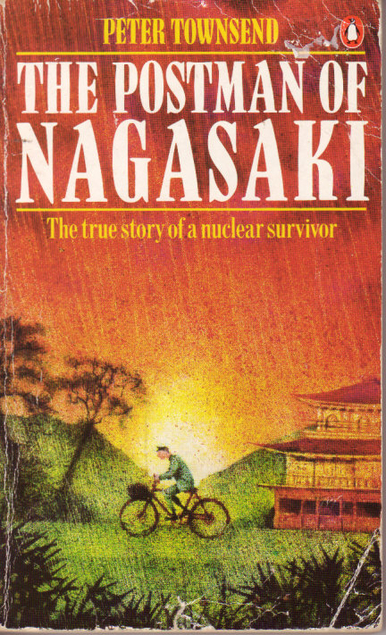 Some forty years after the bombing of Hiroshima and Nagasaki it is easier to objectively assess the circumstances in which those actions took place. Townsend reminds the reader of the individual caught up in such circumstances and provides a vivid account of the life of Sumiteru Taniguchi who was a sixteen-year-old postman delivering letters in Nagasaki at the time the bomb was dropped. Townsend’s intention in writing this biography is to suggest that “if the deterrent is ever used, it will be the end of us and our planet”. It represents a moral plea on behalf of one man as a symbol of the many who suffered. At the same time it provides a useful, brief history of Japan’s involvement in the Second World War and catalogues the atrocities perpetrated by that nation in the course of its attempted expansion in Asia.

Townsend’s work is a reminder of the contempt with which working people are treated and how this is epitomised during a war. His analysis of the circumstances leading up to the two nuclear attacks is one in which the majority of the population are pawns in a game played by detached leaders:

“such were the men who debated the vital issue, war or peace — the elect and the all-powerful in whose hands lay the fate of the ordinary people, young Sumiteru among them, boys and girls and all the rest as innocent as he. The trouble with the top men was that they saw the people whose destiny they sought to shape as an anonymous mass or a bunch of statistics.”

Sumiteru is a victim of the propaganda of the education system, of a government which refused to acknowledge the inevitable defeat to which it was being subjected and, for Townsend particularly, the callous indifference to the Japanese people exhibited by President Truman. Even before the attacks on Hiroshima and Nagasaki it ought to be remembered that Japan had been subjected to horrendous aerial bombardment. Nagoya was bombed after an earthquake. General Curtis Le May had initiated a programme of napalm attacks because of the dispersed private workshops that marked the nature of Japan’s industry:

“Le May despatched, on the night of 9 March, over 300 B29s. Their orders were to set fire to the heart of Tokyo, where, in houses made of wood and paper, there lived, until that awful night, a quarter of a million low-paid workers. By dawn, 130,000 of them with their families lay strewn about the city in heaps of charred, unrecognisable corpses.”

Similar attacks were also carried out on Kobe and Osaka. Japan was a defeated nation. Its steel and chemical industries were on the verge of collapse and it was running desperately short of oil and food. Truman’s advisors had misgivings about the atomic bomb and that included Secretary for war, Harold Stimson, and General Eisenhower, Commander-in-Chief of the allied forces in Europe, but according to Townsend “Truman made the dropping of the atomic bomb a certainty—as indeed he had always intended”.

The second part of this work concentrates on the plight of Sumiteru. It is not for the squeamish, as Townsend spares no detail including for instance Sumiteru “lying in a sea of pus” as a result of the hatching of maggots from the eggs laid by flies in the raw flesh of his back. He also catalogues the prejudices exhibited against the atomic bomb victims by the Japanese, who feared the consequences of the radiation to which the victims had been subjected as well as being appalled by their physical injuries. Similarly the US occupation authorities imposed heavy censorship as regards the death and destruction wrought by the new weapon, although references to the weapon as being of unprecedented power were welcomed. There was also suppression of details concerning the medical treatment of the victims. This was particularly applicable to Japanese doctors and scientists. Since then a fuller picture has emerged. Those exposed to radiation were found to have a greater susceptibility to leukaemia, cancer of the thyroid was five times more common, lung cancer was twice as common, breast cancer four times higher than the national average and the young were vulnerable to cancer of the salivary glands. Added to this were such effects as an increase in eye cataracts among victims and an increase in still births and birth deformities among those pregnant at the time of the explosions.

Townsend argues that “the magnitude of destruction amounted, as no other weapon has ever achieved, to genocide as well as sociocide, ecocide and biocide—in brief, the negation of life” and that may well be correct. But it is the circumstances that gave rise to the use of that weapon that must be examined. The atomic bomb represents an atrocious addition to capitalism’s panoply of weapons. The willingness to use that weapon, and the way in which it was used, highlights the total indifference with which human beings are treated during war and that only highlights the way in which the vast majority of people are treated in capitalism generally. There is a tendency to simplify and Townsend quotes Sumeritu as seeing the world as being “divided by political ideologies and the lust of a few men — and women — for power”. It is the conflict arising out of the competitive nature of capitalism that legitimises the activities of world leaders who act out the logical consequences of that system. We can be horrified and disgusted by those actions and even morally repelled but nonetheless they must be seen as an outcome of capitalism. In that respect our outrage ought not to be directed solely at the weapons or the leaders but against the system of society which would contemplate, let alone use, such weapons. Sumiteru is the victim of a society in which he is expendable in the conflicting interests within the capitalist system. He is a witness to the extent to which the system us prepared to defend itself.