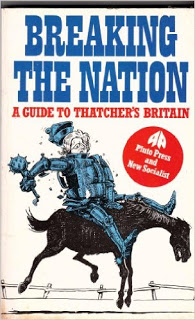 Breaking the Nation A Guide to Thatcher’s Britain Edited by Tony Manwaring and Nick Sigler. Pluto Press and New Socialist.
This book has been researched and written by fifteen members of the Labour Party Research Department. and its title sums up its purpose — to blame what has happened in Britain since 1979 on the Tories, and in particular Margaret Thatcher. As such it is not a serious political analysis but a 240-page political tract that could provide material for numerous Labour Party political broadcasts.
The authors’ approach and their whole attitude to politics can be seriously questioned. They seem to have started with a pre-conceived notion and then only sought information to support it, disregarding other material. The argument is that Thatcher = Tory = Uncaring of social problems; therefore Thatcher is the cause of our problems. This idea that the fault lies with certain personalities in the government can only harm the attempt of socialists to turn workers’ minds away from petty party squabbles and to look instead at how society functions regardless of who governs.
There is no doubt that recently the working class in Britain have been suffering cruelly. But this observation can be made of nearly all countries in the world. These other countries do not have Thatchers or Tories and some even have governments that carry out policies identical to those which a future Labour government would apply in Britain. The world economy as a whole has been going through a depression and Britain has been seriously affected because it is more dependent on selling goods on the world market than most other countries.
The book examines many aspects of the Thatcher government and the result is very embarrassing for any Tory. Official government statistics are used to show how the Conservatives have failed miserably in a whole range of the aims and goals published in their election manifestos. Claims to create “real” jobs, to wipe out inflation, reduce taxes, reduce crime, and to decrease centralised bureaucracy by giving people more control over their own lives, are all past promises that hang heavy around the necks of the Thatcher crew. Sadly, the impression is given that these policy aims could have been achieved if only the government was made up of Labour and not Tory politicians.
Because the authors do not envisage a society free from the restrictions of the market their thinking is trapped in the logic of capitalism. To them, what is wrong with society is not the market system but rather a particular version of it — the free market version. In particular, the book shows that the Labour Party embraces the nationalist ideology of most workers:

British industry needs to invest in modem technologies if it is to have any chance of competing in world markets (page 96).
It (the 1984 budget) made manufacturing investment less profitable (page 83)
Tory monetarism has made British industry less competitive than ever before (page 91).
For the first time ever in our industrial history Britain now buys more manufactured goods from abroad than it can sell overseas (page 89)

The Labour Party solution — to rebuild Britain’s manufacturing base and sell more goods on the world market, thus stimulating job growth in Britain at the expense of workers abroad — is one that could come from any other capitalist party. Much is also made of the decision of the Tory government to abolish exchange controls, which facilitates British capital investment overseas rather than in Britain. Even more is made of the fact that British goods are about 20 per cent less price-competitive against foreign currencies (other than the dollar) since 1979. Such blatant nationalist propaganda is in direct opposition to the socialist case, which requires the abandonment of workers’ nationalist prejudices and an acknowledgement of the interests of their class worldwide. If you accept the logic of the profit system then the Tories seem to have the most logical policies: free movement of capital and labour appears to suit the needs of capital accumulation.
The authors, then, are not against the profit system — they simply attack its inefficient operation in Britain. They barely mention socialism, which, to them, is capitalism with full employment. Britain outselling commercial rivals, plus Labour leaders in power to administer the system on behalf of the “British people”. In other words, it is the claim that Labour can make capitalism do what the Tories cannot.