would be led to the conclusion that a crisis has come about. For example Peter Jenkins, in an article in the Guardian (21 May 1980) stated that:

the crisis in the prisons goes deeper than the overpopulation of rotting Victorian gaols. The Prison Service has lost its purpose and imprisonment itself a good deal of its previous moral rationalisation and the result is that there is no longer any means of justifying prison conditions in Britain; they are, quite simply, uncivilised and inhumane.

Jenkins seems to suggest that the prison system could once have been defended on a moral and rational basis but that somehow something has gone adrift. What can be emphasised is that prison conditions are appalling and that those people who are the victims of those conditions, especially if serving life sentences, do, according to Home Office Research Study 51 Life Sentence Prisoners, become increasingly introverted, obsessed with the past and institutionalised. Mental breakdown is not uncommon nor is the use of drugs as a means of keeping the prison population calm.
Imprisonment has existed as a form of punishment since the thirteenth century but it is not until the eighteenth that we begin to find prisons which approximate to the present-day set-up. Before the eighteenth century prisons had been used for keeping people who were awaiting trial or a place where someone could be housed while awaiting his punishment. There were also debtors prisons. With the decline of transportation, due to the refusal of colonies to be the dumping ground for British offenders, we see the development of penal establishments. Between 1840 and 1860 sixty new prisons were built to supplement local gaols. These local gaols had been run for private profit, although supposedly under the control of the local authority. New prisons were of single cell design and this was to become the pattern. Single-cellular confinement had been introduced because it was felt to be a stricter form of punishment. In 1823 a parliamentary committee allowed candles to be used in all cells and also called for educational opportunities. Jeremy Bentham had also argued for education in prisons and had spoken of a need for prisons to be like schools in which offenders could be instructed in useful branches of basic learning. He had also argued that offenders should be taught some basic trade whereby they could earn their livelihood on release. Elizabeth Fry, working at Newgate from 1916, had attempted to provide some form of employment and religious instruction for women, although only for those who were temperate, clean and capable of decent conversation. She had also provided schooling for the children of inmates.
In 1865 cellular confinement was made the rule after the style of Pentonville built in 1842. The Caernarvon Committee urged that conditions should be made terrible for the inmate and proposed ‘hard labour, hard fare and a hard bed’. Education which had taken place in Pentonville and Millbank was stopped. From 1877 prisons came under the authority of the Home Secretary and made subject to public finance. Hard labour and solitary confinement were continued.
In 1898 the remission of sentences was introduced. Some corporal punishment was abolished as were the treadmill and the crank. In 1907 the Probation of Offenders Act was passed and 1908 saw the Prevention of Crime Act which introduced borstal training for the 16-21 age group. Borstal training included formal education and gymnastics. Juvenile courts were introduced in 1908 and these dealt with offenders under the age of 16. In 1913 the Mental Deficiency Act was introduced which made an attempt to cut down the number of offenders in prison who were psychologically disturbed. The Criminal Administration Act (1914) attempted to reduce the number of debtors in prison by allowing time for fines to be paid. This policy has been continued by the Money Payments Act (1935) and the Criminal Justices Act (1967). The 1948 Criminal Justice Act cut out penal servitude, hard labour and corporal punishment and also introduced Detention Centres and Attendance Centres.
As can be seen the major intention of most of the acts of the twentieth century has been to cut down the number of offenders within the prison system. There has also been a growing emphasis on the need for reform, training and treatment of convicted prisoners to instil in them the will to lead “a good and useful life” on discharge.
At this point it is perhaps as well to ask who are the offenders and what crimes have they committed. This is best judged by reference to the type of offence recorded by the police in England and Wales as shown in the table below: 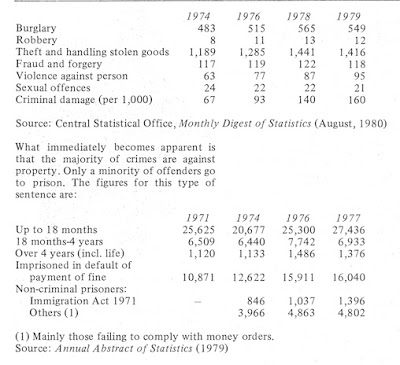 What should be emphasised is that the majority of prisoners serve short-term sentences. Although attempts have been made to cut down the numbers of prisoners who are debtors, yet there is a sizeable prison population made up of those who have defaulted in payment of fines and those who have failed to comply with money orders.
Since the period 1964-66, in which there was a series of dramatic escapes, prisoners have been categorised in accordance with security. The guidelines were laid down by the Mountbatten Report (1966). Category A prisoners are said to be those whose escape would be highly dangerous to the public, police or state security while category B represents those who need less secure conditions but to whom escape must be made difficult.
Category C includes those who are not to be trusted in open conditions but who do not have the ability or resources to make a determined escape attempt. Finally category D represents those who can be trusted in open prisons.
Education is now common in prisons and a Home Office Policy Statement on Education in Prisons (1969) argued that:

the purpose of education in prisons is really the same as its purpose outside, namely, to help a person to have some understanding of himself, of his fellow men and of the world in which he lives and works; to acquire a skill, trade, or profession, and to pursue it successfully; to use time in ways which arc useful, acceptable and satisfying; and generally to illumine his personality.

In that sense the purpose of education is social indoctrination but again if that is the purpose of prison education then the failure rate is enormous. Much of the prison population is made up of people who are unable to cope with modern industrial life and to them prison represents a form of relief. What must be emphasised is that the crimes that are committed are related to the way in which society is structured. Laws are not based on some eternal moral code of behaviour but exist as an apparatus whereby the structure of society is maintained. Within contemporary capitalist society the basis upon which that structure is built is a consequence of the economic relations that exist within society. This is the point that Engels argued in Anti-Duhring:

the economic structure of society always forms the real basis, from which, in the last analysis, the whole superstructure of legal and political institutions as well as the religious, philosophical and other ideas of a given historical period is to be explained.

The law preserves the rights of private property and for this reason the vast majority of crimes are crimes against property. Ultimately the function of the law is the preservation of the class ownership of the means of production and distribution and, by necessity, this includes all products associated with that production. To say that the prison system has lost its moral rationale is to misunderstand the conditions that have given rise to the system.
The prison represents a form of coercion. Its purpose is to affect human behaviour. For the most part prisoners are those who have broken the property laws and rights of capitalism and they are punished as a warning to others who might also feel inclined to reject those laws. By the same token the punishment of the offender is also expected to involve some form of socialisation so that the offender will return to society as a ‘reformed character’ ready to embrace the property laws against which he had previously acted. What those property laws signify is a means by which the vast majority of the population are denied access to the potential that society is capable of producing. To say of the prison system that it treats the offenders badly is to miss the point. The existence of the prison system is a constant reminder to the working class of its subservient role within society. The prison is a weapon for the maintenance of the iniquitous system of social relations of capitalism, in which the majority are denied access to the wealth they themselves have created.
Philip Bentley