Marx and the Anarchists 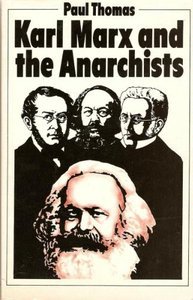 This excellent book is a running commentary on Marx’s fierce battles with crackpots he regarded as disasters to the socialist movement: the anarchists Max Stirner, P. J. Proudhon and Michael Bakunin. One of its principal merits is that it debunks, with the support of voluminous and correctly interpreted quotations, the idea that Marx was a dogmatic old bully, hopelessly impatient and irritable with anyone who dared to dissent from his views.

Stirner’s sole claim to fame is his book, The Ego and his Own, which was purported to be a rebellious challenge to all the established institutions but is actually a pathetic rehash of Hegelian idealism. The greater part of The German Ideology, Marx and Engels’ “settlement” with German philosophy, consists of the reply to “Saint Max”, as they called him. Proudhon wrote so much, with so many contradictions, that it is impossible to list them all. Suffice it to say that one keen observer (Albert Hirschmann) has pointed out that Milton Friedman’s arguments today were originally put forward by Proudhon in the 1840s. Bakunin was opposed to writing, on the grounds that “action”, not books, was necessary (although he did write a partly autobiographical work, and the short God and the State).

All three anarchists did immense harm to the socialist cause, Stirner, with his ridiculous “personal rebellions”, opposed any form of organisation or educational work, as did Bakunin and Proudhon. The latter spread more confusion than anybody in France, with his opposition to strikes, trade unions and political parties; while Bakunin succeeded in having the First International dissolved by Marx’s supporters rather than allow it to be turned into a terrorist conspiracy practising robberies and assassinations. Each one of them extolled the virtues of the criminal lumpen-proletariat who, they claimed, were the real “rebels” because they had “nothing to lose”; Bakunin went so far as to advocate arson, brigandage and burglaries.

No supporter of the Socialist Party of Great Britain who reads the book can fail to be struck by the correspondence of Marx’s replies to these anarchists with our Declaration of Principles. (For example, Marx’s reference to the “parliamentary idiocy” of the German workers’ movement in 1879: “The point was not to pursue the franchise as though it were a Workers’ Holy Grail, but to transform it from the institute of fraud . . .  into an instrument of emancipation”, p, 345.) Thomas also shows that, on the questions of democracy and working class understanding Marx shares our, and not Lenin’s view: “We cannot, therefore, co-operate with people who openly state that the workers are too uneducated to emancipate themselves” (1879).