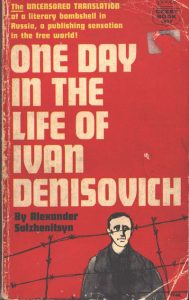 Alexander Solzhenitsyn, the Soviet novelist, is a “prophet without honour” in his own country, while in the West his magnificent novels are bestsellers and one has received the ultimate accolade: it has been made into a film.

We are not concerned here with his stature as a writer but rather with the way he adds to our sketchy knowledge of Soviet society.

In 1945 he was sentenced to 8 years for comments he made about Stalin. His first year he spent working on construction sites around Moscow. He was then transferred to a secret research establishment—which he describes in The First Circle—but in 1950 he was transferred to a camp for political prisoners at Karaganda, in Central Asia till his life in 1953. “One Day in the Life of Ivan Denisovich” was published in Russia in ’62 in Novy Mir, but his other novels only circulated in manuscript form among friends till they reached the West,

His three novels dealing with the Soviet scene are One Day . . . , The First Circle and Cancer Ward. Respectively they describe the world of the manual worker, the intellectual and the chronically sick.

In One Day we learn how starving and frozen prisoners labour on a construction site (temperature minus 39 degrees), queue for fuel, munch their ration of dry bread and try to wangle a smoke or an easy job. As in the outside world, “you feathered your own nest as best you could”. You knew that you were cheated of your rations by all who handled them. Graft was everywhere, and so were the informers. But prisoners spared their energy, needing it for survival. 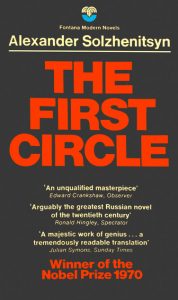 In The First Circle, he describes an expensive top-secret research institute in Moscow where class enemies, saboteurs and other top scientists, imprisoned in the Thirties and Forties, enjoyed relative luxury. Yet the State is cruelly oppressive here too: the cruelty is of a different type, that’s all. At Karaganda it was physical cruelty—hunger, cold and overwork; at Mavrino it is psychological—pressure to meet impossible deadlines successfully, dread of a transfer back to labour camps and fear for their persecuted families. As at Karaganda, and as in all parts of Russia, informers abound—the hallmark of a police state.

If you ever wondered what has happened to ordinary Russians, these books will tell you much. In the two books together, Solzhenitsyn has covered a lot: from the lowest camp drudges, the wives at home on the collectives, ex-Party members who helped collectivize the countryside at gunpoint and their wives, unable to get work without disowning their husbands, right on up through the secret service rat-race to the Minister, Abakumov, and the Immortal One himself. 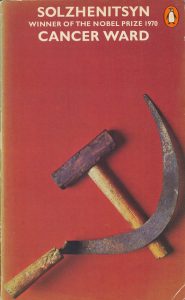 Finally in Cancer Ward he underlines the idea that his real subject is not a prison society but Soviet society. The whole of Russia is a sick society, all alike are sick—doctors and patients, jailers and prisoners. All Russia is a prison where every fifth man is an informer.

For all Russians, he says, life is an endless sentence without amnesty, measured by months of deprivation and humiliation. The proletarian is everywhere a prisoner of the system: we are all doing time. Some prisons are plush like Mavrino “the first circle of hell.” Others are unspeakable. His explanation of the lush conditions at Mavrino applies equally to the so-called middle-class here: “It has been shown that the better sheep are fed and looked after, the higher their yield of wool.”

Solzhenitsyn earned the right to claim: “I’ve got an advantage no spy can make me lose: what I’ve been through, and seen others go through, should give me a good idea of what history is about, don’t you think?”

Any who doubt the existence of these camps is welcome to try to organise a Socialist Party of the Soviet Union: the only Socialists he will meet there will be in the camps, the special prisons and the psychiatric hospitals. And it is no more safe to talk in prison, than it is outside.