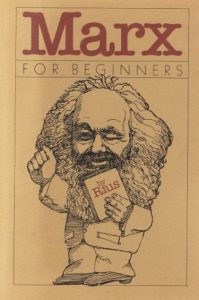 It had to come! Marx in comic-strip form! Friend Rius’s amusing booklet has already achieved a high circulation in many countries. As a way of popularising Marx’s teachings it has much to commend it, and is not to be despised.

Despite a certain number of flaws (one-third of the world is not Communist) in keeping with common misconceptions, some of it is quite impressive. The potted review of the History of Philosophic Thought is heroic; and, despite the author’s protestations to the contrary, shows considerably more than a nodding acquaintance with the subject.

The idea of sprinkling his cartoons and text with the actual writings of Marx (and Engels) is inspired, and the exposition of surplus-value novel. Marx’s himself expressed the view that unlettered working men frequently understood his stuff much better than erudite Prussian professors; so that our author’s modest claim not to have yet unravelled all of Marx need not detain us.

The flaws? First, there is not Communism in Russia. The conclusion of the book, which attributes a synthesis of Marx’s ideas to Lenin, is thoroughly misleading. Second, Marx did not say anywhere that “Capitalism was on the road to final collapse”. In fact Rius himself refutes this in another place by exploding the notion that Socialism comes about automatically. The so-called “immediate measures” in The Communist Manifesto were not Socialist measures – and, lastly, Marx was not “a tough guy who knew how to command”. In his personal life he relied entirely in reasoned discussion, as every Socialist is bound to do.

Apart from these things – very readable; most amusing; to be read with the critical appraisal characteristic of the modern Socialist.