Book Review: ‘The English and Immigration’

‘The English and Immigration’, by John A. Garrard. Oxford University Press for the Institute of Race Relations. £3.25 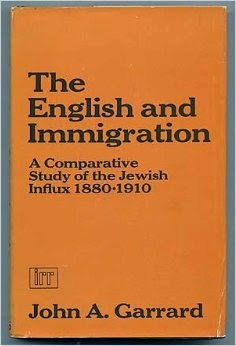 It is well within living memory that the Fascists were ranting on street corners about the threat to our culture, our prosperity, our health, posed not by coloured immigrants but by Jews. They told lurid stories about creeping Jewish control of the country; about their dirty habits; about their sexual prowess. Workers who were beaten, confused and angry at what capitalism was doing to them were easy game for this type of malicious propaganda. They were looking for a scapegoat; they found it in the Jew, as their children find it now in the coloured immigrant.

The influx of Jews fleeing from persecution and poverty in Eastern Europe between 1870 and 1914 was one of the two major movements into this country during the past 75 years. The other, of course, was the coming of the Commonwealth immigrants after 1948. Inevitably there are similarities between the two, between the reasons for them, the reactions they aroused and the official way of dealing with the situation.

In the case of the Jews, the great majority went into trades which were experiencing a belated conversion from domestic to factory production – boot-making, tailoring, cabinet making. The immigrants provided a handy pool of labour to carry over the transition and were subjected to the infamous sweating system.

One trade union leader complained in 1894 that the Jews worked for fifteen hours a day ” . . . on cold coffee and bread and cheese . . . ” By a process of “reasoning” which we are by now familiar with, popular prejudice quickly arrived at the conclusion that, as the Jews tended to work in sweated trades, they must have originated them. The truth—that sweating was practised in many trades which had scarcely heard of immigration—went almost unnoticed in the hysteria of prejudice.

The official answer to this was the Aliens Act of 1905, which was guillotined through Parliament and celebrated by the Bethnal Green Tories with a great firework display. A year later the Liberals were in power and they tended to emasculate the Act—unlike the Labour government of 1964 which, while paying lip service to international brotherhood, outdid its Tory predecessor in racist legislation.

John Garrard’s is a well researched, very readable, book which makes our case — that the prejudices of capitalism do not change and are not to be changed by the lawmakers. Here, for example, is a judge speaking in 1903, in sentiments which might come from a Powellite today:

. . . we have the riff raff of the whole world pitch-forked into this country, and we spend days and days at the Court every session trying these disreputable foreigners.

Not that those who claimed to be socialists were exempt from the charge of prejudice. Garrard has a passage on alien immigration and the new left which illuminates the confusion and racism among the unions and the “labour” movement. The Tics of 1893, 1894 and 1895 passed resolutions against the landing of “pauper aliens”, which was as nice a way of avoiding saying what they meant as the currently fashionable support for immigration control on the grounds that England is overcrowded.

If the prejudice of capitalism remain unchanged this is because the system does not alter basically. Nor do its problems, nor the confused and ignorant attempts at dealing with them.